One of Germany’s market leaders in drilling and oil and gas production with over 110 years of industry experience, RWE Dea operates as a division of the RWE Group, one of Europe’s largest energy corporations:

“The main strategic goal for RWE Dea now is to strengthen the business so that it can achieve the target of producing 70 million barrels of oil equivalent by 2016,” Thomas Kainer continues.

Though the German domestic market still represents the backbone of the company, RWE Dea does possess a strong market presence in several other European and North African countries: “The company is involved in production in the UK, Denmark and Norway, where it is seriously increasing its self-operated production,” Thomas says. “Egypt is another country where the company is making some serious inroads into gas field development and production. RWE Dea is currently in the execution phase of establishing an onshore gas field development futurein the region, and this is planned to commence operations in early 2013.”

Closer to home, the company acts of the operator of Germany’s largest and most productive oil field, the Mittelplate, situated in the Wattenmeer National Park in the state of Schleswig-Holstein. When production began in 1987, the Mittelplate reservoirs contained approximately 110 million tonnes of oil, 50 per cent of which is recoverable. To date RWE Dea has extracted well over 25 million tonnes of oil, retrieved through a series of complicated, expertly constructed wells (e.g. multilateral wells), bringing production levels to a much higher rate than ever seen before. 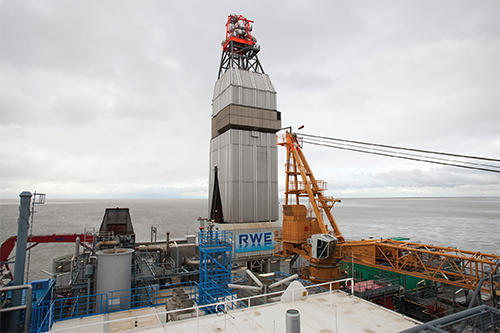 In July 2011, RWE Dea announced that the field development plan (FDP) for its operated Breagh gas field had received unconditional approval from the UK’s Department of Energy and Climate Change. Located 100 kilometres east of Teesside in the southern North Sea in water depths of up to 62 metres, the Breagh field is being developed in two phases, the first of which involves the export of gas via the pipeline linking the Breagh Alpha platform to Coatham Sands on the UK mainland. A ten kilometre onshore pipeline will then transport the gas to the Teesside Gas Processing Plant at Seal Sands, after which it will enter the UK National Transmission System. The second phase, expected to receive FDP approval in early 2012, is then expected to include the drilling of additional wells in the east of the field, drilled from a Breagh Bravo platform and tied back to Breagh Alpha.

The Breagh field is a conventional carboniferous reservoir, of which RWE Dea holds a commanding 70 per cent interest as operator: “It is the view of the company that Breagh will play an essential part in realising its strategic goal of boosting annual oil and gas production by 2016. Not only will the expected reserves make a significant contribution to the growth of the company’s gas production, further upside potential is expected to be found in the surrounding exploration blocks,” Thomas highlights.

Looking over the history of the company, Thomas feels that there are several qualities possessed by RWE Dea, one of the most important being its ability to operate in unique and environmentally sensitive locations: “The Mitteeplate itself is an artificial island located in the middle of a world heritage zone. To comply with all the rules and regulations that go with working in such an area the company has to conduct a vast number of studies into everything from the flight paths of local birds to lowering the level of light emissions that the facility produces. RWE Dea takes each and every task in undertakes and its responsibilities extremely seriously, as anyone can see from the work it carries out at the Mittelplate.”

Now with an increasingly important role to play in the future of Germany’s oil and gas industry, Thomas concludes that the next several years will help to further define the legacy of the company: “The majority of the work RWE Dea is currently carrying out is fundamentally designed to achieve the production target it has set itself for 2016. The by-product of this is that it will provide an opportunity for the company to grow substantially in size and turnover in the next couple of years.”