SAL Heavy Lift GmbH, a member of the “K” Line Group, is one of the leading carriers worldwide specialised in the transportation of heavy lift cargo.

This includes equipment for the oil and gas industry, offshore wind, cranes, heavy machinery, and floating cargo. The company is headquartered in Hamburg, and maintains an international network of agencies and subsidiaries in Japan, China, Australia, UK, Finland, Singapore, the Netherlands, and the US.

In order to deliver its services SAL Heavy Lift owns and operates a fleet of 16 modern heavy lift vessels. These are characterised by their lifting capacities of up to 2000 tonnes SWL, low draft, voluminous intake capacity, and high speed of 20 knots. “We also have an in-house engineering department which develops innovative transportation solutions for individual customer requirements,” adds Lars Rolner, CEO and managing director of SAL Heavy Lift.

“One of our great advantages is our fixed crew, which is employed by the company, and is well-educated by the “K” Line Maritime Academy,” he continues. “We have developed a very strong corporate identity throughout the entire organisation, and always comply with the highest industry standards, with all staff trained and briefed according to task. Safety is our highest priority in all aspects of our business and is never to be compromised upon.”

Turning his attention to the areas where SAL Heavy Lift has seen the most growth, Lars says: “Apart from our heavy lift semi-liner service from the Middle East to Far East, and vice versa, SAL Heavy Lift is deeply involved in a number of larger projects involving lifts of above 1000 tonnes. This includes the loading of a living quarter of 1425 tonnes, and measuring 42x37x36-metres – a total of 54,353 cbm, in Rotterdam, the Netherlands. With a tight timescale of just two weeks planning and preparing, SAL Heavy Lift was able to make all of the necessary arrangements. This included the design, manufacture and certification of tailor-made equipment, and MV Svenja’s standard equipment also had to be adapted to this unique job.

“After loading the living quarters from a barge into the hold, the vessel transported the cargo with an open hatch and overhang of 20-metres to Geoje, Korea. Due to the huge co-operation of all involved parties, the project was completed within the expected time frame.” 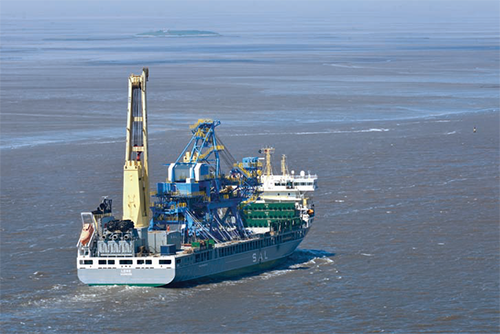 Meanwhile, the MV Lone has recently broken the Bremen port record for its heaviest cargo to date, as Lars elaborates: “This was for a ship loader of 775 tonnes, measuring 57.89×23.20×34.80-metres, which had been built directly on site at the Port of Bremen, which is Europe’s biggest port for heavy cargo. The biggest challenge was to keep the ship loader’s balance while being lifted, so to generate counterweight special water pockets, each capable of holding up to ten tonnes additional weight, were fixed on the cargo and regulated during the whole lifting operation.

“In this way, a safe embarkation was ensured. The entire loading was completed successfully in only three hours due to the excellent co-operation of all parties involved. After two more days of thorough cargo fixing, MV Lone made its way to Port Cartier in Canada, where the ship loader was discharged smoothly,” he continues.

At the end of 2012 MV Lone was awarded its first offshore installation contract to be undertaken using its DP2 system. The success of this project saw the vessel win one of its most high profile projects – assisting with the removal of the Costa Concordia wreck.

The Lone transported and installed several of the large platforms that the wreck now rests on, the largest of which weighed 1000 tonnes. Furthermore the MV Lone installed all the sponsons on the port side, which assisted in the righting of the vessel and ultimately the re-floating of it. The final part of the contract was the largest lift of all – the blister tank. This structure was ultimately attached to the bow of the Costa Concordia to assist with re-floating but also to ensure the bow didn’t break off during the righting process. Weighing 1500 tonnes and comprising of two hinged sections, the complete unit was lifted using both the vessel’s cranes from a barge and set down on the water for towage to the wreck.

The general freight market may be under pressure with rates particularly competitive, but within SAL Heavy Lift’s niche segments business remains good. Describing the changes that have been made in the company throughout the year, Lars notes: “We have established SAL Offshore B.V. in the Netherlands, which with a dedicated team of well experienced commercial engineers and HSEQ people originating from the offshore industry, will bring our company the expertise needed to successfully operate in the offshore field.”

He concludes with SAL Heavy Lift’s overarching vision: “We want to expand further and grow within the super heavy lift market and the offshore installation segment. With our modern fleet combining transportation and offshore installation, we see great potential for the installation of mooring spreads, transition pieces, foundations, tidal turbines, and oil and gas equipment.”