From biomass to natural gas

After successfully securing $165m in capital funding, work is now underway at San Joaquin Renewables LLC for the rollout of what is set to be an innovative gasification project

Tucked away in Kern County, California, a project is underway to revolutionize the world’s relationship with natural gas. Known as San Joaquin Renewables (SJR), the project involves the design, building and operation of a facility for the conversion of agricultural waste biomass into approximately 30m gasoline-gallon equivalents of fuel per year.

Based in the town of McFarland, this facility is the brainchild of Frontline BioEnergy (Frontline). Launched back in 2005, Frontline has a long history in the design of systems and proprietary equipment for biomass gasification. Already with a glittering history of successful project development – notably, its work with the Chippewa Valley Ethanol Company (CVEC) for an ethanol plant boiler in Benson, Minnesota – and a mission to become a global leader within its field, SJR is Frontline’s first venture into a project developed and operated entirely in-house. 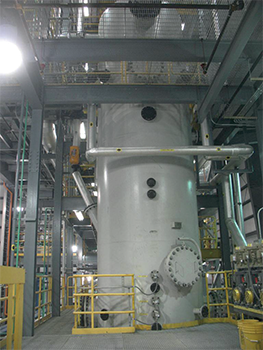 It was in 2009 that TJ Paskach, now President of SJR, and Chief Technology Officer at Frontline BioEnergy, first joined the company. He did so at a difficult time for Frontline, as the onset of the financial crisis and the success of fracking brought an end to rapidly increasing prices for natural gas. With a market strategy predicated on the production of renewable fuel gas for the ethanol industry, Frontline was forced to pivot towards new outputs. To do so, the company invested heavily in research and development.

“We reinvented ourselves,” TJ says. “Gasification can be more than just making boiler gas; if we can create higher-quality syngas, we can produce fuels and chemicals – and so that’s what we did. Together with Frontline CEO Jerod Smeenk, we co-invented what we now call TarFreeGas®, a unique and scalable technology that nobody else has. We also became more involved in the downstream, first creating an integrated pilot plant for the production of renewable methanol as an input for biodiesel.”

With the decision taken to pivot towards renewable natural gas, Frontline quickly revamped its pilot plant from methanol to methane synthesis. “That, ultimately, is the basis of the SJR project: through syngas re-methanation, we’re creating a fungible, transportable biofuel. Right from the start, we were successfully making methane,” TJ reflects. “Technologically, we had no problems. From a business perspective, the yields were exceptionally high, with a conversion efficiency of about 60 percent. It’s now been about three and a half years since we started developing the project, and we’ve built a lot of momentum. We did an initial private placement memorandum, and last October we announced our equity funding deal, which will provide all the capital cash equity that we need for the project.”

In its delivery of SJR, Frontline is supported by investments of $165m from Cresta Fund Management and Silverpeak Energy Partners – a commitment that speaks to the project’s immense potential. “California is the largest market for compressed gas as transportation fuel in the US,” TJ notes. “Natural gas has a carbon intensity of about 68 grams of CO2 equivalent per megajoule as a transportation fuel. If you’re able to come in lower, then you’ll be eligible for carbon credits under the California Low Carbon Fuel Standard. That in turn creates value for the project.”

It’s not all about economics, however. The location of the project, within California’s San Joaquin Valley, is of vital importance. “The input for the SJR plant is the agricultural waste found throughout the valley,” TJ indicates. “A lot of the crops grown in the local area, including almonds, pistachios, walnuts, and citrus, have an economic life of somewhere between 20-to-30 years. Once that period expires, the orchards are replaced with more productive trees, creating a large mass of leftover wood. This region, owing to its dry climate, has a longstanding bioenergy industry founded on the incineration of that wood for electricity, although that’s declined with the advance of solar and wind energy.

“Several alternatives have been tried, but gasification is perhaps the best,” he continues. “In SJR, we’ll input the feedstocks into our gasification process to produce syngas, which we’ll then upgrade to the quality required to synthesize methane. Because the byproducts of that process include CO2 and water, we then added a carbon sequestration element. In all, that gives us a pretty carbon-negative profile, at about a 200 percent reduction relative to fossil fuels.”

This isn’t the only way in which the SJR project is setting new standards with regard to efficiency. “Another push within our engineering process design is to eliminate the consumption of water,” TJ notes. He then asks, “Is that possible? As it turns out, yes. Because we’re in a desert location, there’s very little water. We’re not going to put up a cooling tower, nor are we going to use a well to evaporate all the water, because it’s needed for agriculture. Instead, the gasification process produces water, as does methanation, as a result of the oxygen and hydrogen components within the biomass. 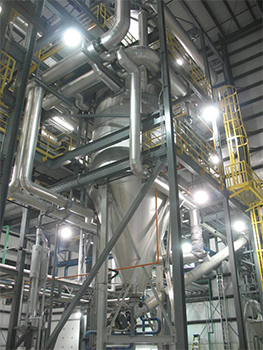 “In terms of what we do with that the water, we could clean it up and sell it, and some does go back into internal consumption,” he goes on. “However, there’s greater value to be had by mixing it with ammonia – another coproduct of gasification – to produce a green fertilizer, which we then sell as a 40 percent aqueous solution. Similarly, water also has application as a de-dusting agent for our biochar coproduct, which is created from the heating of biomass material in limited oxygen at a high temperature. By adding water to that, it helps turn it into a product with uses across soil enrichment and water treatment.”

Beyond its work on SJR, Frontline is exploring further avenues for innovation. “We’re involved in a couple projects in western parts of the U.S. and Canada,” TJ confirms. “The objective of one of these projects is to make renewable aviation fuel from forest residues, utilizing our technology on the front end to produce the syngas. Another project that is similar in kind to SJR, albeit at a reduced scale, will produce renewable natural gas from forest and mill residues.”

This year is set to be a busy one for Frontline, as project engineering for SJR gets underway. Nevertheless, it’s not the company’s only focus. “We’re replacing our current pilot plant with another at ten times the scale, and we’re currently ironing out the kinks,” TJ reveals. “We’re also licensing our technologies to several other biofuels projects, actively participating in the project engineering work, with the expectation of winning further contracts in the years to come. It’s a wide-open field in terms of biomass, with a lot of the market available to us.

“Although our focus remains developing projects in the US, we are open to partnering with a company in Europe to license our technology overseas,” he concludes. “Likewise, we’re interested in expanding into gasification for municipal solid waste. It’s a real challenge technically, but one that we’ve managed to meet. The market is very promising, and it’s been a lot of fun so far. We know that we have something the world needs, and we’re excited to demonstrate that further.”