The seeds of the technique lay in the 1990s with a challenge set by the Norwegian Petroleum Safety Authority (PSA) to the country’s industry to devise permanent P&A solutions that could potentially remain secure forever. Until that time the only material used in this process was cement, but old abandoned wells were already beginning to show signs of unsafe pressure build up. A group of well plugging veterans took up the challenge.

Tom Friestad, managing director of SWP, discusses the idea behind the Sandaband solution: “Some distinguished veterans from the industry decided to take on the challenge from the PSA. The phenomenon of downhole sand production was well known, as it may cause a prolific high pressure well to become completely plugged, causing costly work-overs to unblock. It was also known that, in order for a sand plug to be gas tight, it needed to have a wide particle size distribution as opposed to a highly permeable gravel pack with very uniform grain sizes. The challenge was then to develop a method for producing a quartz-based, non-consolidating, non-segregating material in industrial quantities at low cost that could be placed in a well using an industry-standard pump. The end result was Sandaband, its name derived from ‘SAND for ABANDonment’.”

Project manager Vidar Rygg explains its potential applications: “Sandaband was originally developed for permanent P&A but it soon became clear that the fact it does not set up makes it ideal also for temporary abandonment due to its easy removal. Because it does not shrink, fracture, or degrade, it is also excellent for use as an isolation material behind casing. Something worth mentioning is that Sandaband needs a floor to rest on, so for this behind-casing application it must be used in combination with cement and/or an external casing packer (ECP) to prevent it falling out when the well is drilled further. If Sandaband has not been used preventively behind casing during well construction it can instead be used correctively to remedy sustained casing pressure at a later stage. Finally, it is also a very good lost circulation material (LCM) for curing losses during drilling.”

SWP grew up as a company dedicated to operating and marketing the patented Sandaband technique, and is the exclusive provider of this material. As a new alternative with no precedent, SWP has faced challenges in bringing it to the market. Its belief that Sandaband is faster, cheaper, better, safer, and greener than existing alternatives, however, has been an endless source of motivation in convincing potential end users throughout the North Sea region. The company qualifies this claim through a series of key points. 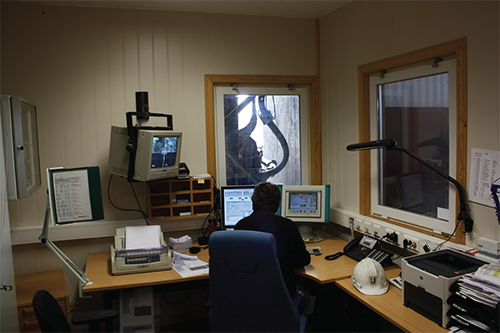 Sandaband is faster and cheaper because it can be placed and pressure tested immediately, rather than taking up to 48 hours to cure like cement, and when used for temporary P&A can be removed significantly faster too. In some instances the time saved pays for the whole operation. It is safer because it is a simple and robust mechanical process that does not involve any chemical reactions downhole, eliminating the risk of premature setting. And even if the placement should not be successful it can still easily be removed and replaced. The lack of any harmful chemicals also makes it a very green option. Another safety and efficiency aspect is that it arrives at the site pre-mixed and ready to pump. Finally, it stands out as an obvious choice because it meets all requirements of a permanent plugging material as laid out in UK oil and gas guidelines and the Norsok-010.

These advantageous characteristics have been recognised by quite a few players in the industry. Vidar highlights several deployments of Sandaband: “Our major task the last year has been for a large operator in Norway. Here we place Sandaband as a balanced plug in old shut-in wells. We pump it down tubing and up A-annulus. These operations take place on a platform without a drilling rig, and the task is simply to secure the wells temporarily until they can be permanently abandoned with a rig at a later stage. In 2009 we performed a permanent P&A of an exploration well in the Norwegian sector. This job was described in detail in an SPE paper, which was later selected for peer-review and publication in the SPE Journal Drilling and Completion (133446-PA).

Operations manager Ingvar Grannes adds: “We have also carried out operations on several wells in the UK in the last couple of years. There are many wells in the North Sea where there is pressure at the wellhead yet no wireline access. In order to repair these wells it is necessary to kill them first so you can nipple down the tree and place a drilling BOP on the well. Here we simply bullhead Sandaband into the well, displacing with brine or seawater to kill the well. We talk to clients all the time from across the world, and if we had more capacity we could do a lot more work but for now we want to grow the company at a controlled pace.”

Despite the challenge faced in bringing this new technology to the market, Sandaband Well Plugging has succeeded in making its first steps techniqueinto the industry. The company went through a partial re-launch in 2007 because, having succeeded in developing an ideal plugging solution, it also needed to have ownership in all the aspects involved; from marketing and planning, through logistics, execution and post-job follow up. The owners invested in industrial-scale mixing facilities and custom-built Sandaband tanks and also developed a close co-operation with third party equipment rental partners such as Module Solutions Systems, which has assisted in customising accurate pump configurations for its purpose. With a comprehensive, flexible solution available and the number of wells needing to be plugged only increasing; the future looks bright for Sandaband Well Plugging.

“We see tremendous growth opportunities for the company,” Tom states. “However, our business is also somewhat contrary to the rest of the industry. When the oil price is high there is a high incentive for postponing well abandonment because even a low production rate is profitable. On the other hand, there is a limit to how long a sub-standard well can be kept on production. The industry has had a tendency to suspend wells for a long time without doing a proper P&A. Authorities now increase the pressure on operations to spend the resources needed for planning and execution of P&A. There are also many exciting opportunities in the market for Phase I P&A of subsea wells. We want SWP to be the preferred provider of these services, based on a superior product and an excellent HSEQ performance. Once the product gains more acceptance it will be necessary to invest significantly more in equipment and people to meet the demand.”