Back to Profile Gallery > SandBox Logistics 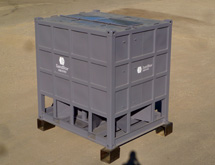 The development of the metal shipping container in 1956 revolutionized the shipping industry and defined the legacy of its inventor, Malcom McLean. Prior to McLean’s innovation, goods were loaded and unloaded individually in bags, boxes, crates or barrels as opposed to the more efficient method most frequently practiced today.

Josh Oren, founder and CEO of Houston-based SandBox Logistics, feels his company can do for frac sand storage and transportation what McLean did for general cargo: Make the shipping process faster and more efficient.

Oren’s company in 2011 developed the SandBox, an 8-foot by 10-foot metal crate capable of holding up to 46,500 pounds of frac sand. The box is at the core of a transportation process meant to eliminate many of the existing logistics challenges. It also helps with what the company refers to as “the three Ds:” dust, demurrage and degradation.

The SandBox is easily transported to the well site and unloaded by a forklift in less than five minutes. Once at the well site, up to 2 million pounds of material can be stored in roughly a 40-foot by 40-foot footprint. The SandBox process effectively eliminates the need for traditional sand mover equipment and actually saves pad space.

Regardless of what issues might be delaying the job at the well-site, SandBox delivery trucks can always make the delivery. This completely eliminates any detention charges at the well. Once the boxes are delivered they are placed on a cradle which conveys the sand into the blender. As boxes are emptied, they are easily replaced with full boxes.

“We wanted to create a true end-to-end solution where you could load a vessel at the mine and take it all the way through the chain to the wellhead,” Oren says. “Today, sand gets loaded into a rail hopper, brought into a region, placed into silos or just sits in rail cars, or dumped on the floor of a warehouse where loaders pick it up. It’s a laborious, time-consuming process that we wanted to eliminate while creating the lowest-cost solution we could think of.”

The company designed a SandBox railcar, which can hold four boxes and be loaded at the sand mine. The car operates exactly like a traditional hopper car and is filled through the top hatch of each SandBox. However, once the rail cars reach the destination, the boxes are simply picked off and stacked up. Rail cars can be off-loaded in a matter of minutes and returned back to origin. Nearly any rail siding can be turned into a transload terminal which allows services companies to get the material closer to the frac crew and reduce ground transportation costs. All in all, Oren believes that as much as $35 to $50 per ton can be saved in overall logistics costs depending on the region.

In addition to the SandBox itself, SandBox Logistics also developed support vehicles to assist in the transportation process. The SandBox cradle allows sand to naturally fall to the conveyor belt and is arguably the cleanest delivery process to the blender that is currently available. The SandBox process eliminates sand from being blown pneumatically, which is the biggest contributor to the silica dust problem. This dust, if inhaled over long periods of time, could be a health hazard. “Dust inhalation has been identified by OSHA as the top safety issue on a frac job,” Oren adds. “By not blowing the sand, we are eliminating that dust. That’s a pretty big deal to us, and one of the more meaningful and compelling reasons we had to begin to evaluate and test this system.”

Industry Demand
Oren became familiar with the “three Ds” and other inefficiencies related to the standard method of frac sand transportation and storage as the owner of PSI Frac Logistics, a logistics and transportation company that delivers ceramic and natural proppants to well site locations. Demurrage in particular is a common challenge for the company. “We saw what they deal with every day, so we started to think about how to solve those problems and create something valuable to our customers so we could eliminate the detention issue, and that was the genesis of SandBox Logistics,” he says.

After more than two years of developing, engineering and patenting its creation, SandBox Logistics formally introduced it to the marketplace in 2013. The company has signed contracts with and is building equipment for several oil and gas production companies working near its base in Houston. “The economics and health and safety aspects are compelling enough to where companies are engaging and putting this equipment out in the field to see how it works,” Oren says.

Although oil and gas producers actively engaged in fracking activities are SandBox Logistics’ target customers, the company is also seeing demand from frac sand suppliers looking for an alternative – and mobile – storage method. “There’s a large capital commitment to set up silos in a particular region, and in the oil and gas industries you don’t know when the activity may change or where customers may move to,” he adds. “Sand suppliers are viewing the SandBox as an inexpensive mobile and scalable solution that eliminates the need for silos, allowing them to move their business where they need – rather than engage in a large infrastructure project – at less than 80 percent the cost of silos.

“SandBox enables proppant suppliers to create a flexible ‘store-front’ for their product without having to make bets on a specific region,” Oren notes. “Even the smallest players in the proppant market can mobilize and implement a low cost, effective logistics solution.”