Back to Profile Gallery > SeaBird Exploration

“I think it is fair to say that when the company last featured within European Oil and Gas magazine, some two years ago, it was feeling the effects of the ongoing financial crisis, much the same way that almost every other business was at the time,” states Dag Reynolds, chief executive officer of SeaBird Exploration.

“In the time since the company has managed to shake off the effects, returning to a point where business levels are performing reasonably well.”

With approximately 578 employees as of December 2011, of which 486 are crew members with the other 92 based onshore, SeaBird Group’s management structure is designed to support its core business goals. These goals are to provide its clients with cost-effective seismic data acquisition solutions, promote efficient and safe seismic and marine operations, and facilitate effective communications among its stakeholders. Furthermore, the group is committed to streamlining logistic relations among its worldwide offices located in Cyprus, Norway, Dubai, Houston and Singapore.

Today the company is coming off of a detailed restructuring process that saw it enter into a share and purchase agreement with Fugro Norway. Under this agreement Fugro acquired SeaBird Technologies and Seabed Navigation Company Limited, which together collectively held all of the company’s rights and assets related to its ocean bottom node (OBN) business. This $125 million transaction was formally completed in December 2011.

“In truth, the OBN business was probably too immature for a company with a balance sheet like that of SeaBird Exploration,” Dag continues. “Such operations can involve extremely expensive undertakings and when they go well they can be highly rewarding. However, the other side of the coin is that it can be a very hostile market segment to be involved in when things don’t go so well. So the decision to sell this side of the business was a strategic move taken when it was decided that the OBN market hadn’t matured to the level the company would have hoped.” 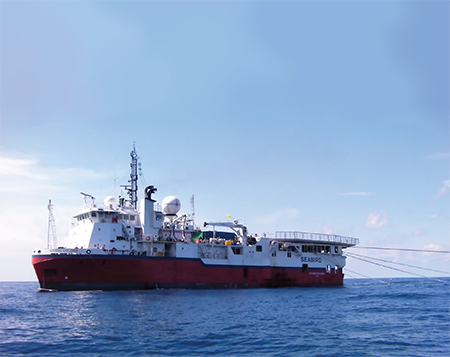 “At the same time as this restructuring, the company has found that the 2D seismic market has grown into what is now one of the central business segments for SeaBird Exploration, arguably even more so that the 3D seismic side of the industry,” highlights business development director, Kjell Mangeroy. “SeaBird Exploration is very much the market leader when it comes to 2D seismic operations, supported by the fact that it is one of a very select few companies to have achieved HSE approval from the vast majority of the leading players in the industry. What this means is that the company is extremely well positioned to follow its clients to areas of the globe that are showing particularly strong signs of growth, for instance the Barents Sea and off the coast of Brazil, both of which are regions that the company is actively targeting.”

South America, and Brazil in particular, has been playing host to a number of recent developments achieved by the company. In March 2012 it was announced that SeaBird Exploration had been awarded a $3 million, 2D seismic contract in Colombia. Its vessel the Harrier Explorer, which will, upon completion of the Colombia survey, commence its long-term charter in the second quarter of 2012 for Fugro, will carry this contract out. One month after, the company also announced that it has received an extension from Spectrum for a separate contract in Brazil, itself boasting a value of approximately $8 million.

The restructuring of the company allowed it to shift more attention to areas of the business that perhaps previously did not receive the attention that they could have: “In many ways the evolution of SeaBird Exploration has allowed it to expand into what were more niche fields for it before, for instance shallow water 3D seismic activities,” Dag says. “What we have done in recent months is charter the company’s Voyager Explorer vessel, a dual propulsion, shallow water capacity vessel, to several interested clients. So this is just one area of business that the company can definitely foresee itself expanding more into as time goes by.”

With both well-established oil and gas regions, such as those around the Arctic region, as well as parts of the world that remain relatively unexplored, the East of Africa being one, playing host to a great deal of interest from companies requiring seismic survey services, there is an understandable need for SeaBird Exploration to be preparing for its future: “Where the company’s focus lies at this moment is on improving its margins, while at the same time maximising its fleet capacity,” Dag highlights. “The best way for the company to achieve its targets are of course to continue to expand into niche areas like shallow water seismic, while doing everything within its power to maintain its rightful position as the industry leader in 2D seismic operations.”