SeaBird Exploration may find 2010 to have success written all over as it has already been awarded numerous 2D contracts.

Continuing a successful series of projects in Australia that began late October 2009, the Aquila Explorer entered a contract with the State of Victoria through the Department of Primary Industries for the acquisition of approximately 7400 km 2D marine seismic data within the Southern Flanks of the Offshore Gippsland Basin in the southeast Australia, covering the 2009 released Greenhouse Gas Storage blocks (Gipps-01 to Gipps-03). Having commenced on 21st February, the project is scheduled to be completed within two months. The vessel will then return to South East Asia where she has been awarded contracts to undertake approximately 4000 km of 2D acquisition over two areas in the Song Hong Basin.

The combined value of both projects is estimated to be in the range of about $6 million and provides the vessel with employment for the next four months. Commenting on these exciting projects, CEO of SeaBird Exploration, Tim Isden stated: “SeaBird is delighted to be associated with the Victorian Government for this project and looks forward to further consolidating its position as a leading provider of seismic services in the region.” SeaBird’s Munin Explorer has also been awarded a contract in the North Sea as a source vessel commencing 1st June for the duration of two months, with the client option to extend for a further three to four months. The initial award period will generate approximately $4.1 million, with client paying fuel cost. 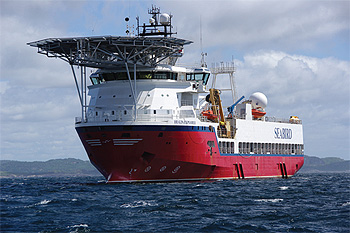 In addition, the Osprey Explorer is contracted to work from completion of her current survey at the end of February in direct continuation until approximately the end of March in east India. This additional survey is approximately 3000 km and will generate in the region of $1.7 million, with client paying fuel cost. A Letter of Award has also been received for a 5000 km survey in east Africa that will commence mid to late April. The vessel to perform this contract will generate in the region of $4.7 million inclusive of fuel cost.

Continuing to pave its way forward in the industry, SeaBird Exploration first made its mark in 1996 and is today a global provider of marine 2D and 3D seismic data, solutions for seabed acquisition of 4C/4D multimode seismic, and associated products and services to the oil and gas industry. SeaBird and its subsidiaries are dedicated to providing an extensive portfolio of multidisciplinary geophysical services to the oil and gas exploration and production communities. The company strategically integrates professional expertise with the latest acquisition technologies to provide the best solutions for its worldwide clients.

SeaBird specialises in high quality operations within the high end of the source vessels fleet, providing a versatile solution for its clients’ needs, from traditional undershoot operations to the latest Wide Azimuth acquisition techniques. Also providing 2D seismic acquisitions, the company’s 2D vessels are equipped with proven and reliable 24-bit streamer and acquisition systems (Sercel SEAL), along with industry standard navigation (Concept Systems Spectra) and QC packages (FGPS SeisPos Landmar ProMAX). A recent expansion in its streamer capacity now means long offset acquisition with vessels capable of towing up to 12 km streamers. 2D/3D shallow water acquisition completes the range of services it offers. M/V Geo Mariner is SeaBird’s specialist shallow water vessel and its unique design allows it to operate in areas that would usually be considered suitable only for Transition Zone (TZ) operations. The vessel is equipped, as the rest of the fleet, with Bolt gun arrays, Sercel SEAL streamer systems and Concept Systems navigation.

Working in such challenging environments, SeaBird believes that HSSEQ (health, safety, security, environment and quality) is of paramount importance and even has a highly qualified team of HSSEQ Group members to back its commitment. In order to achieve a streamlined operation throughout its fleet, the corporate HSSEQ Group focuses on longer term and more strategic activities. The company puts its success down to its focus on HSSEQ combined with its efficient collection of high quality seismic data.

Despite the gloom of the global economic crisis that overpowered the success of many companies, SeaBird Exploration seems to have experienced a rather successful 2009, based on all vessels being back in operation during Q4 2009, a higher utilisation of the 2D vessels during Q1 2010 and a better than expected performance of the Ocean Bottom Node (OBN) operation. SeaBird’s OBNs record seismic data reliably and safely with unprecedented flexibly over cabled array systems, which opens up many areas that have historically been closed to systems – such as permanently installed ocean bottom cable arrays. Independent, autonomous OBNs have overcome the challenges associated with application of permanent arrays minimising the high cost of installation, particularly in developed fields.

Combining this capability with the increase in the number of awarded 2D contracts towards the end of the year, it comes as no surprise to learn that SeaBird is expecting a substantial improvement of the EBITDA (Earnings before Interest, Tax, Depreciation and Amortisation) in Q1 2010 compared to the last quarters of 2009.