Back to Profile Gallery > Sertco 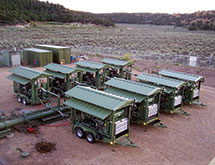 Sertco may have changed a great deal since it was founded in April 1979, but the same governing principles that led the company then remain in place today. Sertco has more than 30 years of manufacturing experience and 15 years in the natural gas compression business, allowing it to design solutions for wellhead compression needs.

“This is our 35th anniversary, and we have been known for our quality and machining capabilities since day one,” Vice President of Operations Joe Harrington says.

In the 1980s, Sertco expanded its aerospace manufacturing processes into the world of high-performance motorcycle racing. As the turn of the century neared, Sertco formed an energy division in 1997. The energy industry soon became Sertco’s main focus, and it now produces high-quality compressors that are widely used in gas production.

“Our units are designed to keep the gas flowing and to prevent water or other liquids from killing the wells,” Harrington says. “We have our own proprietary technology, and we machine everything here in Oklahoma.”

Sertco was able to take the technology it developed to serve the aerospace and high-performance sectors and put it to use in the creation of a reciprocating natural gas compressor. The idea was to devise a less-expensive solution that was easier to maintain, allowing small- and medium-sized natural gas producers to see significant savings.

“Our cost and horsepower advantages, along with a quality build, are what set us apart,” Harrington says.

Over the years, the company has developed a number of compressor designs. It says its most popular design is based on the rotating assembly from a Chevrolet 350 5.7-liter automobile motor, packaged in a split case horizontally opposed cylinder arrangement. Sertco compressor packages are designed to help unload downhole fluids, increasing gas production and well longevity.

Since the company entered the natural gas compressor sector, it has produced more than 1,000 units that have logged millions of hours of continuous service. The company goes to market through a number of distributors, and it has units operating in the United States, Mexico, South America, Europe, Russia and Indonesia. It continues to explore other markets around the world, such as Australia, in search of opportunities.

“About five years ago, we built machine No. 500, we built No. 1,000 in 2012,” Harrington says. “That illustrates the kind of growth we’ve experienced. We’ve established distributor relationships

Investing in the Future
Sertco has also continued to invest in its facilities. Between 2005 and 2010, the company added 30,000 square feet of fabrication and assembly space, allowing it to quadruple production rates. It has four separate manufacturing facilities that include a nine-machine CNC shop; weld and engine building; a six-line, 32-station production building; and a blast and paint booth and test loop area. Investments in a new load dock, automated paint and blast booths, and a robotic welder are also in the works.

“We started out in one 15,000-square-foot building where we did aerospace and high-performance motorcycle work, and that is where we started making our natural gas compressors,” Harrington says. “To help us expand, we utilized some Department of Commerce funds, spending about $1 million of our own money along with $2.5 million in public funds to improve our facilities and equipment.”

As the company continues to evolve, it will need to keep up with demand and ensure that it has a qualified workforce. It must adapt to changing lead-times for components, which Harrington says have doubled in the last year. Sertco also expects its work – which has been 80 percent international and 20 percent domestic in recent years – to shift back to a more even split.

Given that the natural gas industry remains fairly active, Sertco feels it is in good position to ramp up quickly. The layouts of its facilities have been designed to handle the ebb and flow of the industry, and Harrington says the company can cut back or speed up based on market conditions. Whatever direction the industry takes, Sertco is confident it has taken the steps it needs to succeed.

“We have grown through word of mouth, and we have excellent partners,” Harrington says. “We can do business with majors or mom and pops, [and] we can meet all of the guidelines and requirements that govern this kind of equipment.”