Back to Profile Gallery > Sevan Marine AS

Founded in 2001, Norway based company Sevan Marine AS originally was set up for designing, building, owning and operating floating units for production (FPSOs) and drilling (MODUs).

“Following a restructuring of the company in 2011 Teekay acquired our three FPSO units and furthermore invested in the company itself, while Sevan Drilling acquired our four drilling units,” begins chief business development officer Fredrik Major. “We then changed our focus from being set up to build, own and operate FPSO units to become a company able to concentrate on harnessing and further developing our unique technology – the cylindrically shaped hull.”

Sevan Marine’s cylindrical hull is designed to meet the oil and gas industry’s need for versatility, flexibility and robust design. The cylindrical hull design developed by Sevan Marine has been utilised in FPSO design and mobile offshore drilling units (MODU) and has been successfully deployed around the world on Sevan Marine built units now under operation by Teekay with the FPSO Piranema Spirit in Brazil and the FPSO Hummingbird Spirit and FPSO Voyager Spirit in the North Sea. The design pioneered by Sevan Marine incorporates a circular hull with symmetry of design, high capacity for oil storage and deck loads, excellent motion characteristics, no turret or swivel, the capacity for FPSO units to carry a large number of risers and high safety standards. 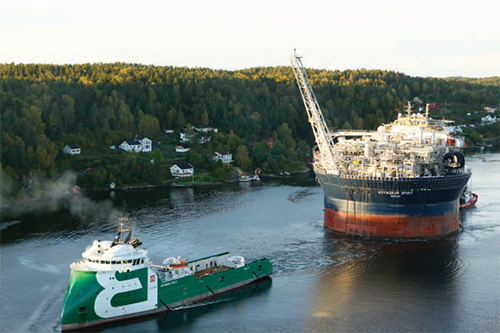 Elaborating on the advantages of the Sevan Marine design over traditional FPSO construction, Fredrik says: “A ship-shaped floating unit will require a complicated and cost driving turret/swivel system allowing it to rotate around its mooring system. Such a system also implies that all connections to the floating unit have to run through a swivel, which becomes very complex and involves dynamic seals for high-pressure well-streams as well as slip-rings for power and signal transfer. A cylindrically shaped floater removes this requirement and therefore represents a significant simplification, resulting in reduced capital expenditure and operational cost as well as increased reliability.”

The cylindrical hull concept continues to gain acceptance throughout the oil and gas industry with the design currently in use in the construction of two floating accommodation units (FAU) based on the cylindrical hull by COSCO in China. “All of our units as of today are built in China, except for the Goliat FPSO which is being built in the HHI yard in Ulsan South Korea,” says Fredrik. “We have developed a very good working relationship with the COSCO Nantong and Oidong yards for the construction of our FPSO, MODU and accommodation units.”

The accommodation units under construction at COSCO are being built by Logitel Offshore, which has the sole right to produce accommodation units using the Sevan Marine design. As of July 2014 it was confirmed that Teekay had entered into a tri-party agreement with Sevan Marine and the owners of Logitel, Cefront Technology AS, to purchase 100 per cent of the controlling interest in Logitel. Further to this, during August 2014 it was announced that Teekay had exercised the first of six options to construct further FAUs at the COSCO shipyards. The new unit will be constructed at COSCO Shipyard, Nantong, for delivery in Q3 2016, thus expanding the current building programme to three units. Commenting on the decision by Teekay to exercise the build option, Sevan Marine CEO Carl Lieungh says: “Sevan’s cylindrical hull design is perceived to have several competitive advantages relative to our competitors such as; lower cost, higher deck load capacity, better stability and more storage space. Teekay’s exercise of the first FAU option will also have a positive effect on our earnings.”

As Sevan Marine continues to explore its embarkation into a new era of technological development it has continued to invest in complementary technologies that suit its current product portfolio and will expand its current service offering. During February 2014 Sevan Marine acquired the technology rights of TORP LNG AS and its affiliates, giving the company ownership of the proprietary HiLoad offshore LNG loading system. Sevan Marine has developed a floating LNG terminal (FLNG) based on its innovated cylindrical hull shape to provide an extremely efficient offshore LNG loading solution. Because of its low temperature of 163 deg. C the offshore loading of LNG is a complex and potentially dangerous operation and one for which operators are constantly on the lookout for an effective solution. Sevan Marine is confident that it now has the answer. “The floater market is challenging with large and complex projects,“ Fredrik concludes. “The main hurdle when introducing a completely new concept is convincing the first clients. With 12 projects established, we have this difficult stage behind us and are facing increased interest in our concept – even from the most conservative oil companies.”