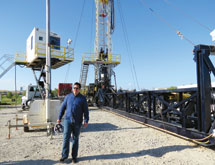 Boom towns are great places for those making money, but local residents whose towns and services are swollen past capacity by an influx of workers may not share in the enthusiasm for development. That was what Shale Exploration LLC wanted to avoid when president and principal F. Sam Tallis and his partner, Sid Greehey, moved into Scobey, Mont., and the company established offices there and in Billings, Mont.

“We formed Shale Exploration about three years ago to be more of a local arm of Greehey Co. and Greehey and Associates,” Tallis explains. “Basically, there’s a lot of companies that come into Montana and say, ‘We have big checkbooks – we can come in and want this and that.’ People are standoffish about it. So we formed this entity and became part of the social fabric and part of the community, and it’s highly successful. It was a great experience, so it worked out well.”

Shale Exploration LLC was formed in early 2011 by a consortium of industry veterans to acquire a substantial leasehold in a promising area of the Bakken Shale in the Williston Basin. Tallis and his partner Greehey, CEO and principal of Shale Exploration LLC, believed that the U.S. Geological Survey had underestimated the potential of the Bakken-Three Forks Jayhawk prospect for oil production.

Working with Apache
Shale Exploration has obtained more than 400,000 acres in Daniels, Sheridan and Roosevelt counties for oil and gas drilling and has secured Apache Corp. of Houston as its operator. “We signed an agreement where we basically sell them the leaseholds and we retain some royalties in that relationship,” Tallis explains.

“We do what we are good at, putting together large prospects, regardless of the competition of other leasing companies, who typically can be very cut-throat,” he continues. “As we have an established track record leasing against the largest companies, ‘the big boys’ in the resource plays, we put together large prospects with a team that I would put against any group. So far, my faith in them has never been wrong. From Eagle Ford Shale to the Bakken to the Barnett Shale, our team seems to get it done, bigger, better and, most importantly, they always do it with integrity.

“For Apache, we continue leasing and putting together the prospects for development, and that can consist of drill sites, helping them with that, making sure that all the land is packaged legally and assisting them with their operations,” Tallis continues.

Shale Exploration and Apache hold more fee leaseholds and Montana leaseholds in Daniels County than any other company in the county. The company has filed four drilling permits with the state. Shale Exploration is working with Apache drilling a preproduction well on its Jayhawk prospect.

“These aren’t mere test wells – these will be fully stimulated hydraulic fracturing,” Tallis points out. “The reason we chose them as an operator is they are known for being the first in New York and Pennsylvania. They have an ‘A’ team that puts them in phenomenal opportunities, and they’re leading the pack. They’re very good about determining information like that. They’re drilling four to five wells in different areas.

“There’s always an element of uncertainty,” he concedes. “We could drill four wells and have modest results and the fifth be a gusher. There’s really no telling because it’s exploration. A company like Apache is not going to spend several hundreds of millions of dollars and be completely wrong. They didn’t get to be big by making those types of mistakes.”

Sheridan Success
Oil production has been successful around the prospects that Shale Exploration has assembled. “There’s production one county over in Sheridan County,” Tallis points out. “Daniels has never been developed with the present technology that’s out there. Daniels has produced oil – nothing substantial – but they didn’t have the horizontal drilling, the fracturing and the latest technology that they have right now.”

Tallis has confidence in Apache’s reputation and the data the company has collected. “We’re going to hit oil – it’s just how much we’re going to hit,” Tallis emphasizes. “Apache was in this area several years ago without the latest technology. In my opinion, they had data no one else had or maybe it is just insight – the core sampling. We know there’s oil there, so it’s just, ‘Are we going to have the type of Bakken wells that have people saying that this is going to be the biggest oil reserve in U.S. history, or are we going to have wells that are substantial but are average for the basin?’ That’s the big question.”

Apache already is making a substantial commitment to the project. “Apache has invested in infrastructure development for their equipment and contractors,” Tallis stresses. “They’ve brought in full-fledged, high-tech security. They’re very big on making sure nothing can happen to their drilling equipment. They’re bringing all these people in.

“In my opinion, Apache is not going to invest in this infrastructure if they don’t have a substantial degree of certainty that this is going to be a huge success,” Tallis maintains. “All that is in process. It’s not, ‘Let’s wait and see.’ They’re getting that all in order, from the purchase of real estate to acquiring houses and setting up a satellite headquarters.”

Infrastructure Interest
Shale Exploration’s 400,000 acres is a substantial holding. “That’s a tremendous amount to go in there and develop and explore,” Tallis points out. Initially, drill sites of 640 or 1,280 square acres will have a single well drilled in them.

“Depending on the success, they could do four to eight wells,” he explains. “We have areas that we believe to be better than other areas. We think they’re all substantial, but they are going to test their system. Is this really Tier 1 or 2? After they find out its estimate, then they’ll develop hot and heavy within those tiers.”

Fortunately, Shale Exploration has been able to overcome the shortage of drilling equipment by working with Apache. “There’s a rig shortage for Bakken wells, but Apache has such clout and deep pockets, they get put at the top of the list for people seeking rigs,” Tallis points out. “So they have the resources to develop it.”

Politics and Pipelines
Apache’s resources include contracting with services to extract the oil and using railroads for shipping. Unlike Texas – where wells can be tied into existing pipelines or oil can be trucked to pipelines – rural Montana does not have such infrastructure in place.

“From what I have been told, they are going to have to truck it and then rail it, and that’s expensive, but the project costs have been maximized to where they’re very efficient,” Tallis declares. “The entry cost is very low, so regardless of the cyclical nature of oil – as long as oil doesn’t go to $30 to $40 a barrel – it’s still a tremendous value because the entry cost is so low.”

He maintains that the success of the oil wells in Montana will result in the eventual construction of pipelines. “Pipelines depend on politics,” Tallis concedes. “We probably would have had access to some pipelines or spurs going to pipelines but for what I believe to be politics. I say within 18 to 24 months, multiple pipelines will be in place.”

The oil could be transported to Billings, which has three refineries and is located approximately five hours from Shale Exploration’s holdings. “If the Keystone pipeline gets implemented, as I believe it will – it’s a no-brainer for our country’s needs – that could very well decide where that oil goes,” Tallis remarks. Additional refineries are located in Louisiana.

Image-conscious Company
The hands-on touch that Tallis and Greehey took to developing Shale Exploration – moving into the community and getting to know the major players in the area – underlines the company’s approach. Two larger oil companies offered them substantially more money for their project, Tallis maintains.

“It was a no-brainer for Sid and I because it’s not just about money,” Tallis declares. “Sid and I have lived here for 14 to 15 months. We want to make it a better place, not a worse place, because there’s oil here.” It was with that attitude that they selected Apache.

“They’re so savvy and they’ve done it so many times,” Tallis points out. “Apache is one of the most image-conscious companies that I’ve ever worked with, and that means a lot to me. Because we didn’t want anything tarnished that we built in making our friends and neighbors in Montana.”

Deep Pockets
Why did Shale Exploration sell its project to another company? “When we put the project together, we anticipated doing about 100,000 to 200,000 acres,” Tallis recalls. “We thought it would be very fast and easy. We would have no trouble whatsoever acquiring rigs, and we would develop it ourselves. Once we found what we knew was there, we’d bring in some big guys like Apache and never look back, because the top companies are the best companies to develop.”

Once the project approached 300,000 acres, Tallis and Greehey realized they needed an expert company that had the capacity and resources to develop it.

“We realized the cost was through the roof,” he continues. “We weren’t going to be able to develop it as fast as we wanted, and we could not get service companies. We couldn’t get everything we needed. It was just going to be an uphill battle. So our development at best was going to be patchwork. We needed deep pockets and expertise.

Planned During Bust
Shale Exploration’s current project was conceptualized in 2008 as another company Greehey and Tallis owns was selling its natural gas assets and the natural gas price started dropping. “We saw it coming, so we started looking more and more into oil and getting rid of our natural gas assets, and it worked out pretty well,” Tallis remembers. “We got out at a good time, and we so we had good reserves, and that led us into oil.”

Tallis says it is difficult now to get into an oil deal. He dates the start of the boom to around 2010. “When we got here about one-and-a-half years ago, acreage was just $25 to $50 acre, and now it’s gone up drastically,” Tallis calculates. A complicating factor is the recent success of wheat and grain farming in Montana.

“Most of Montana is dry, but they’re doing great,” Tallis reports. “They’ve had plentiful rainfall in the last three years. Farmers have made money in the last few years. That was an obstacle to leasing. We would bring somebody who had a lot of land a half-million-dollar check for their lease of their land, and they would balk at it. When you see the combines cost $800,000 and they have three of them, it’s not your mom-and-pop operation. These are very sophisticated farmers, very savvy business men and women.”

“Sid is a visionary, and he spent a lot of time trying to figure out how to beat the learning curve as well as the rush in this industry,” Tallis maintains. “There is always somebody out there who has more money and more resources. So what we try to do is work hard and be there before they get there.” EMI