Back to Profile Gallery > SMIT Subsea

The SMIT group has a proud tradition of serving the maritime sector for almost 170 years.

The company has earned an excellent reputation by combining expertise and experience with high-quality materials and equipment in the nearly 50 locations around the world where it is active. SMIT aims to provide its worldwide services in the main to shipping companies, producers in the oil and LNG industries, (offshore) construction companies, insurers, governments and shipyards. SMIT maintains the highest standards in respect of safety, health, the protection of the environment and quality. It is also a member of Royal Boskalis Westminster nv.

SMIT Subsea operates on a global basis from five strategic locations: its headquarters in Rotterdam and regional offices in Cape Town, Dubai, Singapore and recently in Perth, Australia.

A part of the SMIT Transport and Heavy Lift division and headquartered in Rotterdam, SMIT Subsea has parlayed its experience to become a provider of a wide range of diving services. Amongst the many services the company provides, SMIT Subsea Europe offers high quality subsea inspection, repair and maintenance (IRM) solutions by means of surface demand and saturation diving systems and ROV services. The company also provides a series of associated services, from project management to subsea engineering support, and also operates its own modular diving systems and ROVs, which are deployed from Diving Support Vessels (DSVs) or directly from the platforms.

All of the equipment operated by SMIT Subsea, such as its DSVs, which range from 75 to 100 metres in length, have been designed to perfectly suit its home market of the Southern and Central North Sea. This area of activity includes the waters off the coasts of the UK, Netherlands and Denmark, with the company having also undertaken projects in the Irish Sea in the past.

A highlight is the period of time between March and October, which provides the backdrop for what the industry considers to be the ‘high-season’ of activity in the North Sea regarding installation and IRM works, and this year has seen a considerable improvement of activities compared to that of 2010.

SMIT Subsea was awarded a contract in April to undertake dome installation work in the K-18 field, on the Dutch Continental shelf. This contract, on behalf of Wintershall, has been undertaken in two phases. The first phase involved the installation of two domes, each weighing around 100 tonnes, to protect the wells on the seabed. SMIT’s floating sheerlegs ‘Taklift 7’ was mobilised to position these protective structures. The second phase of the work, which is currently being executed, requires an air diving campaign to install pipeline spools with the DP3 DSV ‘EDT Protea’, which is on a long term charter with EDT Offshore. SMIT Subsea provides the dive and ROV systems, divers and dive management on the vessel. 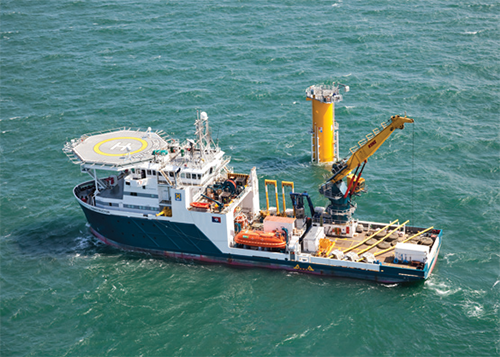 Further projects this year with the Protea include the annual IRM campaigns for ConocoPhillips in the UK sector and various inspection and removal scopes on the offshore assets of Maersk Oil in the Danish sector of the North Sea.
SMIT Subsea is also active in the renewable market in the North Sea. Since May the DP2 DSV ‘Constructor’ has been providing diving and installation support for Visser & Smit Marine Contracting for the Statoil Sheringham Shoal wind farm project offshore Teesside UK.

Due to the complex and vital nature of the work undertaken by SMIT Subsea Europe, the company has worked tirelessly over the years to build up a reputation for developing highly innovative and safe working methods to carry out the most complicated of tasks. One example of SMIT Subsea using its in-depth knowledge and experience of offshore operations is the work the company is carrying out this summer on behalf of Maersk Oil in the Danish Sector of the North Sea. The main scope of SMIT Subsea is to remove several submerged boat landing structures by means of a series of subsea diamond wire cuts and lifting operations conducted by a team of divers, supported by ROVs and a rope access team on the platform.

The very nature of this work involves the DSV being stationed on DP in the vicinity of the platform structure, while the diving team perform their tasks in and around the splash zone of the platform structure. To ensure the safety of the divers is guaranteed at all time, SMIT Subsea has incorporated the use of extended umbilical systems into the project. By bringing in these systems, the divers are provided with an increased excursion length from the DSV, one that allows them to dive into areas of the structure that would be otherwise unreachable in a safe way. Specifically for the Maersk Oil project, they have also developed their own dedicated man riding boatlift for a secondary smaller diving craft SMIT Stour, modelled and fitted in such a way that it can be mounted to the stern of the mothership, freeing up vital deck space on the DSV.

Being a part of a global organisation that is active in 50 countries brings with it a raft of benefits, one being a worldwide network of local offices, operational bases and built-in contacts. This network is further supported by the synergy that exists between SMIT’s various divisions and its parent company, Royal Boskalis Westminster. SMIT has been investing significantly in its fleet of vessels over the last five years and today owns more than 450 floating assets. Together with approximately 700 presently owned by Boskalis this gives SMIT, and its subsidiaries like SMIT Subsea, the ability to offer its services to clients on a truly global basis.

In recent months SMIT Subsea has carried out a series of customer surveys with its main clients as a way of establishing the company’s strategy for the next three years. The results of these surveys showed that what these clients valued most about SMIT Subsea was its ability to provide reliable, high quality work, whilst always maintaining the finest of standards in health and safety.

It is core qualities like these that the company will continue to promote as it looks to capitalise on the changing business environment of the North Sea. Over the next five years there is expected to be a stable demand for maintenance and repair services in the North Sea, particularly as the older structures in the region reach the end of their lifespan. As decommissioning work increases so too will the reliance on remote operations in response to the stricter regulations being adopted by the major oil and gas operators. As the industry evolves by designing new subsea structures and pipelines, which will be operated and maintained increasingly by ROVs, so too will SMIT Subsea by investing in more advanced workclass ROVs, thereby strengthening its position within its home market.