Stretching from Algeria to Italy, the Trans-Mediterranean Pipeline has been transporting natural gas between the two countries since 1983. The energy link has helped to create a strong working relationship between the two states, and in 2018, the bond was made stronger. As part of the organisation’s mission to establish itself among the top five oil companies in the world, Sonatrach, Algeria’s state-owned oil company, acquired the Augusta Refinery in Sicily from its previous owner, Esso-ExxonMobil.

Alongside the purchase of the new facility, Sonatrach added to its vast collection of over 150 national and 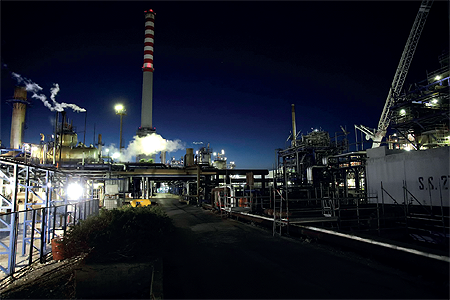 international subsidiaries by launching Sonatrach Raffineria Italiana (SRI) to manage the site. SRI’s CEO and Augusta Refinery Manager Rosario Pistorio discusses the impact of the acquisition in more detail: “Sonatrach is an integrated oil and gas company, and a major player in the sector. It supplies around ten per cent of the European market and close to 30 per cent of the market in Italy. Not only is it the largest comcompany in Africa based on revenue, but it is the fifth largest supplier of LPG in the world and the sixth largest global supplier of LNG and natural gas.

“The acquisition of the Augusta Refinery is a significant step in the company’s journey,” he adds. “It means that, in addition to remaining the main exporter of the Middle East and North Africa (MENA) area in Italy, it is also a candidate to become the first importer in the coming years too.”

Future potential
In 2019, shortly after the Augusta Refinery came under Sonatrach’s control, the company invested in a major renovation of the site. Taking over a month to complete, and requiring the skills of around 4000 contractors, the turnaround helped to secure the future potential of the facility and opened up new opportunities for development.

“It has left us with an even more reliable refinery, equipped with the most modern control devices, which will continue to ensure environmental sustainability over time,” Rosario states. “We will always be committed to the continuous improvement of our plants and products, and the refurbishment will help us look at new measures for energy efficiency.”

Primarily focused on the production of high-quality fuels and lubricants, the Augusta facility is a crude oil refinery with a capacity of 206kbd and an output of close to 9.3 million tonnes a year. One of the largest refineries in the Mediterranean, the tank farm onsite contains around 275 tanks, covering an area of approximately three million cubic metres. Located on the east coast of Sicily – an island which is home to around half of Italy’s oil refining comcapacity – the Augusta Refinery utilises a network of fuel depots to manage the storage, handling, and distribution of its fuel products. Terminals in Palermo, Naples and Augusta have an overall storage capacity of 140,000 cubic metres and are ideally located for export across Europe and the rest of the world. 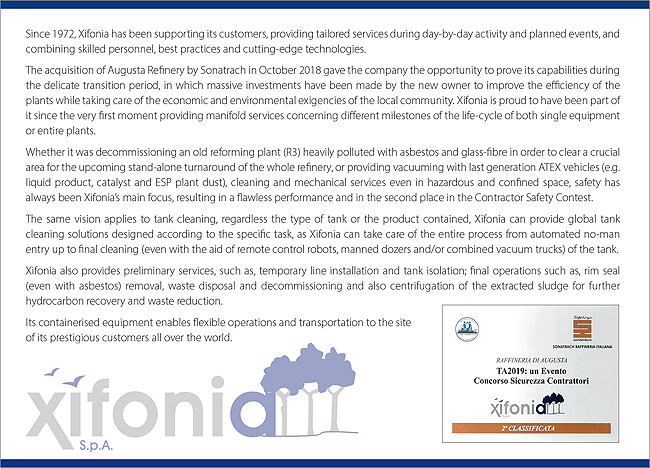 Further optimisation
Currently, the Augusta Refinery serves ten per cent of the Italian national demand and is able to produce one million tonnes of bitumen per year. However, these impressive numbers do not mean that SRI is getting complacent. Rosario explains that the company is already looking at ways to further optimise its processes and output.

“We are only a year removed from the facility’s biggest turnaround ever, which involved 3.5 million hours of work. It is early for us to update our comprehensive five-year investment plan, especially with the recent uncertainties in the oil market, but investments for the improvement of our profitability, and the increased competitiveness of our assets, are already in the screening process.”

Focus on safety
Sonatrach celebrates its 70th anniversary in 2020 and a large factor behind the organisation’s longevity is its strong company culture and the firm’s ability to instil this culture in its subsidiaries. From the beginning, SRI has embraced Sonatrach’s core values and they play a key role in the management and operation of the Augusta Refinery.

“The cornerstone of our company is its culture,” Rosario proclaims. “Integrity, ethics, safety, environmental awareness, reliability, and social responsibility are the pillars on which we have been founded. Facts, not opinions, determine our reputation, as well as an adaptability to market changes, a competitive mindset, and trust in our employees – our most valuable asset.”

Driven by a number of projects and initiatives overseen by Rosario, safety and sustainability have become two areas in which the Augusta Refinery thrives.

“The entire population of our facility, including contractors, is committed to safety,” he declares. “Aside from our safety management programme and comprehensive risk assessments, we are now moving our focus to more behavioural aspects of health and safety. Our Loss Prevention System (LPS) is a tool designed to prevent personal injuries, occupational illnesses, and other losses by using behaviour-based processes and proven management techniques.”

Safety, of course, has fallen under increased scrutiny of late as the world deals with the outbreak of Covid-19. Like all businesses, SRI has been forced to introduce new measures to mitigate the risk of Coronavirus to its workforce at the Augusta Refinery. Rosario is understandably proud to announce that, through a combination of clear communication and swift, decisive action in response to the pandemic, the facility has maintained full operational activity, despite less than 30 per cent of its staff being present onsite. 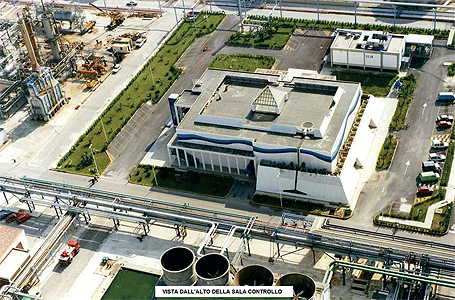 “The culture built up over decades of industriousness at the Augusta Refinery has really benefited us,” Rosario notes. “We analysed the risk and we put in place all the precautions to maintain the safe operation of our site, including working in line with all advice from the authorities. We also signed a joint protocol between the company and trade union representatives, with the involvement of local stakeholders and in synergy with our nation’s industrial association.”

Environmental programme
With respect to sustainability, Sonatrach and its subsidiaries aim to minimise the impact of their activities on the environment, in accordance with national and international regulatory and normative requirements. For example, Sonatrach is committed to reducing atmospheric pollution generated by flaring operations, and this is reflected in the company’s dedication to the World Bank initiative for the reduction of routine gas flaring by 2030.

“For over a decade now, the company has implemented the best available technologies in its mission to protect the environment,” Rosario insists. “We recently reviewed our refinery’s activities using the Sustainability Index (SI) platform, which allowed us to analyse sustainability using five criteria: transparency, management level, reliability, improvement, and completeness. The data obtained was processed by an algorithm that generated a sustainability assessment, indicating what actions we must take to optimise our commitment to the cause.”

Community engagement
The seriousness with which SRI approaches sustainability is closely linked to the importance Sonatrach places on the comcompany’s corporate social responsibility. “Trying to play a larger role in the territory we operate in is one of the founding elements of our business,” Rosario maintains. “In addition to supporting cultural events, we organise and participate in various educational and social initiatives.”

“Over the past few years, we have also donated a computer science laboratory to a local school,” the CEO adds, “and we regularly arrange projects for the integration of disabled people. We think it is important to encourage and support local associations by providing books, videos, and other materials, and we hope that these may be of use for the entire community.

“The focal point of the refinery’s presence here has always been our relationship with the surrounding area and the communities living here; considering their needs is a fundamental part of what we do. We have always carried out our operations with the aim of safeguarding the local environment and improving quality of life for people of this region.”

This has never been more evident than in the recent actions of SRI staff who chose to donate part of their April salary to voluntary associations engaged in assisting the population during the Covid-19 emergency. OIL&GAS energy-oil-gas.comThe company has decided to double the resulting sum.

As well as the donation, the Augusta Refinery has been supporting local institutions and healthcare facilities throughout the pandemic by providing masks, disposable coveralls and latex gloves. Employees at the facility also contributed to the purchase of equipment for a hospital in Syracuse and the Covid-19 centre in Augusta.

“We are firmly convinced that the social responsibility of a company in these moments must translate into concrete actions for the territory,” he says. “The donation initiative was designed and carried out by our employees, to whom I extend my heartfelt gratitude.”

Beneficial network
Though travel bans and coronavirus lockdowns mean that the global oil market is currently suffering from oversupply and a lack of demand, Sonatrach continues to work towards the company’s growth and development. In the recent past the firm signed a memorandum of understanding (MoU) with ExxonMobil and Chevron, which focuses on exploration and development opportunities in Algeria and is likely to benefit the company and the country at large.

Rosario recognises that, for SRI, close ties with its parent organisation are vital to ensure that the company prospers and that the Augusta Refinery continues to operate as one of the leading facilities in Europe. Since the early 1970’s, Sonatrach has been establishing itself worldwide and the company now has a recognisable presence in more than ten countries, including comTunisia, Mauritania, Mozambique, Angola, Nigeria, Italy, Spain, Portugal, England, the Netherlands and Peru. Success across such a large network has been built on clear leadership, collaboration, and teamwork.

“In a dynamic and changing market, we have been able to keep the refinery running, opening up our customer portfolio and guiding us to new commercial opportunities,” Rosario states. “Looking forward, one clear objective for the future is to ensure strong synergy with the Algerian team. Developing our ability to interact and co-operate with Algeria, and with all Sonatrach refineries, will enable us to create a network where we can share experiences and develop further business opportunities.”