Back to Profile Gallery > South African Oil and Gas Alliance

In the interest of promoting and developing the Western Cape in South Africa, the South African Oil and Gas Alliance (SAOGA) was formed six years ago as an umbrella body for the country’s supply hub and fabrication centres.

To best take advantage of geographic proximity, the Alliance primarily markets itself to the offshore oil and gas market in West Africa and operates as part of the framework set by the New Partnership for African Development (NEPAD). This unlocks African value, economically and geographically, by facilitating opportunities and leveraging resource capabilities and capacities across the regions.

Essentially, the public sector acts as an enabler to SAOGA, while the private sector fulfils the role of implementer. Its unwavering objective is to be the preferred supply hub and fabrication centre for supplies and services to the exploration and production, repairs and maintenance and new build project markets for the offshore oil and gas community in West Africa.

European Oil & Gas Magazine spoke to SAOGA’s executivedirector, Warwick Blyth, to look at the reasons behind its formation and how the association performs its remit. “Set up in 2004, South African Oil & Gas Alliance is a non-profit organisation,” he outlines. “It started due to industrial development work in the provincial governmentof the Western Cape in South Africa, which identified an interesting cluster of companies that served the upstream oil and gas market in the region. “These firms were providing all sorts of services into that industry, most visibly around our harbour undertaking marine repair, upgrading and maintenance for rigs and various vessels. Clearly it was important for development to be encouraged, so SAOGA was formed to do just that. Today, the Alliance has two concerns – industry association and economic development. About 160 private member companies are part of the Alliance, predominantly suppliers to the oil and gas industry.”

Warwick sheds light on the types of firms that utilise the Alliance’s services, harnessing the potential therein for business development: “I think about the oil as gas industry as having three tiers of players. Tier one players areoperators like Shell and Chevron, national oil companies and exploration firms; tier twos are main contractors and consultants; and tier threes are product and service suppliers to tier twos and, to a lesser extent, tier ones. SAOGA is comprised of players from tiers two and three, meaning that we represent suppliers to the industry, rather than operators, although we are reasonably involved with operators who are actively involved in South Africa.” 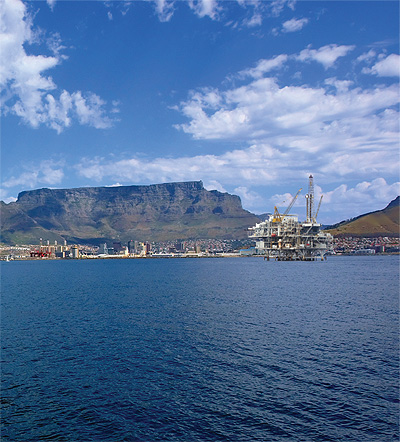 Speaking in further detail about SAOGA members’ expertise, Warwick reveals that with regards to supply chain categories in the oil and gas industry, its members are fairly concentrated in facilities in one way or another. “Primarily, the Alliance is comprised of contractors, consulting and engineering firms, and people who fabricate items such as process equipment for topsides, machinery, equipment, valves and pumps,” he explains. “The second area of activity is marine and subsea, which encompasses subsea manifold and riser designers and manufacturers, as well as subsea inspection services. We have a large marine based cluster that undertakes rig maintenance, repair, servicing and upgrade.

“The last area of focus is support and services, which involves a whole slue of companies. One of the major clusters within that concentrates on warehousing and logistics, so a huge amount of logistics for the West Africa oil industry comes through South Africa – Cape Town in particular. This category incorporates recruitment and training services, as well as medicine, finance, accounting, legal, sea and air transport, catering and facilities management. These are more general services to the oil and gas sector and many of these member companies form a significant part of operations along the west coast.”

In terms of the work SAOGA undertakes, there are three broad areas that Warwick defines as programme areas for activity. The organisation’s value proposition to members is based broadly on offering services in those three areas and, as its pool of companies is diverse, there are different demands for services depending on which part of the member base a firm belongs to.

“The first area of activity is industry capability development, which aims to enhance the industry’s effectiveness and capability, and this includes public policy and advocacy work,” he notes. “It rests on public infrastructure being in good working order, so we work with the relevant government entities and state owned enterprises to put the agenda on the table in respect of investment and operational management issues. Members benefit from us being their mouthpiece in the public arena.”

He continues: “Related to capability development, we conduct and co-ordinate studies for the oil and gas sector, looking at potential new infrastructure investments, such as tax regime changes. We’re also involved in a supplier quality and capability development programme, which is about improving supply chains and making the industry more competitive. To this end, we work towards skills development by directly funding training, and harmonising global training standards with local standards. This means training providers can offer one qualification that meets every requirement.

“The third area is marketing and business promotion, so we run networking events for our companies, co-ordinate trade missions and attend international exhibitions. We’re even starting to match companies directly to procurement managers.” SAOGA’s role is all the more important at present because South Africa is emerging as a potentially significant oil and gas producer, owing to the fact there are still large unexplored areas of the region, including far offshore areas. In terms of geology, there’s a possibility of large amounts of oil and substantial gas discoveries.

Commenting on current events in the market, Warwick observes: “What’s happening in upstream South Africa is one of the more interesting developments; we’ve just had the latest licensing round and there’s been interest in offshore deepwater in the northwest coast of South Africa. There’s already been one commercial discovery of gas in the area but Shell has just taken out a deepwater licence there, so we’re excited about them coming back into the South African picture.

“With offshore, BHP is about to finalise its licence for a block in that area as well, so a fair amount of activity is about to start up in the offshore upstream region in South Africa with some significant players. Also, in the latest licensing round there was far more interest than anticipated in the onshore blocks, regarding shale gas in South Africa. Furthermore, the national oil company Petro SA is pushing ahead with a huge refinery project, which is likely to be built in this part of the world in a few years. I think those three big developments will significantly influence our supplier base and the industry overall in South Africa.”

Indeed, it seems the industry is interestingly poised. Overall, from the upstream point of view, production in South Africa has been fairly minor but the picture on the northwest coast is very exciting. “There’s a real possibility of discoveries that will create critical mass for us in the form of a significant new gas infrastructure and production on the northwest of the country, and even oil as well,” Warwick confirms.

“I’ve seen some of the Southern African oil producing countries, particularly Angola, become fairly congested and companies locating more personnel in South Africa itself, using South Africa as a base to reach some of the oil producing countries in West Africa. It’s much easier to operate here and it’s an attractive base in terms of retaining staff and being close to the action. There’s a big industrial infrastructure around here as well. These are exciting times for the South African oil and gas industry, with real opportunities opening up.”

Looking to the future, SAOGA will build on its existing success to further support and propel its member companies, whilst keeping the channels of communication open between itself and the public sector. “Our competitive supplier development programme should be a significant move forward and I want to deepen links with procurement managers in the region,” Warwick shares. “We’ve already launched an online oil and gas directory of companies in this country, www.oilandgassa.com, and skills development and training will also become a priority over the next year.

“Government support and involvement in the industry is paramount in order to ensure that infrastructure, incentives, fiscal and tax regimes, and bilateral agreements with South African countries are in place. We’ll build on African Union initiatives, allowing South African companies full access to the region’s opportunities.”