“The company was established in June 2007 and very quickly got involved with another group called Oceanteam ASA, which took a 60 per cent share holding in the business,” explains Graeme Kidd, managing director of Specialist Subsea Services (S3).

“Out of this merger came Oceanteam Subsea Services, which was an organisation taking part in all service aspects of the water column, specifically intervention activities through the use of ROVs, survey techniques and providing the necessary ships and equipment where required.

“Following a reasonable year in 2008, Oceanteam ran into financial difficulties in 2009 making life very difficult for S3. Subsequently it took nearly eight months for the company to buy itself back through an MBO, thus managing to keep the business alive. While it did not grow in 2009, it did not go to the wall either, thanks to a huge amount of support from its creditors. Finding a new investor in December 2009 allowed S3 to honour its debts and prepare for 2010, which was inevitably a consolidation year. At the end of 2010 S3 was acquired by a company called Reef Subsea AS, which became majority shareholder and ever since has seen a pattern of continuous growth.”

Explaining the range of services S3 offers, Graeme highlights that it is much more than just a specialist in surveys and ROV activities: “S3 undertakes inshore survey work, which is obviously a different type of technique to the one used offshore in deeper water. The company carries out pure survey activities using instruments that are deployed into the water column to capture data from the seabed and structures. Survey sensors can also be placed onto ROVs for stand-alone projects where different equipment can be put onto the ROV making it an intervention, jetting or cutting apparatus. In this field S3 covers the whole spectrum including the design and manufacture of certain specialised tooling that goes onto the ROV.”

Everything S3 does within the oil and gas industry is conducted on an international scale: “S3 has operated all over the world, predominantly in the North Sea, but also in the Mediterranean, in West Africa and in the Middle East. The company bids to every corner of the globe and is quite happy to do work anywhere in the world. It also has a presence in the renewals market, which is predominantly based around the UK coastline and towards Germany, in the Baltic region,” Graeme states. 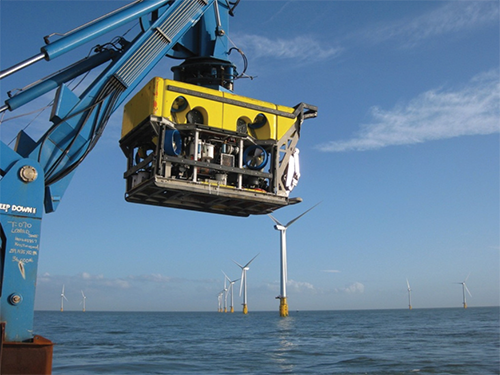 As S3 works to meet growing customer demand it is moving ahead with the acquisitions of both new, specialist equipment and smaller companies that can assist in taking operations forward: “At present S3 owns two XLS vehicles which are extremely good and very capable, but do have slightly dated control systems. So what the company has done to alleviate this is purchase two new XLX systems that feature modern control equipment and have better diagnostics software. This takes the company’s assets up to four working systems increasing its capability to service more clients.”

In January 2011 S3 acquired Caledonian Geotech Ltd, a small inshore company operating out of Dundee: “This purchase completes the company’s survey chain allowing S3 to operate from zero metres right down to 3000 metres. Previously the company had to hire in specialist contractors to deal with operations between zero and ten metres in depth, but S3 can now handle the whole process,” Graeme enthuses before stressing that these developments are allowing the company to look further afield at new geographical markets to work in. “S3 sees Brazil as a region full of opportunities and the company is constantly looking at the potential to expand into Africa, namely in Angola, Namibia, Ghana and the Congo.

“The Caspian Sea and the Middle East also provide potential growth opportunities and the company will continue to target high specification, ultra-deep water, drill rig support contracts which will take it around the world. Into the future S3 will go wherever the drill rig market goes and this will increasingly go wherever there is deep water for example in the Gulf of Mexico and West Africa.”

In spite of being established for less than five years, and undergoing a hugely destabilising 2009, S3 has risen from the ashes to become more successful than ever and as Graeme states this comes as a result of the company’s major strengths: “Not least its personnel, but also S3 is viewed by its cliental as being very flexible in terms of speed of reaction, the ability to be very cost effective and to react to situations as they arise. It means the company is not as rigid as some of the big guys in regards to the client having to just accept the status quo. Add to that an executive team who have all been in the oil and gas industry for 25 to 30 years and come with a proven track record and who, more importantly, possess a huge amount of knowledge.”

As the business diversifies and ventures into new areas, Graeme has a clear vision of where he would like to see S3 in five years time: “I think S3 will grow to be a full-blown turn key operator focused on life of field opportunities fully supporting offshore construction projects right through all the maintenance activities of all sorts of subsea structures. At the same time we will keep a watching brief on the company’s renewable services. It is not an easy market, but I hope that within five years time we are a major supporter of cable lay within the renewable industry, not only in Europe but hopefully also in the United States.”