Back to Profile Gallery > Spectrum ASA

Part of the process

The complex field of Multi-Client services and seismic data processing is well known to Spectrum ASA, with the company having provided such services since its inception in 1986.

A truly global business, the Spectrum Group is present all over the world with offices in prime locations such as London, Houston, Oslo, Singapore, Beijing and the recently opened Brazil site. Additionally, Spectrum is present in Perth and Jakarta through its subsidiary Spectrum ASB, formed in 2010 following the acquisition of Australian Seismic Brokers (ASB) Pty, as well as Cairo as part of joint venture Spectrum-Geopex. In 2008, Spectrum underwent a major rebrand and modernisation as a Multi-Client services specialist; this in turn saw the business begin trading on the Oslo stock exchange for the first time.

Over the years Spectrum has built up a large portfolio of clients, as demonstrated in 2010 when the company worked alongside more than 30 different oil companies. This included an array of super-majors, national and smaller independent oil companies. Spectrum is fast becoming a world leader in the supply of regional seismic data in key areas of frontier exploration.

At the heart of Spectrum’s offering is the Multi-Client data library. The company is proud of its global 2D & 3D Multi-Client library, which comprises over 500,000 km of 2D seismic data and 35,000 sq.km of 3D data. The value of the library is continually enhanced through the targeted reprocessing of this data, as wellas newly acquired data. As opposed to owning its own vessels, Spectrum ASA commission’s seismic vessels to carry out data acquisition in identified strategic locations. This data is then processed through Spectrum’s internal seismic imaging group, which totals approximately 120 people worldwide, to produce a final product. Spectrum ASA’s Multi-Client concept then sees this product sold to varying oil companies, which gain a license to use the data for their own evaluation of the basin in question.

“In the very early phases of exploration, oil companies typically look to carry out a basin evaluation in order to screen the potential of these locations,” explains Rune Eng, president and CEO of Spectrum ASA. “As part of these activities, we offer both the acquisition and processing of regional 2D seismic data, which tends to give an indication of the prospectivity within a sedimentary basin. We also provide more detailed 3D seismic acquisition and processing, which is something most oil companies look to acquire before establishing a well.” 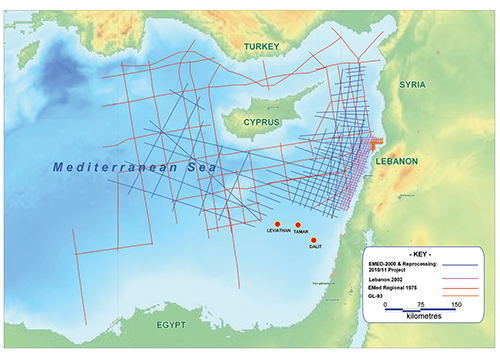 This kind of activity is currently being seen in Greenland, Brazil, Australia and Africa, as oil companies look to explore new areas following the reduced volumes in established areas like the North Sea and the Gulf of Mexico. Earlier this year, in partnership with leading industry experts, Spectrum launched a unique package of products aimed at the East Mediterranean. This is designed to enhance exploration knowledge in a region that has seen recent gas discoveries – Dalit, Tamar, and Leviathan. Notably, Spectrum’s Multi-Client seismic data covered all three of these discoveries. “Following the gas discoveries made by Noble, we see the East Mediterranean as an area of significant interest for several oil companies,” explains Rune. “This is a large area comprising Cyprus, Syria, Lebanon, Israel and Egypt, and oil companies require a regional understanding of how the basin looks and how the petroleum system works.”

Spectrum ASA’s core capabilities include modern seismic imaging techniques in 2D and 3D to solve a variety of seismic processing challenges. In terms of delivering this extensive portfolio, Rune highlights the key strengths of the business: “Our staff make up 80 per cent of our assets. As such we are very focused on securing experienced and efficient individuals. This is particularly important given that the processing and reprocessing of 2D seismic data is a people intensive process, as opposed to 3D processing which is more computer-based. Our Multi-Client products are dependent on having good quality data, in terms of both processing and seismic acquisition, so we utilise the best technology available in the industry.”

With part of Spectrum ASA’s business model based on strict cost control, earlier this year the business signed an agreement with Seabird, another Norwegian-based seismic company. In return for purchasing services from Seabird over the next three years at a cost of 23 million USD, Spectrum ASA has sold the operating rights of its single vessel to Seabird. This has proved to be a strategic development for both companies, which sees Spectrum ASA now positioned as a purely Multi-Client business.

Spectrum’s Multi-Client operations are regionally focused with close co-operation with local oil companies and local government. In this respect, Spectrum ASA plans to continue to expand its commercial reach through establishing further satellite offices. Commenting upon the current conditions of this market, Rune says: “The Gulf of Mexico remains one of the world’s most exciting areas in terms of seismic activity, licensing rounds and drilling, and so we are keen to see new development happening in this area. We have an extensive library of data on the eastern Gulf of Mexico where we have identified substantial prospectivity for oil and gas discoveries.

Spectrum has ambitious growth plans to increase turnover in the near future, “Having began life as a privately owned company focused on seismic data processing, a lot of the culture and mentality within Spectrum is based on the processing and reprocessing of data. In terms of growing the business further, we are looking at the acquisition of new data in areas such as Brazil, the North Sea, Africa, and the Gulf of Mexico, as opposed to just reprocessing existing data. As we bring in the new data acquisition services, I expect to see our top line revenue increase over the next five years from 60 million USD today, to more than 200 million USD,” concludes Rune.