Since its purchase from Dansk Esso in 1986, Statoil Refining Denmark A/S hasoperated the Kalundborg refinery on behalf of the Statoil Group, along with a product terminal in the centre of Zealand. The oldest parts of the refinery date back to 1961, but it has gradually been developed and modernised over the years including an expansion in 1995, which broughtin the facility’s condensate distillation plant; this in turn enabled it to produce petrol with a lower content of the carcinogen benzene.

“Statoil Refining Denmark A/S is 100 per cent owned by Norwegian firm Statoil ASA and is located on the west-coast of Zealand, Denmark. The refinery has a capacity of 5.5 million tonnes per year and has been expanded several times and also been upgraded to produce high quality diesel and petrol. Moreover, the energy efficiency was improved, making Statoil Refining Denmark among the most energy efficient refineries. The crude processed at the refinery is mainly from the North Sea, however the Kalundborg refinery also acquires crudes from the Atlantic basin to optimise the feedstock supply,” begins Jofrid Klokkehaug, CEO of Statoil Refining Denmark A/S. The crude oils and condensates from the North Sea are delivered via ship, with more than 600 ships docking at the refinery’s pier every year. Connected via two pipelines, one gasoline and one gasoil, to its terminal at Hedehusene, near Copenhagen, the small yet flexible oil refinery’s products are also supplied to other markets in northwest Europe.

“More than 80 per cent of the products produced at the refinery are transportation fuels such as diesel and petrol,” confirms Jofrid. One reason behind this capability is the refinery’s ongoing commitment to investment, which thus enables it to introduce new products to the market. For example, built at a cost of DKK 400 million, the refinery’s Synflex facility came on-stream in 2002 and produces one million tonnes of sulphur-free diesel oil annually; this is otherwise defined as ten parts per million of sulphur, or 0.001 per cent. Statoil Refining Denmark also delivers petrol and diesel oil with less than 50 ppm (0.05 per cent) of sulphur.

Meanwhile, a more recent modification programme took place in 2008 in response to decreased throughput caused by the economic downturn. Because the refinery operates in an oversupplied market, the fuel reduction plant was put into operation in 2009 to ensure production remains maximised.

Continuing this trend for facility enhancement, Statoil Refining Denmark is currently investing in optimising its capacity and efficiency through enhanced maintenance as well as making its operations more environmentally friendly in line with updated EU regulations. Part of this investment involves upgrading and expanding on the storage tanks as well as improving corrosion protection and improving detections of oil and gas defects. Discussing these investments, Jofrid notes: “Statoil Refining Denmark is continuously investing in upgrading and 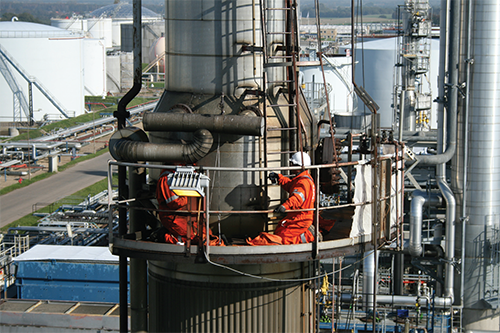 developing its facilities to ensure safe operation, to minimise emissions from the plant and to improve the quality of the products from the refinery. The focus for the near future is safe operations, increased efficiency and to optimise the utilisation of the plant by feedstock optimisation and production. Examples of investments are renovation and expansion of crude storage, more fire and gas detection in the process area and a new administration building.”

Behind every investment there is an aim to improve the refinery and enhance its competitive edge on the market. However, as a refinery operating in an area with stringent environmental standards with regards to emission, noise and product quality, these investments will also ensure Statoil Refining Denmark not only meets EU regulations now, but is also well prepared for future demands.

In addition to facility enhancements, as part of Statoil Group, the refinery naturally shares its parent company’s culture of safety and risk management and therefore strives to maintain these high standards throughout all operations. “The refinery aims at continuous improvement of its operations by cutting costs and increasing value creation,” states Jofrid. “We have three main goals: safe operations, efficient operations, and to be an attractive employer. Safe operations are our number one priority, and therefore we primarily invest in maintenance and reducing HSE risks.

“Although the everlasting challenge at the refinery is the fierce competition in the market due to too much refining capacity in Europe, we know we cannot do anything actively about the refining capacity, but we can maintain focus on continuously improving our own business in order to be as competitive as possible. We will do this without ever losing focus on the safe operations,” she continues.

During April and May 2016 with the refinery being shut down in order to conduct the largest shutdown for inspection and maintenance in the history of the refinery, it looks as thoughStatoil Refining Denmark’s trend for optimisation and improvements of operations is certain to continue. Moreover, these improvement projects have been expanded across all areas of the plant, with lean manufacturing and training being introduced to all employees, as Jofrid concludes: “The lean way of working is an ongoing process to improve efficiency in all work processes. The employees at Statoil Refining Denmark are eager to improve the way of working to increase the competiveness of the refinery.”