Back to Profile Gallery > Statoil Refining Denmark AS

Processing approximately 5.5 million tonnes of crude oil and condensate per year and with a tank capacity of some 800 million litres, the Kalundborg refinery was purchased by Statoil from Dansk Esso in 1986:

“Along with the coastal refinery, Statoil Refining Denmark also owns a product terminal located in the centre of Zealand,” explains Rasmus Wille, Statoil Refining Denmark’s refinery manager. “At its facilities the company refines crude oil products and then ships them out on boats or via trucks based at the terminal to its main markets, these being Denmark and Southern Sweden. This closeness to the local market allows the company to keep its freight costs low, making it an attractive option for prospective customers.”

The oldest parts of the refinery were first put into use in 1961, with the plant gradually developing in the five decades since. The facility’s condensate distillation plant was added in 1995 enabling it to receive large volumes of light crude. This made it possible for the plant to produce petrol with a lower content of benzene. Today the refinery is also able to deliver petrol and diesel with a sulphur content of just 0.001 per cent.

“One of the factors that sets Statoil Refining Denmark apart is that it prides itself on being a highly energy efficient refinery, very integrated and specialised,” Rasmus continues. “For example the refinery produces a very unique MK1 diesel for the Swedish market. This is a particularly specialist product thatis recognised as an environmentally friendly form of diesel, and Statoil Refining Denmark is one of only a handful of refineries capable of producing this grade.

“For example the refinery produces a very unique MK1 diesel for the Swedish market. This is a particularly specialist product that is recognised as an environmentally friendly form of diesel, and Statoil Refining Denmark is one of only a handful of refineries capable of producing this grade.

“Another strength of the company stems from it being a key part of the industrial symbiosis of Kalundborg. The mutually beneficial relationships Statoil Refining Denmark has built up with other companies working in the city has helped create a network that allows all parties to exchange utilities such as steam, heat and water, thus helping to keep operating costs down throughout the year.” 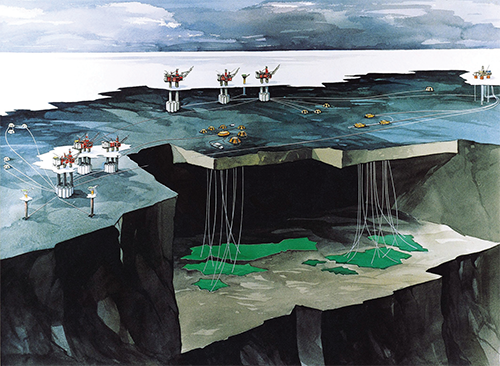 The last major modification programme undertaken at the refinery occurred in 2008 with the completion of a fuel reduction project: “Statoil Refining Denmark is a thermal cracking visbreaking facility, which means it produces a minor part of heavy fuel oil that is traditionally priced lower in comparison to diesel and gasoline. The work carried out in 2008 was to upgrade the facilities’ thermal cracking unit and this allowed the refinery to produce even more diesel out of its fuel pool. This development has allowed the company to further characterise itself as a diesel producing refinery and as the price of diesel continues to rise, and gasoline prices fall, it places the business in a strong position.”

Statoil is renowned for its heavy focus on health, safety and risk management and, as Rasmus highlights, this culture has passed down into every task carried out at the Kalundborg refinery: “Every employee of Statoil Refining Denmark knows that safety always comes first. The company has a very strong focus on ensuring complete compliance in its work processes and has made absolutely certain that all the necessary technical barriers are in place to manage risks accordingly. A lot of time and capital is spent on upholding the technical integrity of the plant and ensuring the highest standards are kept intact.”

2011 sees Statoil Refining Denmark celebrating two significant milestones, one being the 50th anniversary of its opening, while the other celebrates the 25th year of Statoil ownership. To mark the occasion the company will be holding an open house event at the refinery where business partners and Statoil executives will be present to reflect on the historic legacy of the facility. The refinery’s employees won’t be left out either, with a grand dinner scheduled to take place in Copenhagen.

While this year presents an opportunity to look back at all the company has achieved to date, Rasmus emphasises that it remains a priority for Statoil Refining Denmark to plan for the future: “At this moment in time Statoil as a whole is focused on two specific things, one being the optimising of the products it has in its portfolio and the other is maintaining its record of conducting safe, efficient operations. Within the next few years it is a personal hope of mine that Statoil Refining Denmark will be leading this initiative by becoming the industry leader in HSE.

“The company has a clear strategy of becoming a more flexible refinery and has worked diligently to widen its crude intake so that it can now process not only crude products from the North Sea, but also from the Middle East and Africa. Going forward, one area the refinery will look into is getting a foothold in the market of selling and producing biodiesel and biogasoline. With the market for fuel oil looking like it will become a much more difficult environment to do business, Statoil Refining Denmark will work hard to remain best placed to meet the demands of the industry.”