Operating as a wholly owned subsidiary of the Norwegian firm Statoil ASA, Statoil Refining Denmark A/S is Denmark’s key refinery company meeting over 80 per cent of the country’s gasoline and diesel requirements via its Kalundborg refinery operations. Since its purchase from Dansk Esso in 1986, Statoil Refining Denmark has continued to manage the Kalundborg refinery on behalf of the Statoil Group, along with a product terminal in the centre of Zealand and a terminal just outside the refinery in Kalundborg. While the oldest parts of the refinery date back to 1961, the site has been continuously developed and modernised and in 1995 for example, the refinery was expanded to include a new condensate distillation plant that enabled it to produce petrol with a lower content of the carcinogen benzene. Today Statoil Refining Denmark is amongst among one of the world’s most energy efficient refineries, with crude oils and condensates mainly from the North Sea are delivered via ship, with more than 600 ships docking at the refinery’s pier every year. The refinery is mainly supplying the local market. A part of the refined products are also supplied to other markets in northwest Europe. The refinery is connected via two pipelines, one gasoline and one gasoil, to its terminal at Hedehusene, near Copenhagen. Statoil Refining Denmark was 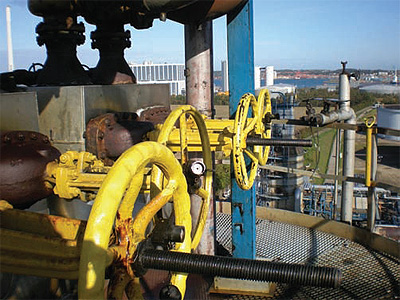 previously featured in Energy, Oil & Gas magazine in October 2015, during which time CEO, Jofrid Klokkehaug discussed the on-going development of the refinery. The development is covered in the strategy to deliver sustainable future for the refinery. Throughout the year the company made significant investment in optimising its capacity and efficiency through enhanced maintenance as well as making its operations more environmentally friendly in line with updated EU regulations. Part of this investment involves upgrading and expanding on the storage tanks as well as improving corrosion protection and improving detections of oil and gas defects. Over the years the company’s efforts to optimise its Kalundborg refinery have enabled Statoil Refining Denmark to achieve highly positive results, including a record year for 2015. “The refinery has a capacity of 5.5 million tonnes per year and has been expanded several times and also been upgraded to produce high quality diesel and petrol. Moreover, the energy efficiency was improved, making Statoil Refining Denmark among the most energy efficient refineries. As mentioned the crude processed at the refinery is mainly from the North Sea, however the Kalundborg refinery also acquires crudes from the Atlantic basin to optimise the feedstock supply,” explains Jofrid Klokkehaug, CEO of Statoil Refining Denmark A/S.

“2015 was a very good year for the refining industry in Europe and a very good year for Statoil Refining Denmark, so we had a very high level of income during that year – the best ever in fact. One of the main reasons for this is that there were some very good margins in the refining market and in addition we had record high regularity, meaning that we were able to run the refinery in an efficient way,” she continues. “This enabled us to achieve good optimisation of the feed stock and to capitalise on cost reduction, which all contributed to the company having a very good year throughout 2015.”

More than 80 per cent of the products produced at the refinery are transportation fuels such as diesel and petrol, with the refinery’s ongoing commitment to investment enabling Statoil Refining Denmark to introduce new products to the market. “As Denmark’s key refinery, Statoil Refining Denmark is able to meet 80 per cent of the country’s gasoline and diesel refining requirements. While the facility is traditionally a refinery for the local market within Denmark, we also have the key advantage of being close to the markets within Scandinavia with Sweden as our biggest export market,” Jofrid elaborates. “The refinery’s Synflex facility came on-stream in 2002 and produces one million tonnes of sulphur-free diesel oil annually; this is otherwise defined as ten parts per million of sulphur, or 0.001 per cent. Statoil Refining Denmark also delivers petrol and diesel oil with less than 50 ppm (0.05 per cent) of sulphur. When comes to feedstock we are keen to look beyond the North Sea as this market is relatively flexible and we are able to import a variety of crude components.”

Between April and May 2016 the Kalundborg refinery was closed down for the biggest inspection and maintenance programme in the history of the refinery, which resulted in further improvements to the efficiency of the facility and the installation of new components. The continued investment into plant equipment and optimisation represents a key strategy for Statoil Refining Denmark in navigating a competitive market. “The inspection and maintenance of the refinery was a significant undertaking that involved the inspection of nearly 1000 pieces of equipment, ranging from vessels and simple instruments to highly complicated refining machinery. It incorporated a wide range of activity such as the changing of catalyst material and during the operation we also introduced additional fire and gas detection systems,” Jofrid concludes. “There is currently significant over capacity in the refining sector within Europe and our focus is to continue to run the refinery efficiently, while ensuring that we optimise on the crude supply and increase regularity. We operate the refinery according to the lean methodology because we believe this is a very good tool to make the refinery even more efficient.”