These are extremely exciting times for Calgary based company Sterling Resources.

From its humble Canadian beginnings in 1979 as a small company trading under the name People’s Oil, Sterling Resources is today evolving from being a small exploration-focused team to a recognised exploration and production operator working to a full-cycle strategy. While the company continues to grow its exploration portfolio it has now embarked on a mission to add profitable development and production to its long list of achievements.

As Mike Azancot, president and chief executive officer of Sterling Resources highlights, the road up to this point has been long and winding: “Sterling really came to the fore in 2005, when it became involved in various licenses in the UK offshore sector. Around the same time the company acquired licenses in Romania where it discovered two significant gas fields, Breagh in the southern North Sea and another offshore field called Ana and Doina.

“The decision was made in 2009 to nurture these assets and take them through into the production phase, something that will begin in 2012 with the Breagh development. In the last year or so the company has been taking on new people, particularly those with more of a petroleum engineering background, however it is essential to point out that the core business of the company remains the same. Sterling has always been, and will remain, a smart and astute explorer that utilises its workforce of seasoned technicians and businessmen to the very best effect.”

With first production of gas due from the Breagh field by the middle of 2012, Sterling Resources is little more than a year away from hitting the most important turning point for any exploration company. However, as Mike continues, there are many other activities the company is involved in: “One of the biggest operated assets within the Sterling portfolio is the Cladham field, situated in the northern North Sea where the company operates a 40 per cent interest. This is a particularly big appraisal operation that the company is involved in where the aim is to commence oil production at some point in 2014.

“The other important area is located off the coast of Romania where, alongside Breagh, the company has a 65 per cent interest in the Ana and Doina development where first gas is also predicted to be achieved in 2014. Sterling also has a presence in the offshore sector of the Netherlands and possesses onshore assets in France that are currently in the process of being rejuvenated. Sterling as a company has always been open to taking on new opportunities and it utilises its knowledge and abilities as an operator to break into fresh markets when the chance presents itself. 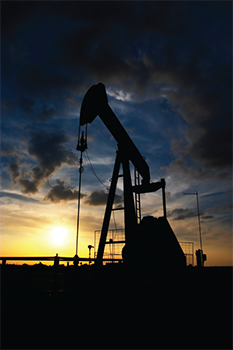 “While the possibility of moving further into Europe does often present itself, everyone involved in Sterling’s operations is aware that there is a lot of work already going on and that it is essential not to lose focus on the important business at hand. Although further growth through acquisitions is always something that could happen, it is not something that is necessary needed right now to achieve the company’s goals.”

To get to where it is today, Sterling Resources has understandably relied upon its expert technical ability, using it to identify good, quality opportunities and locate oil and gas: “The key to success begins with having a strong, technically gifted team that knows the geology and has a solid grasp of the basics. Another way of standing out is to approach all potential projects in a open-minded way. For example, the Breagh field was originally discovered by Mobil, however it was decided at the time that the site wasn’t economically viable due to insufficient production rates. Sterling proceeded to take over these assets, and by drilling the well in a different manner it was able to test it at a much higher rate and consequently the field is now in an advanced development stage,” says Mike.

“One other necessary skill to have is the ability to handle all finances correctly, particularly if the company in question is of a small size. Between 2008 and 2009 Sterling could very well have gone under,” Mike reveals. “That period of time was very, very challenging, yet the company weathered the storm and returned to the point where it could once again raise capital as investors recognised its quality of assets. In 2010, Sterling was able to raise $120 million in new equity, simply because it has proven time and again that it has the financial acumen and discipline to turn this kind of investment into success.”

In light of the turmoil of 2008 and 2009, it gives the employees of Sterling great confidence in the future that today’s market conditions are looking particularly buoyant: “Europe is a very good place to do business these days, particularly with the price of oil hovering around $100 a barrel and gas being nearly double the value here than it is in the US,” Mike explains. “Within the UK sector of the North Sea the company is having to assess the effects of the Chancellor’s supplementary corporation tax increase, but because of Sterling’s financial competencies these tax rises shouldn’t have any noticeable effect on the company until about 2016. So this obviously puts Sterling is a better position than some of the other companies currently operating around the UK.

“Though the company certainly looks a lot closer at its numbers before embarking on new work than it used to, the future does look very bright for Sterling. The environment the company is working in is strong and healthy and perfectly supports the quality of its assets and opportunities. Looking at Sterling’s portfolio it is very clear to see there is a great deal of upside potential.”