Operating from the strategically advantageous location of Etzel within Germany’s northern energy hub near Wilhelmshaven, STORAG ETZEL GmbH* represents a leading oil and gas storage business with a great deal of experience in constructing (solution-mining), operating and leasing caverns. The roots of the business date back to the global energy crises that occurred during the 1970’s, while today STORAG ETZEL manages 73 existing gas and oil storage caverns with a capacity of approximately 46 million cubic metres as of July 2016. “Historically the company was a state-owned storage facility that was established in 1971 as part of a state decision to create a strategic oil reserve,” elaborates STORAG ETZEL CEO, Thomas Kleefuß. “Soon after the idea of 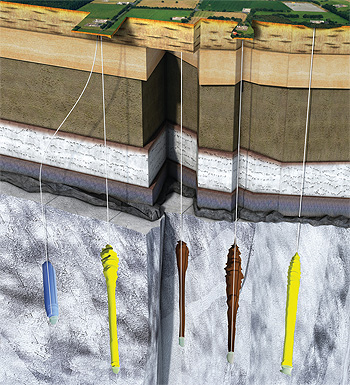 utilising the region’s salt deposit for storage purposes solution mining started and today STORAG ETZEL represents one of the favourite geological sites for storage caverns within Germany as well as northwest Europe.”

Indeed, the German government’s decree to establish a ‘Federal Petroleum Reserve’ quickly led to the commencement of leaching operations business was transferred to that of a private entity during a two-stage movement between 1986 and 1993 when the business was completely privatised, while the company acquired the cavern system in 2005 and extended the cavern site to its current dimensions.

The storage cavern field at Etzel has experienced significant growth and diversification throughout the history of the site, with the first phase of expansion taking place between 1994 and 2004. Since 2007 STORAG ETZEL has continued to redevelop the cavern facility from a mere crude oil storage site into one of the largest gas storage facilities in Europe. “The past years have been very successful for the company, because we have continued to develop since 2009 by opening more than 30 new gas caverns,” Thomas reveals. “We are now in the process of completing a final two gas caverns, which will be handed over to the customer in the first quarter of 2017 – both on time and in budget according to this latest development period.”

The Etzel cavern site has been formed in association with engineering companies such as DEEP and KBB that can each demonstrate proven experience in the construction of storage caverns. STORAG ETZEL utilises two 44” pipelines in close proximity with the North Sea that work in unison to both import water for the leaching process and to then return saturated brine back to the sea. Salt cavern capacity is standardised between 600,000 and 900,000 cubic metres at depths of more than 1000 metres. The deep caverns are favourable for gas storage, offering maximum pressures of 200bar and the large working gas capacity of 75 million cubic metres, which are of great benefit to its clients.

The completed caverns are rented to companies operating within the energy market and to Europe’s petroleum stockpiling agencies. The caverns are further connected to the European energy grid via oil and gas pipelines and are employed by clients to cover peaks in consumption and as an interim storage medium for import deliveries, in addition to its role as a significant contributor to the storage of Germany’s strategic oil reserves. This has shielded the business to some degree against the impact of the global fall in oil prices, as the focus of the business has been on long-term 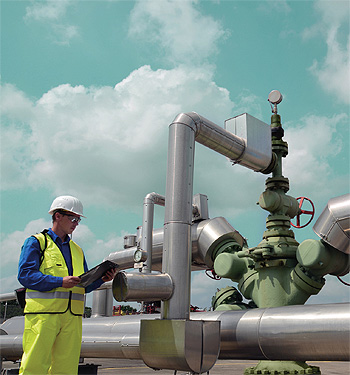 stockpiling rather the rapid transition and sale of oil. “We are focused on providing a long-term storage capacity, where the average contract for storage is between three and eight years,” Thomas says. “STORAG ETZEL has been successful at a time when the oil price is low and operators are speculating on rising prices. The past two to three years have been very positive for us on the oil side but limited in terms of growth activities because we were not able to market new caverns for the long-term. The leadtime for developing caverns is relatively long and the volatility in the market has meant that expectation is short.”

Despite the implications of the fall in the price of oil, the market for the storage of oil and gas is becoming more important than ever. Increasingly the extraction of most raw materials takes place in politically unstable regions, meaning that both commodity pricing and supply are subject to strong fluctuations. Both oil and gas operators and European governing bodies are actively seeking to counteract the effects of these fluctuations by establishing an appropriate storage infrastructure. “Our position here in Etzel is quite advantageous in that we have the potential to develop more than 24 caverns in the area,” Thomas explains. “If you look at Europe in general, there are not a lot of states other than Germany that have already built up their strategic reserves. Given the current geopolitical risks occurring globally, there is a possibility that other states will look to store their oil here, as we are situation close to a comprehensive export network. Customers including Belgium and the Netherlands store part of their strategic reserves here for example.”

The storage caverns governed by STORAG ETZEL are currently fully booked for the next 12 months, as clients have moved quickly to take advantage of the availability of longterm oil and gas storage. The development of alternative energy solutions such as LNG and renewables are increasingly changing the face of the global energy market and offer interesting future possibilities for STORAG ETZEL to further increase its storage capacity in the near future. “In the mid-term there are two projects in particular that could result in an interesting opportunities for STORAG ETZEL,” Thomas concludes. “The first of these is the on-going discussion relating to a future LNG terminal in the region, while the potential for upgraded gas transport pipelines could bring more gas into Western Europe. Currently our focus will remain on oil and gas, however our advantageous position means that we are also well placed to offer solutions for alternative energy types.”

*STORAG ETZEL GmbH is a wholly owned subsidiary of IVG Immobilien AG, a conglomerate headquartered in Bonn, Germany, focusing on office real estate in various domestic metropolitan areas. Mid 2016, IVG completed the project of renaming its subsidiaries, resulting; amongst others; in the company name STORAG ETZEL. Enabling the company to pursue a self-contained and committed market approach, independent from other business lines of the parent company, was the primary objective of the company’s rebranding. STORAG ETZEL was formerly known as IVG Caverns GmbH

Services: Caverns for storage of oil and gas