Back to Profile Gallery > Storengy UK

Storengy is a company of French energy major GDF SUEZ that specialises in the underground storage of natural gas.

Storengy is Europe’s leading light in its field and operates one of the world’s largest network of facilities: 22 sites across France (Storengy SA), Germany (Storengy Deutschland GmbH), and the UK (Storengy UK) holding 12.5 billion cubic metres of useable gas. The business also stands out as one of the few companies able to exploit all storage possibilities whether in salt caverns, aquifers, or even depleted gas fields.

Storengy UK is a subsidiary that, currently, does not handle an operational facility. Since 2007 the company has been working on its inaugural Stublach Gas Storage Project (SGSP) in rural Cheshire, a highly flexible salt cavern storage centre that will contain a total of 20 caverns. Because the country imports 75 per cent of its gas capacity, advanced storage facilities play an important part in propping up the national energy infrastructure. The last time Storengy UK was featured in European Oil and Gas Magazine, the recession had just begun to loosen its grip and the company was confident in the long-term viability of its SGSP project.

Two years on, managing director Bruno Leray reflects on how business has fared: “The last two years were marked by the aftermath of the economic turmoil with a stagnating gas market and a sustained situation of a gas bubble. In that context the market became more challenging for storage operators. We will deliver our first capacities during winter 2013 and build our client base from that date. The global evolution of the UK energy market, where the renewable power generation sources are likely to play an increasing role, will generate more volatility of gas consumption and increase the need for flexible services.” 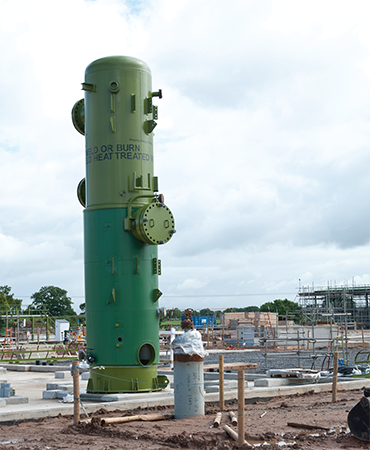 The role that SGSP will play in the UK energy market is immense. At the time of the last article’s pressing, phase one of construction was being completed. Today, significant progress has been made toward the commissioning in 2013. All 20 of the wells have been drilled and are currently being leached, whilst surface facilities including two gas compressors, two dehydration towers, metering systems, and pipeline connections to the national transmission systems (NTS) have been constructed. “The main challenge so far, as it is for any long lead-time project, is to keep on track,” says Bruno. “That is something we have achieved up until now.”

One of the biggest concerns when creating such an immense site is the environmental impact not only of initial construction but total lifecycle operations. Storengy UK has therefore implemented eco-awareness at every stage of the project. “We have been proactive in ensuring that all activities on the Stublach site have minimal impact. The Storengy UK Environmental Fund was officially launched in April 2008 during a Local Liaison Committee (LLC).

“This fund demonstrates Storengy UK’s commitment to the environment and local communities in the Stublach area. Residents can apply for funding to finance local community projects that have a genuine impact upon the environment and that in turn produce beneficial results in their local area. Furthermore, extensive measures have been taken to protect the newts that live across the farmland associated with the SGSP site because they are a protected species. The noise level will be very limited and the plant itself will disappear behind the curtains of the 67,000 trees we planted all around the facility.”

Storengy was established as a company of GDF SUEZ on 1st January 2009. Since that time, both the French and German entities have gained great success in their respective markets. Storengy SA has a total working capacity of 10 billion cubic metres across 14 sites, including one operated by Storengy SA but owned by Géométhane. It currently has nearly 30 clients. Storengy Deutschland GmbH, meanwhile, is a smaller operation at two billion cubic metres across seven sites for its 15 clients. It also has one salt cavern under development.

The contribution that Storengy UK will make to the Storengy network is clearly significant. SGSP will benefit from the experience, resources, and organisation driving the French and German companies, becoming an essential asset to the overall network.

However, as Bruno points out, Storengy UK will also be an important addition to the UK’s NTS and future energy infrastructure. “The UK is the largest European gas market, but it is true that with only five per cent storage capacity/gas consumption ratio, it is well below EU average. However, projects of that sort are capital intensive and unlikely to occur at a large scale. Indeed, Stublach is the only sizeable and concrete gas storage project expected to be commissioned within the next four years in the UK. It will respond to the UK domestic increasing short-term demand volatility.”