Headquartered in Deggendorf, Germany, the group employs 3000 people across its numerous facilities and ensures tight integration across the organisation to provide a strong, unified service for all its customers. One of the group’s involvements with the oil and gas sector is through STREICHER Drilling Technology, a subsidiary developing and manufacturing new equipment for clients across the world.

STREICHER Drilling Technology was previously featuring in European Oil and Gas in 2010/5, at which time the company was in the process of finalising its first offshore modular rig. The 400sT rig was built in conjunction with ARCHER and features multipurpose drilling/ workover/snubbing/plugging and abandonment functionality, flexible arrangement, lightweight modular units and a 14-day rig up time. The rig has since been delivered to ARCHER’s client Shell Todd at its Maui A platform off the coast of New Zealand, where it has been set up without incident and is currently in the commissioning phase with a lot of promise on show. The modular capability of the rig is innovative and its developers believe it will mark a major shift in the way offshore rigs are built in the future. 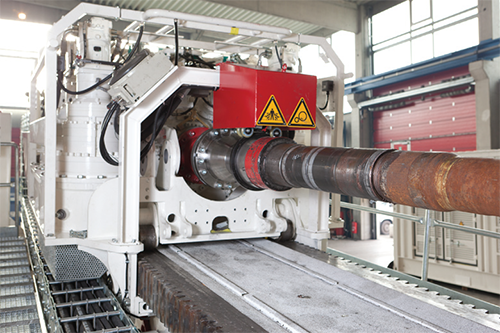 In the 18 months that have passed since mid-2010, many other changes have occurred within STREICHER Drilling Technology. Head of development and design Andreas Beck discusses them further: “We have consolidated the existing business in designing and manufacturing mobile, modular, and horizontal drilling rigs. In addition we opened our services of maintenance, overhaul, repair, and rig moving to companies outside the group with good success and customer satisfaction. The integration of what was formerly SATVIA, based in Gommern, has proved a very good supplement to our existing portfolio. Activities on the international market have also expanded in order to reach more potential customers and to make people aware of our various products and services. We have also seen a slight shift in our market, with a growing focus on customised solutions featuring a high proportion of engineering as well as on offshore technology.”

At the heart of STREICHER Drilling Technology’s activity is its research and development of technology, and the last 18 months have seen no shortage of work in this area. One of the most significant projects was the manufacturing of three horizontal drilling rigs. The STREICHER HDD 350 horizontal drilling rigs, which were launched in summer this year, represent an innovative new product to the market, being the first slanted drilling rig with a rack and pinion drive and explosive protection.

While slanted drilling is by no means a new technology the STREICHER HDD 350.6 represents a significant step forward in this particular drilling technology, as Andreas explains: “Slanted rigs used until now were merely deep-drilling rigs with a grid winch system placed in a tilted manner. Thus, they can only exert tensile forces with their standard configuration and require rope guide systems in the slanted position. However, compressive force often has to be exerted on the rods during slanted drilling. Hence, the rigs used until now required expensive add-on technology, which is not necessary with our HDD series.”

As the HDD 350.6 is tailored specifically for slanted operations it provides a number
of significant benefits, including increased efficiency both in terms of time as well as output. The aforementioned explosion protection is another key feature of HDD 350.6, which significantly increases its overall area of application. For example, the rig is fitted with special components that allow operation in potentially explosive atmospheres and eliminate sources of ignition. It is also fitted with equipment and software for controlling the drill hole, which allows it to drill oil and gas fields close to the surface. HDD 350.6 has already proven itself in a project in the North of Germany, and it will soon be in operation in Brazil also.

Currently in the detail design stage, STREICHER Drilling Technology is also working on a brand new land rig model that will offer a series ranging in size from 275 to 500 short tonnes. Intended for the European market, production of the first unit from the series – a 275 short tonne model – will begin in 2013. In addition to this the company continues to work on its portfolio of truck- and trailer-mounted, and slanted drilling rigs.

“It is challenging to bring new developments and ideas into a very conservative market but we receive more positive feedback every month and can feel a change of mindset in many companies,” Andreas says of the oil and gas market. “There are many good upcoming opportunities for our business that are a logical continuation of our past. Trends in this respect include customised solutions on a basis of flexible standard package; hands-off requirements and safety aspects; mechanisation and automation; low energy consumption and environmental footprint; as well as fast and efficient rig-moves.”

Looking forward, STREICHER Drilling Technology is already securing prospects for the future. It is currently in the middle of a North Sea contract, which will see the delivery of more offshore rigs in the future. Being a leader in the development of technology will also stand the company in good stead for the future as majors around the world forge partnerships in order to access these developments first. “I think STREICHER will be one of the common names in the industry over the next three to five years,” Andreas states. “I am convinced that with more and more references, as well as satisfied customers, in combination with the strength of a flexible, healthy, and independent medium sized enterprise this vision will come true.”