Back to Profile Gallery > Svitzer A/S 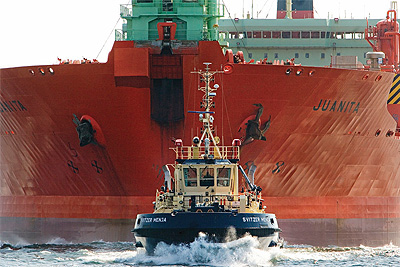 With roots dating back as far as 1833, Svitzer A/S has well over a century of experience of operation within the marine and offshore environment. The business was originally established as a services and salvage company in response to the significant losses occurring on the trade routes to and from Denmark. Today Svitzer has evolved into a leading provider of towage and associated services with clients and offices across the globe. The company as it is recognised today was purchased by the Maersk Group during 1979 and today forms part of its parent company’s APM Shipping Services division along with Maersk Tankers, Maersk Supply Service and Damco.

Following its acquisition by the Maersk Group, Svitzer began a determined path of growth and internationalisation beginning withthe purchase of the Swedish towage company, Röda Bolaget during 1999. Several other acquisitions followed, including the significant addition of Adstream in 2007, which helped to transform Svitzer into a truly global enterprise. During this period as well as in recent years, Svitzer has continued to enjoy impressive levels of growth by providing services to clients within a number of industry sectors. Further to the provision of towage operations Svitzer is also able to offer its clients a comprehensive portfolio of support services including piloting, line handling and pollution control operations.

“Svitzer is today primarily engaged as a towage company, providing towage services to the wider shipping industry. We also provide a lot of services to the oil and gas market and this is actually where we have seen the most growth during the past eight years,” explains Group Chief Commercial Officer, Kasper Nilaus. “During this time we have won more than 50 per cent of the tenders for towage services to large LNG export terminals. Therefore we have seen quite a lot of growth globally in the LNG export terminal market and have been fortunate enough to pick up long-term contracts with many of the oil majors.” 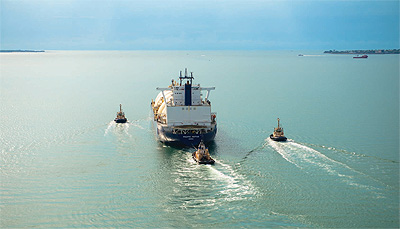 During January 2014 it was announced that Svitzer Australia had signed at 20-year contact with the Chevron-operated Wheatstone LNG terminal project in remote North Western Australia. Commenting on the significance of winning the prestigious project, CEO Robert Uggla said: “Winning the Wheatstone project is a tremendous achievement of a great global team pulling in the same direction across offices and functions.”

Preparations for the Wheatstone project are ongoing with operations due to commence during 2016, while a further project for Chevron for its Gorgon LNG terminal commenced in July 2015. Located on Barrow Island in West Australia, the Gorgon project represents a 20-year contract between Svitzer and a joint venture of the Australian subsidiaries of Chevron, ExxonMobil, Shell, Osaka Gas, Tokyo Gas and Chubu Electric Power. “These kinds of project are won through an international tender process which can take years to pass through as there are various stages of approval and quite intense competition for such contract.” Kasper adds. “The next step after winning these tenders is to begin the construction of the vessels that are needed. We have built four tugboats specifically for the Gorgon contract that are tailor made to work in this environment. What is interesting about this contract apart from its size is that operations will take place inside of a nature reserve, so in order to win the contract it was necessary to design tugboats that are very environmentally friendly. We have batteries on board the vessels as well as various types of insulation board so that the tugs do not produce the same level of noise as other tugs. The ECOtugs also don’t emit as much light as other vessels as this was a requirement due to the Class A nature reserve in which they operate.”

In addition to winning several high-profile and prestigious projects in recent years, Svitzer is keen to continue its growth in markets like South America and Asia, as Kasper concludes: “Like many companies we want to grow and are currently focusing on expanding within Brazil and in Asia. We recently established a separate Asia division to the business to support growth in countries such as China, Malaysia and Indonesia specifically. Over the next 12 months we will be very focused on developing our growth in those regions and over the longer term we want to keep growing and continue to transform the towing industry. For example we have been at the forefront of developing environmentally friendly tugboats, which are currently in operation within Australia and Scandinavia and will be operating four more in Australia at the end of 2016. We are also taking part in a joint development project with Damen Shipyard for the development of Compressed Natural Gas (CNG) tugs. All in all we are at the forefront of safe, reliable and innovative solutions in order to meet the current and future need of our customers.”