“The offshore oil and gas services market has continued to strengthen over the last year, boosted by the robust price of oil and the continuing strong demand for energy from Asia,” explains George Horsington, general manager of Swire Pacific Offshore.

“Drilling activity continues to pick up around the world, and this is highlighted by the fact that many of the company’s major clients have put into place plans for both important field developments and high impact exploration programmes.”

Established in 1975, Swire Pacific Offshore has since gone on to build itself a reputation for being a leading service provider to the offshore oil and gas industry, with a network that spans the globe. An owner and operator of more than 75 offshore support vessels, consisting of a mix of anchor handling tug supply boats, PSV’s, ice breakers, tugs and seismic survey vessels, the company’s modern fleet has an average age of ten years. A large proportion of the fleet is equipped with dynamic positioning systems.

“Over the last 12 months the company has witnessed a steady and sustained increase in vessel chartering activity, which is particularly heartening after the slowdown the industry felt in the immediate aftermath of the financial crisis,” George continues. “What we are seeing now is our clients are looking for higher capacity, modern PSV’s that boast DP2 capabilities to support deepwater drilling. Swire Pacific Offshore has taken delivery of two new vessels in this category over the last years, with eight more on order from shipyards in Brazil and Japan.”

The continued expansion of the company’s fleet is the result of a comprehensive, ongoing investment programme to increase its size to 100 vessels by 2016: “Rather than remaining static, the demands of the offshore industry are in fact rising all the time,” George states. 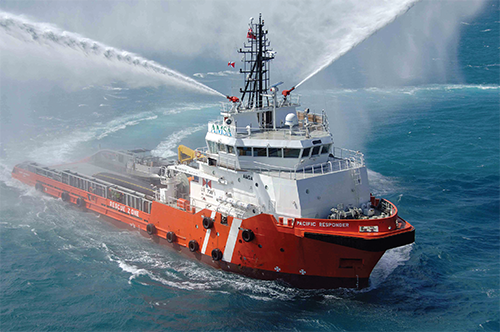 “Often those within the company joke that our vessels have to, in many ways, be like Swiss Army Knives, in that they need to be capable of providing many different services for our clients, all in the same hull.

“Dynamic positioning is obviously of great importance, but different clients are always looking for greater flexibility, for example, high cargo capacities that allow for the carrying of large volumes of liquid mud, bulk and specialty chemicals, like glycol and methanol. Additionally, the company sees firefighting, the provision of fast rescue craft, and vessels with large amounts of deck space, as critical.”

As a part of this programme, the last year has seen Swire Pacific Offshore take delivery of its largest ever platform vessels, the Pacific Hawk in August 2011 and its sister vessel the Pacific Harrier, which arrived in March 2012. As it stands in April 2012, the Pacific Hawk can be found working with a deepwater rig off the coast of Malaysia, while the Pacific Harrier has also won work, in this case with a dynamic positioned drillship based in Asia. The demand for the services of these vessels can be put down, in part, to their ability to carry some 4700 tonnes of cargo and the high degree of flexibility in their tank configuration.

“Later in 2012, Swire Pacific Offshore is scheduled to take delivery of a further two accommodation barges from Boustead shipyard in Penang, Malaysia,” George reveals. “These two barges come equipped with 200 tonne cranes and enough capacity to accommodate 300 passengers. Where they differentiate themselves is in the fact that the accommodation quarters are made up of one or two man cabins, each with en suite facilities. What this means is that they offer a significantly better standard of accommodation for offshore workers. Such quality is particularly important in demanding markets like Australia, but also in Asia, where the expectations of life offshore are gradually rising in line with onshore incomes.

“In addition to these upcoming developments, the company’s first windfarm turbine installation vessel, the Pacific Orca, will be delivered in 2012 from Samsung Heavy Industries in Korea. The first of two of such vessels being constructed for Swire Pacific Offshore to support its contracts for renewable projects in the North Sea, the Pacific Orca is a six-legged, dynamically positioned jack-up with a 1500 tonne crane that will be used to lift and install massive offshore turbines into position in up to 60 metres of water. Upon entering service it will take its place as the largest, most expensive and most technically complex vessel in the company’s fleet.”

Swire Pacific Offshore prides itself on its ability to deliver consistently excellent marine services. For more that 150 years the Swire family has owned ships, and its success is derived from always being committed to a long-term plan and from working to promote from within in order to maintain its culture: “What the company does is try to provide a consistently high standard of service to its clients the world over, doing difficult jobs, be it ice breaking or deepwater anchor handling, safely, even in challenging environments,” George says. “The company definitely sees the future of the offshore industry as being driven by the drilling of deep wells in deeper waters, often distant from the shore and in what can be difficult environmental conditions.”

As its new building programme continues there are several trends that are driving the company forward and are helping it to evolve: “The ships Swire Pacific Offshore operates are clearly getting bigger and becoming more complicated, yet at the same time are getting safer and more efficient. These characteristics meet the higher expectations that our clients have today. With the massive investment the company is making in both people and ships, we hope to be able to meet such demands in the professional manner the Swire Group has become renowned for, for the foreseeable future,” George concludes.