Back to Profile Gallery > Swissgas

The purpose of the company is to procure natural gas and to supply Switzerland with natural gas in all its forms, and to safeguard natural gas-related interests in Switzerland and abroad, while working in partnership with regional companies. Switzerland’s demand for natural gas amounts to less than one per cent of that of the whole EU – around threequarters of the natural gas procured by western Europe’s major suppliers is produced in Europe, especially Norway and the Netherlands.

Swissgas operates as a non-profit-making purchasing pool on behalf of the four Swiss regional distributors, and the local gas utilities behind them, approximately 100 in number. Thus Swissgas ensures secure, permanent procurement and associated transmission of around three-quarters of the natural gas consumed in Switzerland.

Swissgas began procuring natural gas in 1974, initially buying it from the Netherlands. Ever since, the natural gas has been entering Switzerland at Wallbach, situated east of Basle in the canton of Aargau, crossing Germany via the Trans-European Natural Gas Pipeline. Subsequently, other long-term contracts have been signed with reliable and competitive suppliers, guaranteeing a secure and efficient supply of natural gas. 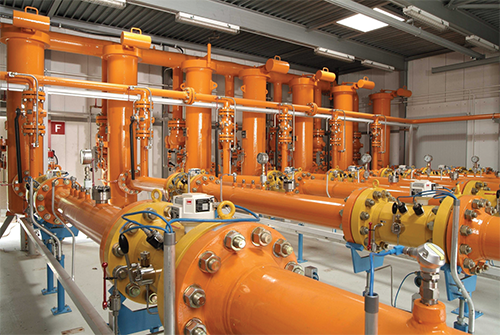 Swissgas has a number of contracts to procure natural gas. The periods of validity and the associated contractual obligations to buy are between one day and several years and will last on average until at least 2014 and in some cases until 2020. It is on the basis of these contracts that Swissgas can guarantee being able to procure an adequate and efficient supply of natural gas in the long term. There are also long-term direct buying agreements signed by the regional companies Erdgas Ostschweiz AG, Gasverbund Mittelland AG and Gaznat SA.

Furthermore Swissgas is shareholder of Bayerngas Norge, who meanwhile holds stakes in fields in Norway, Danmark and UK. Swissgas involvement is a step further into covering all steps of the supply chain of natural gas.

For the transmission of natural gas, Swissgas operates its own high-pressure pipelines in Switzerland. It also has a share in the cross- Switzerland gas pipeline to Italy (Transitgas) and holds transmission rights abroad.

In April 1974 the Transitgas pipeline came on stream as part of the high-pressure natural gas pipeline from the Netherlands to Italy. This important international transport route is essential in supplying Switzerland with natural gas.

Since 1994 the Transitgas system has been gradually extended in various stages. Especially noteworthy is the massive expansion of the transport system, which took place between 1998 and 2003 because of the growing transport needs of Eni S.p.A. To comply with the Energy Preservation Act passed by the authorities in Lucerne the waste heat from the gas turbines is used to generate electricity and to heat a greenhouse for tropical produce.

The shareholders in Transitgas AG are Swissgas, Eni and Ruhrgas. The capacity on the section of pipeline from Wallbach to Griespass is shared between Eni and Swissgas. On the branch pipeline from Rodersdorf to Lostorf, Eni has sole use of the capacity. Transitgas AG is responsible for running and maintaining the pipeline system.

Swissgas mainly operates the following four high-pressure pipelines, which lead from the Transitgas pipeline to the various regions:

The dispatch department at Swissgas co-ordinates and controls the flow of natural gas at the customs metering stations according to the orders for natural gas from the various regional companies. To guarantee safe and reliable transport of natural gas at all times, the systems are monitored round the clock and periodically inspected on site. Moreover Swissgas coordinates the interest of the high pressure pipeline operators concerning the technical regulations in Switzerland.

With the residents and businesses of Switzerland depending on Swissgas for their fuel needs, the company plays an essential role in the success of the country. By continuing its hard work and dedication to maintaining strong relationships, Swissgas looks set to remain a reliable and trustworthy supplier for years to come.