Back to Profile Gallery > Technip Benelux

Technip Benelux operates as part ofits parent company the Technip Group. Basedin the Netherlands the firm has recently become part of a newly organised division within the group.

Founded in the third quarter of 2012, Technip Stone & Webster Process Technology(TSWPT) amalgamates several companies intoa single group centered around a core businessfocused on plant process design. Technip Benelux traces its roots back to 1963 when the company was founded as Kinetics Technology International(KTI) before becoming part of the TechnipGroup in 1999. During its history the company developed a critical understanding of the hydrogen generation and ethylene cracking technology, which made it a logical inclusion in the formationof the new process technology division.

“I don’t think it is too modest to say that we are world leaders in these fields,” exclaims HansT.H. Brasker, vice president execution for TechnipBenelux. “In hydrogen, we have 35 per cent ofthe global market share, which I think justifies our position as being world leaders in that area.”

The company’s proficiency in these fields hasenabled it to operate on a truly global scale and led to impressive technical innovations that have helped differentiate the company from other players in the same markets. Within theethylene-cracking sector, Technip Benelux hasdesigned a cracking tube that is designed to beinstalled in an ethylene plant’s furnace. ThisSwirl Flow Tube® achieves longer running time for the furnace and critically, a higher capacity. This is of particular importance in the ethylene industry, which as a base product is fundamental in the formation of plastics. It is a volatile sector that is hugely dependent on the ebb and flow of global economic conditions, with many countries still recovering from the global recession efficiency is of paramountimportance. However, rather then being an obstacle for Technip Benelux, the downturn in demand for the ethylene and plastic consumer products has actually provided the company with an opportunity to showcase the benefits of its services, as Hans elaborates: “The clients for ethylene are in the petrochemical industry, you will understand that in the countries that are suffering from the recession now, ethylene demand has been quite low. Although this trend also affected Technip, the company has been fortunate in that over the years it has had a constant base in ethylene, thanks to its creativity in modernising and upgrading existing plants. 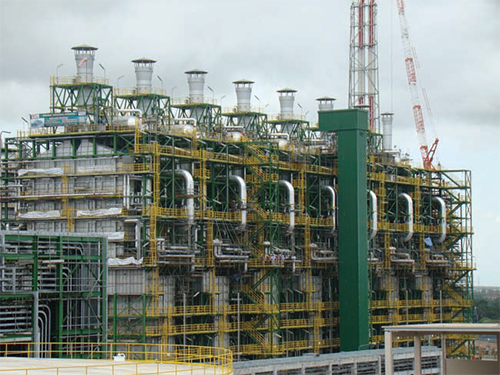 “Since the founding of the company we have developed and applied various methods for revamping existing ethylene plants, thus enabling clients to introduce new technologies in their existing plants. We have created a particular market in this fashion, which has been very successful. Especially in periods of downturn, it puts an extra challenge on us to introduce innovations into existing plants in a cost-effective manner.”

In addition to that, Technip Benelux has developed a special software package for plant operation analysis, named SPYRO®. The package enables clients to simulate the performance of a cracking furnace to accurately predict the yield of the cracking process, thus enabling clients to optimise the operation of their plants to the ultimate limit. With the latest version of the software package, SPYRO® Suite 7, users are offered the state-of-the-art simulation technology for ethylene processes with a wide range of applications.

The hydrogen market is slightly different from the ethylene sector in that is it further upstream in terms of production process. The majority of Technip Benelux’s clients in the hydrogen sector are oil refineries, in which hydrogen is an increasingly utilised element. The gas is vital in the production of clearer fuels, which in the current environmentally aware age is increasingly important. This coupled with a global interest in increasing efficiency, has spurred a greater demand in the supply of hydrogen, as Hans explains: “For the worldwide interest in producing what are called clean fuels, the demand for hydrogen in refineries goes up. Hydrogen is useful in producing cleaner fuels and while the standards of clean fuels are not yet consistent all over the world, some countries make steeper progress on this than others, but all over the world hydrogen demand is increasing. So the client finds that they need to either invest in a new hydrogen plant or an expansion of their existing hydrogen plant.”

The company has been incredibly successful in helping customers realise greater production potential, helping it to maintain its 35 per cent market share has been a host of innovations and new products. Within the hydrogen sector one example of this is its Technip Parallel Reformer (TPR®), which can increase the capacity of an existing hydrogen plant by 30 per cent. The implementation of the TPR® is relatively simple and can be completed in a single plant shutdown, which can be scheduled around routine plant maintenance to eliminate costly delays during installation.

Technip Benelux is not limited to its core services within hydrogen generation and ethylene cracking; through its years of experience it is able to provide world-class expertise as an engineering, procurement and construction (EPC) contractor. This means that if it sells a client a piece of technology it is able to offer a comprehensive package of detailed engineering, procurement, construction, start-up and aftermarket services, extending the company’s relationship with its customers and generating future business.

Recently, Technip also celebrated a 20-year milestone in its alliance with Air Products. The alliance was formed in 1992 to address a global demand for hydrogen generation and cleaner fuels, regarding the partnership Thierry Pilenko, Technip’s chairman and CEO, states: “Technip is proud to be a member of this alliance. The valuable feedback we have received from the plants designed for Air Products, coupled with Technip’s high standards in design and engineering, have improved long-term operations, where reliability over the years is the main focus. In the end, the refining industry benefits by receiving a reliable and cost-effective source of hydrogen. In addition, our global footprint ensures that Technip can accompany its clients around the world, on their projects of tomorrow.”