Back to Profile Gallery > TEEMCO 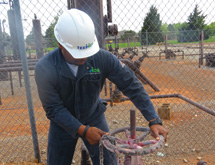 Already a renowned expert in providing environmental services, TEEMCO has expanded to create a new division that focuses on controlling emissions in the oil and gas industry.

CEO Greg Lorson in August announced the merger of the company’s new division, TEEMFLO, which focuses on controlling emissions.

“It’s all about managing flowback emissions,” Lorson says. “It reduces the possibility of emissions getting into the air. It’s one of the most important issues in the oil industry now.”

TEEMCO describes itself as a one-stop shop for environmental engineering in the petroleum, agriculture and marine industries. Clients have peace of mind because TEEMCO focuses on environmental regulations while they are free to focus solely on operations. Its mission is to get clients into compliance with state and federal environmental regulations and keep them there. The company guarantees its work by promising to pay clients for any fines levied by the EPA if its work is at fault.

In its five-year life, Lorson says TEEMCO has grown to possess the highest market-share of any company in its field – 18 percent. “The typical environmental engineering consultant’s profile is 10 or less employees and half-a-million or less in annual billing,” Lorson says.

“We do that much billing in a week, and we’ve got 10 times the employees that the average firm has.

“We do not believe that being bigger makes us better, but we are bigger because we’re better.”

‘Completely Green’
The newly formed division, TEEMFLO, will be deploying the latest emission control equipment during the next 12 months to oil and gas companies’ drill sites. The new equipment, developed by TEEMFLO, will capture 99 percent of VOC, GHG and other harmful emissions, Lorson says.

The equipment’s technology is proprietary but it’s basically a three-phase separator that separates oil, water and gas, Lorson explains. Regulations have forced us to become completely green, control these vapors and sell them as commodities or flare them without emitting them back up into the air.

TEEMCO’s current system requires five to six pieces of equipment to control emissions, but the company’s new technology will require only one contained unit to prevent vapors from being emitted. “We currently use a closed-loop system to capture and destroy emissions,” Lorson says. “The TEEMFLO system of tomorrow will be a closed-loop system but it’s self-contained into one piece of equipment.”

Fugitive emissions are those that escape from joints, valves and hatches. They occur no matter how tight a joint or hatch may be, Lorson explains. With the new self-contained equipment, Lorson says TEEMCO will virtually eliminate fugitive emissions by dramatically reducing the number of escape routes.

TEEMCO’s current emission-control system, FlowDaddy™, consists of a 500-barrel pressure vessel that separates the fluid from the gas. The gas is then directed to a flare, which destroys the emissions. The gases could be directed to a gathering system, when available, and then sold.

On a typical job site, the FlowDaddy might require 30 inlets and outlets and another 30 connections traveling across the job site, Lorson explains.

“The new FlowDaddy will be a system that does everything we just talked about but on one truck-mounted vessel,” Lorson explains. “When you have 30 connections, you have 30 chances of failure. Now with this system, we will do it all within a single piece of equipment – one inlet and one outlet.”

Because the new one-piece system will mount on a truck, TEEMCO can get closer to the drill site and not require the additional connections.

According to the EPA, the regulation is expected to yield a nearly 95 percent reduction in VOCs emitted from more than 11,000 new hydraulically fractured gas wells each year. Under the rule, producers are required to use a procedure known as a “reduced emissions completion” or “green completion” to capture natural gas and other harmful air pollutants that currently escape into the air. In a green completion, special equipment such as TEEMCO’s FlowDaddy separates gases and liquid hydrocarbons from the flowback that comes from the well as it is being prepared for production.

Many oil companies have already started to use green completion technology. The companies are required to fully implement this practice by 2015. The EPA estimates that when fully implemented, this rule will reduce emissions by more than 33 million tons per year.

“As a service firm, we design around what [clients] are telling us they need,” he says. “When they tell us they need something, sometimes it takes several years to come up with the solution.”

Part of the demand is also driven by oil and gas companies wanting to voluntarily reduce emissions ahead of the new EPA rules.

“Ten years ago, the industry was generally unaware of some of the dangers these emissions pose to the health of workers and communities,” Lorson says. “Now that the industry is aware of it, oil companies are taking proactive steps to control emissions and to comply with regulations.”