The only independent gas processing plant in the country, Teesside Gas Processing Plant (TGPP) located on Teesside in the northeast of England consists of two gas processing trains with a combined capacity to process about six per cent of UK daily gas demand: “By not being set up as an organisation with the sole intention of processing its own gas, TGPP is able to carry out its operations with a much more customer focused approach,” states David O’Donnell, Commercial Director of TGPP Limited.

Since its construction TGPP has been operated and managed to world-class standards by a hughly motivated team, some of who have been at the gas plant since its inception. Originally an investment owned by Enron, the first phase of development began with the construction of Train 1 in 1992 to process gas from the then recently discovered Everest and Lomond fields to provide fuel for the gas fired Teesside Power Station, at the time the largest gas fired power station in the world. Train 2 followed a few years later after the announcement of the development of the ConocoPhillips operated J-Block group of fields, with Train 2 entering full commercial operation in 1997.

Despite the much-publicised collapse of Enron in 2001, TGPP continued as a viable business and has evolved into the current set-up with plant operations being run by the px Group on behalf of TGPP Limited. This strong relationship has fostered the continuing development of a well constructed, well maintained asset, staffed by highly trained and motivated staff with the appropriate systems and procedures in place to deliver a top quality processing service, all achieved while maintaining the highest standards of safety and environmental compliance.

TGPP processes gas on behalf of a number of large multinational oil and gas companies including ConocoPhillips, Eni, BG, bp, Chevron and OMV. Sourced from the Central North Sea region of the UK Continental Shelf, gas is first transported to TGPP via the bp-operated Central Area Transmission System (CATS) offshore pipeline system. TGPP then processes the gas to meet the stringent specifications required for sales gas to enter the National Transmission System (NTS). As part of this processing natural gas liquids (NGLs) are extracted from the gas and are then fractionated into separate products of propane, butane and condensate which are exported to local petrochemical infrastructure on Teesside, much for further use as chemical feedstock. “One advantage of TGPP” says David “is that the plant was designed from the outset to extract high volumes of Natural Gas Liquids (NGLs) from the raw gas. As these are liquid fuels, NGLs are priced against oil rather than gas. Due to rising oil prices and steady gas prices, NGLs are now worth around twice the value of gas when compared on an equivalent basis so we find that our ability to extract substantial volumes of NGL is a valuable service for our customers.”

One of the largest chemical and industrial locations in Europe, the Teesside region is home to an extensive network of pipelines and utility services that connect the area, creating a vast infrastructure that continues to attract petrochemical and energy intensive businesses. “Clearly it was no accident that the CATS pipeline and TGPP came to be located on Teesside,” says Andy Heppel, Chief Executive Officer of TGPP Limited 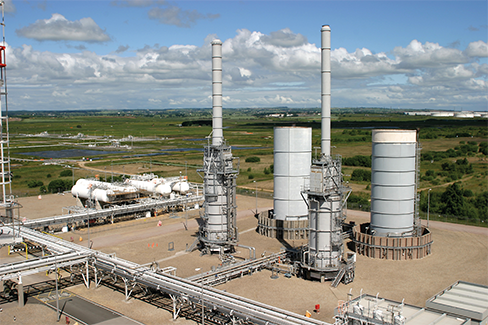 “The CATS pipeline runs through much of the Central North Sea and has a large catchment area, therefore both it and TGPP are extremely well placed to capitalise on gas production in an area of the North Sea, which we believe still has substantial opportunities for new development of oil and gas projects. Then there is the new 100km offshore pipeline, which is currently in the process of being constructed by the Breagh owners, RWE and Sterling Resources, to connect the Breagh gas field to TGPP, with first gas expected next year. So, as you can see, these developments offer a real insight into the reasons why 2011 is a very exciting time for TGPP as we develop new infrastructure for the Breagh project and are making significant investments in existing infrastructure to create increased processing capacity and to further improve our NGL recovery capability.”

As well as providing clear evidence of TGPP’s growth and future prospects, Andy also hopes the company’s activities in the North Sea help disprove one popular misconception: “People often seem to be under the impression that the North Sea is on its last legs but this clearly isn’t the case.” According to estimates made by the Department of Energy and Climate Change there are approximately ten billion barrels of oil equivalent still present on the UK continental shelf and about 45 per cent of that is expected to be found in the Central North Sea itself. “In real numbers, that equates to about 4.3 billion barrels of oil equivalent and at least 30 per cent of that is likely to be gas. That’s about 7.3 tcf of gas still to be found and developed,” adds David.

Such statistics obviously provide Andy with a lot of optimism when it comes to TGPP’s upcoming projects: “In terms of the Breagh project it is very exciting to have a new pipeline that will be bringing gas from what is essentially an untapped area of the North Sea. As a result of being positioned between the resource rich Central North Sea and the classic Southern gas basin, the Breagh area has been somewhat ignored up until now. Breagh itself represents one of the largest undeveloped gas fields in the UK and now that the required hub and pipeline infrastructure is being put in place, we believe that exploration will pick up in the surrounding area in the years to come as the Breagh gas begins to flow.”

One aspect of the business in which TGPP Limited and its operator, px Group, share a particularly high level of pride in is the gas plant’s excellent safety record and the commitment to making health and safety the upmost priority. The gas plant’s various performance awards help highlight how the plant’s operations team strives to achieve not only the best in class standards for performance and plant availability, but also the highest level of health, safety and environmental management, an attitude to working that Andy stresses starts from the top down: “Every task undertaken at the plant is carried out with safety in mind. If there is ever any doubt, whether it comes as a result of carrying out risk assessments or examining the integrity of the plant, TGPP always errs on the side of caution, and ensures that if changes to operational procedures need to be made or further investment is required, these decisions are taken quickly and efficiently. As a top tier Control of Major Accident Hazards (COMAH) site T PP quite rightly receives a lot of attention from the Health and Safety Executive, which makes between six and eight visits to the plant per year.”

When the credit crunch and recession took hold a few years ago TGPP witnessed a drop in activity, with smaller companies operating in the North Sea particularly affected by challenges securing funding to progress their developments. However, as Andy emphasises, despite recent unwelcome upstream tax changes, TGPP is looking forward to the next few years with confidence: “We are in the process of making significant investments in the plant and are looking forward to processing significant new gas flows coming from the ConocoPhillips operated Jasmine field as well as the Breagh project that we have mentioned, both of which are due onstream in 2012. Needless to say TGPP wouldn’t be investing this amount of capital if we didn’t have strong confidence in the future prospects of the North Sea and the industry as a whole.”

“If you take a step back and ponder the question of whether or not the UK will still require gas in the years to come, the answer is overwhelmingly yes. In addition to an ongoing role in most homes in the UK for heating and cooking for many years to come, gas is the cleanest fossil fuel for generating power. Therefore, as many old coal and nuclear power plants close gas will play an even greater role in powering the UK’s economy. Then, as the UK and Europe continue to work together towards building a lower carbon economy, gas power stations will have a crucial role in providing back-up generation to intermittent renewable power such as wind. This in turn creates a scenario where we see gas having a prominent role in the UK’s energy mix for the next 50 years and beyond, which in turn we expect will lead the UK’s remaining gas resources to be developed alongside gas imports by both pipeline and ship. So as gas has a great future, TGPP finds itself well placed to capitalise on the next wave of developments to c me from the Central North Sea and the greater Breagh area.”