Back to Profile Gallery > Thermtech AS

Conducting operations from its head office in Paradis, Norway, ten minutes from Bergen, Thermtech is the technology owner of the patented Thermomechanical Cuttings Cleaner (TCC) process used to treat the oily waste produced during drilling, production and refinery activities.

Based on a completely different principle than that of other thermal technologies, the TCC converts kinetic energy to thermal energy by creating friction in the waste. A drive unit sets a series of 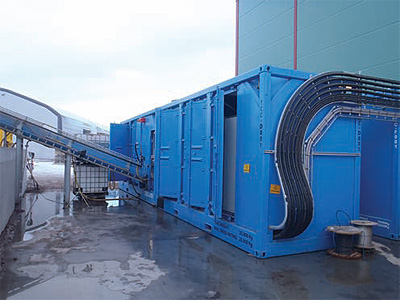 shaft mounted hammer arms in motion inside a barrel shaped process chamber where the solid particles are forced towards the inner wall; there the kinetic energy from the rotating arms will be transformed to heat by friction. The unit can run continuously, automatically controlled by an advanced PLC system, while the hammering motions constantly create frictional heat. As fluids evaporate and leave the chamber, new waste is pumped, whereas the clean solids are discharged through a cell valve.

“Across the world there are numerous oil companies of all sizes that require the use of the TCC technology for the treatment of their waste,” explains Rocco Valentinetti, marketing and sales director of Thermtech. “What the company does is supply this technology, both as complete units to its customers and as manufacturing licenses to its license holders, the industry’s leading service providers, which in turn provide services to the exploration and production companies. From a sales and marketing point of view, it is Thermtech’s objective to raise awareness of its TCC process and the benefits it brings to the end user.”

As Rocco goes on to highlight, the most important property of the TCC process is its ability to recover every material found within the waste itself, while retaining the same qualities possessed by the original components: “What this means is that at the end of the treatment process, the oil can be re-used and the clean solids can be used in different applications, land filled or discharged to sea. With all the elements recovered to be reused with their chemical and physical characteristics still in place, the TCC process aims to completely eliminate the concept of waste. This links back to the heart of Thermtech’s mission, which is to create commercial benefits for its customers, which in turn results in keeping the environment clean and healthy.”

Despite the unquestionable benefits that come from utilising Thermtech’s technology, there are sadly still areas of the world where local environmental regulations do not come close to matching the strict regulations that exist in places like the North Sea, the Caspian and the Arctic. However, the reputation of the TCC process is so strong that what Thermtech often finds is that many oil 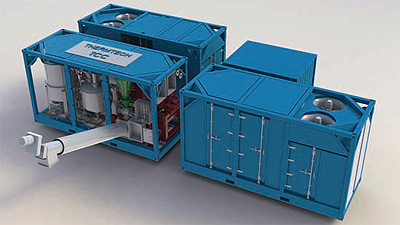 companies operating in areas of lax regulation have in fact still adopted its technology, not just for their own commercial advantage, but to also reinforce their reputation and emphasize their green credentials.

Even with some parts of the world still lagging behind others, the rapid improvements that governments have made to environmental regulations in much of the developed world has contributed significantly to the sharp growth experienced by the company in the last three years. As environmental awareness continues to increase and grow so too must Thermtech, and central to its ability to do this is its engineers. “Each and every working day, Thermtech’s engineers are using their skills and talent to create something new and something more efficient,” Rocco states. “One of the company’s more recent developments has been the creation of a compact, mobile waste treatment unit. The idea behind this undertaking is to create a solution where, instead of transporting waste to the location of the unit for treatment, a mobile unit is transported to the waste. Aside from the obvious logistical savings such a mobile unit can bring, its use can also make the whole process much safer by reducing waste movement, which in itself is a dangerous, unhealthy and environmentally negative solution. Able to be transported via trailers, supply boats and cranes, this is a very compact unit that still offers the same technological advances, capacities and parameters that have made the TCC process so successful.”

As of February 2012, 43 TCC based units, designed and build by Thermtech and by its license holders, can be found in operation across the globe, located on land, platforms and rigs both onshore and offshore. Nevertheless, the company has never been one to not have an eye fixed firmly on its future: “Using the same reliable, efficient, proven technology, Thermtech will continue to develop and bring to market new applications,” Rocco enthuses. “These applications are also now being tested to handle different forms of waste, a move that could ultimately allow the company to move into new market sectors.

“At the same time as these technological advancements are being made, Thermtech continues to examine the possibility of moving into new geographical markets, one of which is Australia, where the oil industry is rapidly establishing itself across the country. This is what the immediate future holds for Thermtech and, as you can imagine, it makes for a very exciting time for all concerned.”