Back to Profile Gallery > Tideland Signal

With over 55 years of industry leading products and a knack for introducing globally recognised ‘firsts’ within the aid to navigation (AtoN) market, it is hardly surprising that Tideland Signal has garnered a reputation as a world-class partner within the oil and gas sector and beyond.

Founded in 1954 the company has continued to grow, expanding its business to operate on a truly global level. Currently Tideland Signal is headquartered in Houston, Texas with offices located in Canada, Singapore, China, the United Arab Emirates and the United Kingdom. As part of its business strategy the company operates divisions dedicated to AtoN services in the Middle East, offshore oil and within gas exploration in the Gulf of Mexico as well as facilities for buoy construction in Canada, Asia, South America, the United Kingdom, Italy and the Middle East.

Marine aids to navigation are at the core of the company’s business and are an area with far reaching applications, as executive vice president Paul Burford elaborates: “The kind of service we provide is essentially that if you’re sailing a ship we provide all the things that you would see from the vessel that stop you from running into rocks and guide you home safely. So it’s solutions like lighthouse beacons, fairway buoys and jetty lights that you would find at harbour entrances.” Currently Tideland Signal’s operation installations, offshore and wind farms. Eacharea comes with its own unique requirements and challenges that potential suppliers need to be aware of, as Paul details: “Port and harbour equipment is usually for general marine use and tends to be fairly rugged to meet the challengeof the harsh marine environment. Within theoffshore energy market there is a much more of a technical requirement because we areproviding equipment in an environment where gases are present, so our equipment cannot give off a spark or have hot surfaces otherwise there is a risk of explosion, the results of which can be catastrophic. Finally, the offshore wind farm sector rather falls roughly in between the two. It does not carry the same risk as oil and gas installations but it is offshore, so it has all the challenges of operating on a remote structure in unforgiving conditions.”

The company’s product portfolio is as extensive as its global reach. It is able to providefirst-class products including lanterns, buoys,radio aids, power sources, helideck systems andmany others. Within the market Tideland Signalhas pioneered a host of leading technologiessince the 1960s including the world’s firsttransistorised, automatic lamp changer that wasintroduced in 1965. Other innovations include the first Microsoft Windows based AtoN satellitemonitoring system (1991), production of the lowest power Racon unit, the System 6 (2002) and the first 30 degree vertical divergence LED lantern (2011). During the 1990’s Tideland Signal was one of the first companies to introduce LED’s to the AtoN market, which has been an innovation that has gained so much traction that LED lights now almost entirely dominate the sector. 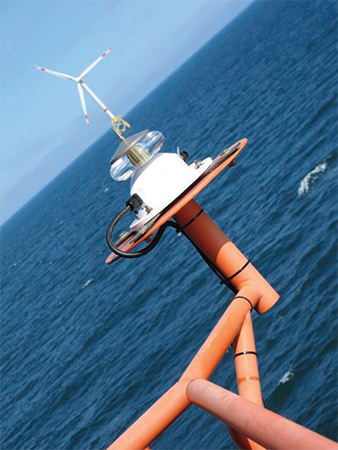 A major differentiating factor for Tideland Signal is in its ability to provide turnkey solutions in a niche market where most operators are focused on only part of the full package. It offers the full range of products, engineers to install and maintain them and large solar OV arrays to power them. A further major strength for the company is in its years of experience within the market, allowing it to anticipate its customers needs in an expert and professional manner. “We pride ourselves on our customer service,” Paul exclaims. “We’re not a company that sells consumables at the cheapest possible price, we offer full solutions to our clients and we value their custom. We want them to come back to us time and time again, so it’s about forming relationships with them. It’s a specialist area and often our customers depend on us to know what they need.

“Rather than the client having to have the expertise in-house, they can rely on Tideland to have the knowledge of industry requirements and regulations. So when it comes to deciding which systems they will need they don’t even need to know the details of their requirement; our customers can rely on us to be able to tell them.”

At present Tideland is active in almost every country in the world that has a coastline or inland sea, offering service contracts to some of the oil and gas sector’s leading operators. It has recently won a contract with Technip for 20 sets of its HeliLED status beacons including the solar power units to operate them, for a project in the Middle East. Another of its successes of which it is proud is the solar PV system used to power GUPCO’s Hilal B platform in Egypt. Tideland worked with the engineering company ENPPI to design, deliver and commission a 35kW system that is the only source of power on the platform

The company can also boast a rich history serving the North Sea market as Paul explains: “We have been supplying North Sea platforms since the industry began; we have worked with hundreds of platforms in the area. A lot of those early systems we put out in the 1970’s are still working so operators are now upgrading them. This is partly because within the North Sea they did not expect to be recovering oil by now, but with advanced exploitation techniques operators are still able to get product out of the ground meaning they are prolonging the life of the oil rigs.”