Back to Profile Gallery > Titanium Builders and Development 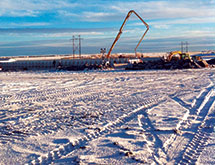 Oil and gas exploration activity in Watford City, N.D., and its neighboring communities has put the region in the national spotlight. Many of the developers and builders hoping to be a part of the Bakken Shale building boom may not quite be ready for what they find there, however.

“We can take you around to places in Watford City that have signs saying ‘coming Fall 2013’ that are later replaced with ‘coming 2014 or 2015’ or so on,” says Todd Rothrock, a co-owner of Watford City-based Titanium Builders and Development. “This is not an easy place to build, and I think a lot of the big national companies who come here to develop or build have the attitude that since they’re big companies from large cities, they’re going to come in and ‘show the country bumpkins how it’s done,’ and that doesn’t bode well for them.”

Founded in 2006 by Rothrock and Jason Vedadi, Titanium has worked exclusively in the region since 2012, when both founders/owners moved there permanently. The two initially worked on residential and commercial developments in small to mid-size markets in Washington state and Idaho before focusing on the Bakken region. “We had never seen opportunities like this previously,” Vedadi says of their decision to move to Watford City.

By living and working locally, Titanium is able to understand local processes and build relationships with area officials. As an example, the company established a close relationship with Watford City’s sole building inspector, who is responsible for performing all plan reviews and inspections. “Our local connections have given us a degree of favor as well as the ability to find out what residents and municipalities want to see.” Rothrock says. “This allows us to get things done and push through obstacles that would make other companies pull up stakes and go home. When we say we’re going to build something, we do it.”

A Full Slate
Titanium’s first significant project in the Bakken Shale region started in 2012, when the company began developing and building a temporary workforce housing project in Arnegard, N.D. The project, known as Arnegard Lodge, is permitted to house 1,400 prefabricated units, 208 of which are in place.

The company in May 2013 began development and construction work on Hunter’s Run, a 375-acre master-planned community located on former wheat fields in Watford City that includes permanent single-family housing as well as multi-family residential components and industrial and commercial developments.

Titanium Builders is involved in several Hunter’s Run-related projects as either a developer/owner or contractor. Several of the parcels of the site have been sold to other developers who are retaining Titanium as a contractor. The company also is performing all of the civil work related to the project, including building roads and sidewalks.

+ Auburn Ridge at Hunter’s Run, a 154-unit apartment complex owned by developer Hegg Companies of Sioux Falls, S.D. Titanium is serving as the general contractor.
+ The Glen, a 180-unit multifamily and mixed-use project. Titanium is the civil contractor on the project, which is owned and developed by Feinberg Properties of New York City.
+ Silver Springs, a 30-unit townhouse project owned by Vedadi along with local businessman Pat Murphy and developer Gary Pinkston.
+ A 52-home single-family subdivision owned by American Landmark Group, based out of Colorado.
+ The Fairways, a 180-unit multifamily project also owned by Vedadi, Murphy and Pinkston; and
+ Hillside Apartments, a 105-unit apartment complex owned by Bakken Communities and Vedadi.

In addition to the residential projects, all of which are either completed or under construction, Titanium is also building a gas station for Sweet Crude, a restaurant and a hotel in the Hunter’s Run area and four industrial buildings in an industrial park that is currently under development.