“TOMOE was established in 1953 in Osaka Japan with a single-minded commitment to research and development,” says Nick Robertson, product manager for TOMOE Valve.

“From the offset the company was quick to seize the lead in butterfly valve technology, a lead that saw the TOMOE valve range develop and flourish in home markets and throughout the world. What this means is that today, as in 1953, the name TOMOE can be found on only the finest, broadest and most reliable range of butterfly valves available.”

TOMOE products can be found operating in a wide range of industries worldwide including oil and gas, petrochemical, marine, water treatment, vehicle manufacture and power generation. Its dedication to developing products that satisfy the demands of process systems has earned TOMOE a reputation as a leading global supplier of valves and actuators.

The unique features of TOMOE’s range of butterfly valves set them apart from other units available within the industry, and it is because of this that the company is often called upon to produce complete customised solutions for clients. This is clearly a massively important area of the business and one that consists of several stages that result in the manufacturing of the best product possible: “Typically the company will first receive an enquiry from a client and this is forwarded to the technical department for review,” explains Nick. “TOMOE then goes back to the customer with a list of questions to get a clear understanding of what they wish to achieve from the finished product.

“In most cases it is not unusual for a client to be focused on a particular solution, and once an agreement has been made on a specification, design work and the pricing of materials can begin. Throughout the project, face-to-face meetings are encouraged to review proceedings and it is these meetings that lead to the building of a close working relationship with the client, one that often leads to future projects being agreed.” 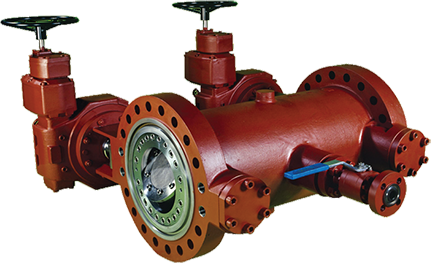 It is the ability of the company to take a clients’ seemingly unsolvable problem and come back with a valve that not only deals with the issue, but also provides long term cost savings: “There is little difference in the products offered by the various global valve manufacturers, so it is particularly important to show prospective clients what added value TOMOE’s valves can offer, a task that in itself is far from easy and is one of the many reasons TOMOE Valve places importance on face-to-face meetings,” Nick reveals.

At present the company is working to put real emphasis on its higher pressure valves, in particular its range of double isolation valves. Providing guaranteed isolation on critical applications, these valves provide multiple working benefits, while eliminating the disadvantages that are commonly associated with gate or ball valve designs, specifically size, weight and cost, whilst ensuring repeatable, verifiable isolation: “There is most definitely an increased focus on health and safety and minimising plant downtime, therefore the company is very keen to showcase this flagship product,” Nick says enthusiastically. “These valves have already been demonstrated to a variety of clients, who have been suitably impressed by the benefits and cost savings they bring, and this is something TOMOE aims to do more of in the months to come.

“These double isolation valves have secured TOMOE Valves’ biggest project to date in 2011. In conjunction with ADMA OPCO and NPCC in the Middle East, this order is for valves ranging from six inches up to 20 inches and will be used in the Zakum Central Super Complex de-mothballing project, with the first batch of valves scheduled for delivery in July 2011.”

As previously stated, TOMOE was founded on the back of a shared belief in the importance of research and development, but as Nick states, though this is an important feature of any business, due to the strict nature of industry regulations, and the nature of the products themselves, it isn’t easy to make groundbreaking design changes: “The key fact is that research and development is not simply about making innovative changes or inventing radical designs, it is just as much about reviewing existing products and processes in order to make improvements. In the past year TOMOE has taken various staff from areas of the business including sales, engineering, purchasing and production, and created a cross functional team. Since forming, this team has managed to make considerable cost savings on materials and improved the company’s internal production processes. This in turn has helped make the company become more competitive within the marketplace.”

Despite the fragmented nature of the economic climate during the last three-to-five years, TOMOE Valve’s year-on-year turnover has remained fairly constant: “What we have noticed recently is a slight increase in demand, which is coming as a result of end users realising the importance of supply chain security and quality, both of which are standard for UK manufacturers. Several years ago there was an influx of low cost valve manufacturers and this tempted some clients away. Unfortunately for those clients they soon realised the truth is that these low cost valves actually end up costing the client more over the life of the product,” Nick continues.

As TOMOE Valve continues to focus on its key markets, Nick is quick to highlight the fact that the company has enough knowledge of the industry to build on its past success: “Contrary to popular belief, growth does not always equal increased profits, and it is because of this that the company must remain realistic in its plans for the future. This industry traditionally suffers from peaks and troughs in demand and as such growth needs to be controlled to ensure the level of business is both profitable and sustainable.”

These are clearly lessons Nick and the company have learnt over time, and this pragmatic approach to business is just one of the many reasons TOMOE Valve has maintained a leading presence within the oil and gas industry for nearly six decades.