Where integration is key

One of the seven, so-called, ‘Supermajor’ oil and gas companies in the world, Total is a globally recognised name in the oil & gas industry, with businesses covering the entire chain, from crude oil and natural gas exploration and production, to low carbon power generation, refining, petroleum product marketing and product trading and a major player in renewable energies. Among its 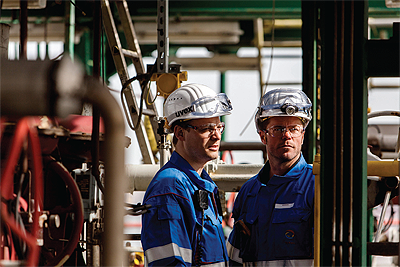 Strategically located in the city’s port area, in the Antwerp-Rotterdam-Amsterdam (ARA) hub, the complex produces a range of petroleum products, including heavy fuel oil, gasoline, LPG, diesel and jet fuel, base chemicals and aromatic hydrocarbons, some of which are used to make high-density polyethylene. The site comprises Europe’s third-largest refinery – which processes approximately 338,000 barrels of oil per day – a petrochemical plant, and a facility that produces polymers, with a capacity of 1.1 million tonnes per year of ethylene.

“The refinery itself started in 1951, initially on a small scale, producing around 30,000 barrels of oil per day,” begins Jacques Beuckelaers, Total Antwerp Refinery’s General Manager. “What followed in the subsequent decades were several waves of investment that helped the refinery to achieve a number of significant milestones, including the construction of its first and largest out of two ethylene plants in the middle of the refinery in the 1990s, in order to maximise the facility’s synergies between its refining and petrochemicals activities. Other important investments throughout the last several decades have included the replacement of semi-regen reformers by a new catalytic reformer unit with continuous regeneration in the early 1990s, the building of an atmospheric residue desulfurization (ARDS) unit in 1994, and the construction of a new aromatic unit in 1998.”

Jacques is familiar with the industry, and with Total itself, as he has been working in the business for over 36 years. He began his career as a young engineer, has held a variety of positions and experienced living abroad at a number of key locations, including Leuna Refinery in Germany, Normandy platform in France, and Lindsey Oil Refinery in the UK. Today, he runs Total Antwerp, where his first goal includes leading 1700 employees – as well as many contractor-employed colleagues – on a growth curve that is defined by strong leadership, teamwork, high safety and reliability standards, and operational excellence.

“As you can imagine, the larger the size of an asset, the bigger the challenges and complexities are when it comes to operating it successfully”, explains Jacques. “We have the chance to benefit from Belgium’s excellent education system, where flexibility, agility and dynamism is part of people’s DNA. The role that people play is a key ingredient to our success, especially within this competitive market. We work diligently to create an atmosphere of good communication and trust, in which our people can thrive.”

Billion euro investment
Speaking about Jacques, it is also easy to notice his enthusiasm for the large investment programs that have been established over the last five years. He feels that those investments have edified Total Antwerp Refinery and Olefins as the best integrated platform in Europe. Arguably, the most eye catching of these programs was announced in 2013, when Total took the decision to invest more than €1 billion to upgrade the complex. The objective of this upgrade was to respond to the market demand for more light products that would meet the strictest environmental standards, to make the complex more flexible in order to use the most cost-effective feedstocks available, and further to increase the already strong synergies between refining and petrochemicals. 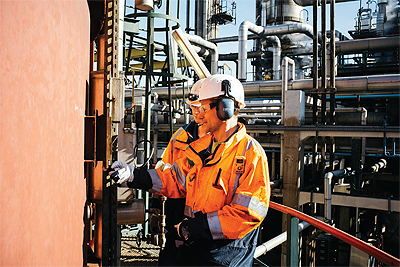 “What began in 2013 as a series ofstudies and engineering concepts, was inaugurated in November 2017, and with itthe landscape of the refinery has transformeddramatically,” states Jacques. “The upgrade consisted of three projects. First, the OPTARA (Optimisation of the ARA area) Project, involved the revamping of our ARDS (Atmospheric Residue DeSulfurization) unit, including the expansion in capacity of one of our trains and converting the other into a mild hydrocracker. At the same time, the ROG (Refinery Off-Gas) Project saw the construction of a unit to recover gases produced by the refinery in order to process those as a feedstock for petrochemicals, with the final purpose of replacing naphtha. Lastly, with the Ethane Project, we revamped one of the two steam crackers, and adapted our logistics to import 200,000 tonnes of ethane per year. This project also allows the steam cracker to run on ethane, butane or naphtha, which means that advantaged feedstocks will account for over 50 per cent of total supply.”

Amazing team
While the need to achieve consistent operational excellence and good utilizationpercentages represents the priority goals forJacques and for all of the women and men ofthe Antwerp platform, he sees the issues ofenergy efficiency and sustainability becoming even more important in the longer term. Assuch, the refinery will have to continue toevolve. “We are working around the clockto improve our energy efficiency levels by atleast one per cent per year,” he says. “We also want to play our part in future projects that will involve the use of innovative technology to capture carbon dioxide emissions in a technically economic and efficient way.

“The refinery and petrochemical industry as a whole has an extensive history of tackling and overcoming various challengesthrough the years, and with the amazing team of people we have around us here at Total Antwerp Refinery we don’t see any reason why we couldn’t develop further strategies that will lay the foundations for the nextdecades of our operations. Like any other business, we cannot afford to stand still, so we will ensure that we will remain on the front foot, and will stay agile and dynamicenough to face down challenges such as climate change, while developing products that our customers need and expect us to deliver.”