Producing around seven million tonnes of crude oil per year from its vast site in North Lincolnshire, Total Lindsey Oil Refinery is one of the large producers of the commodity in the UK and a hugely important actor within the energy industry. Owned by Total since 1999, and having celebrated its 50th year of activity in 2018, the refinery has spent the better part of the last two decades improving its capability to produce ultra-low-sulphur fuels in order to become a cleaner and more efficient operation. As recently as 2016, it successfully transformed from dual crude units to a 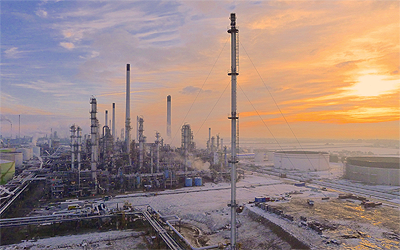 single stream as part of a major adaptation of the site.

Speaking with the refinery’s General Manager, Jean-Marc Durand, in December 2019, Energy, Oil & Gas quickly learned that the previous 12 months had been a particularly successful and exciting time for the refinery. “First and foremost, for us as an operation, I am delighted to say that we are celebrating another full year without a single lost time accident on site,” he begins. “This equates to between 2.3 million and 2.4 million working hours, and is a fantastic achievement, made all the more impressive by the fact that at certain peak periods over the year we saw up to an additional 1500 extra people on site.”

Turnaround results
The reason behind the above-mentioned increase in resource is the fact that 2019 saw Total Lindsey Oil Refinery undergo its largest ever turnaround and inspection event bringing significant investment for the site. “In addition to being the largest turnaround in our history, it also marked the first time that we completely shut down the entire refinery for any period of time,” Jean-Marc continues. “With the ongoing need to serve our customers during this time, this proved to be quite the unique challenge, albeit one that we were able to meet by a combination of ensuring that we began the turnaround with full product stocks and by importing some products. The result of these efforts was that not a single one of the refinery’s clients was negatively impacted during the turnaround.”

Key outcomes of the turnaround included improving the robustness of the overall refinery operation – so that it is able to refine less product yet produce better results – and further lowering the facility’s break-even point. “One of our prime areas of focus was on upgrading and improving the refinery’s fluid catalytic cracking (FCC) unit, which included the installation of a 250-tonne FCC regenerator head, in order to increase conversion and the quality of product,” Jean- Marc explains. “We have worked incredibly hard in recent years to increase our conversion rates of crude oil, 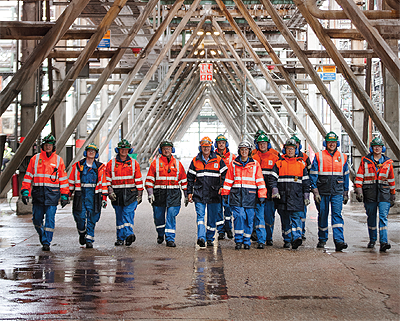 meaning that we are now refining less in terms of the quantity of crude but finishing with a better-quality end product. This really speaks to our desire to ensure that every drop of crude that enters the refinery leaves as a much more valuable commodity.”

Alongside the turnaround event itself, the refinery also has a number of important projects and investments in progress. One large example is the ongoing modification of the facility’s HDS-3 hydrodesulphurisation unit, which forms a key part of the Vacuum Gas Oil (VGO) project. This $25 million undertaking represents another step along the way to the refinery producing ever cleaner, lighter fuels of even higher quality. At time of writing, work on the HDS-3 unit was expected to commence before the end of 2019, with completion expected before the turn of 2021.

New phase
Those that recall our previous feature on Total Lindsey Oil Refinery will likely remember that excitement with which Jean-Marc discussed its Ambition Plan, which set out the refinery’s vision for the five years from 2018. Developed alongside the whole of the refinery’s workforce, it is based around the five pillars of Safety, Availability, People, Cost and Valorisation. Now, almost half way into said plan, Jean-Marc is equally enthusiastic to talk about the progress made in achieving the goals the business has set itself.

“I think it is fair to say that we are well and truly on track to deliver upon the targets that we set ourselves back in 2018, which include being the safest place to work, to be the most available plant compared to our peers, prioritising our investment in our future and increasing profitability,” he exclaims. “As a large organisation, it is vitally important that we have a strategy in place that helps everybody to understand how critical a role they play in the operation and performance of the refinery, and our Ambition Plan helps to ensure that everyone connected to Total Lindsey Oil Refinery is working in the same direction.”

Asked about where he would like to see refinery operations in a year from now – at the end of 2020 – Jean-Marc knows exactly what the number one priority needs to be. “More than anything, I hope that this time next year we will be celebrating two years of being accident free, which would be a great achievement,” he adds. “At the same time, we want to ensure that the running of the refinery remains reliable and that we continue to serve our clients in the best way possible. Last, but by no means least, I would expect us to be at a stage where we have completed – or are about to complete – our work on our HDS-3 unit, which will usher in a new phase of operations for the refinery.”