Selected by Shah Deniz Consortium as the preferred transportation option for natural gas volumes from the Shah Deniz II field to Europe in June 2013, the Trans Adriatic Pipeline (TAP) is a major project that represents the European leg of the Southern Gas Corridor. The project was previously covered by Energy, Oil & Gas in January 2016, during which time the project was in its implementation phase, with all of the required engineering procurement and construction (EPC) service contracts expected to be awarded by early 2016. The project has since progressed well into 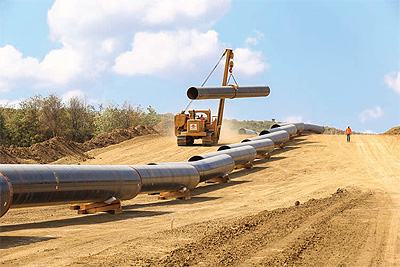 its construction phase and once completed will transport ten billion cubic metres of natural gas per year (bcm/a) from a new source of gas to Europe. The 878 km long pipeline will connect with the Trans Anatolian Pipeline (TANAP) at the Turkish-Greek border at Kipoi, cross Greece and Albania and the Adriatic Sea, before coming ashore in Southern Italy.

“I am pleased to report that the TAP project has registered very good progress since January 2016 and the pipeline is now well into its construction phase, with over ten million safe man hours worked towards the completion of the project,” says Managing Director Ian Bradshaw. “As of early April 2017, we have graded and cleared more than 45 per cent of our route across Greece and Albania (approximately 360 km out of 765 km) and welded over 30 per cent of the required steel line pipes – 17 per cent of which pipes are already in the ground.”

Indeed, within Greece over 260 km of the project’s intended route has been cleared, while 217 km line pipes have been strung with approximately 184 km of pipeline welded. A further 97 km have been back-filled and approximately 18 km are in the process of being reinstated. Line pipes continue to arrive into Kavala, Thessaloniki and Alexandroupolis and at present circa 65 per cent of the 32,000 line pipes needed to build the 550 km Greek section of the TAP project have been delivered in a relatively short period of time.

The project also continues to run well within Albania, where approximately 98 km of the route has been cleared and graded. Around 84 km of the region’s pipelines have been strung, with 71 km of line welded and approximately 50 km of pipes back-filled. “At the end of 2016 TAP completed the first phase of Albanian road infrastructure rehabilitation, comprising the upgrade of approximately 58 km of access roads, construction of two new bridges and the refurbishment of 40 bridges. This will allow heavy machinery and equipment, including a 60 tonne pipe-bending machine and over 1000 18-metre pipes weighing up to 16 tonnes to access remote areas along the pipeline route safely,” Ian adds. “Following the conclusion of construction activities, these upgraded and new access roads and bridges will have the added benefit of being left for local communities to utilise for decades to come. A second phase of road upgrades, consisting of approximately 120 km is also planned to go into construction and this will be built by Spiecapag as a contractor acting on behalf of TAP. In terms of logistics since April 2016, line pipes continue to arrive at our Durrës main marshalling yard (MMY) via the Durrës port and up to now approximately 85 per cent of the 13,000 line pipes needed to build the 215km Albanian section have been delivered.”

Within Italy the TAP project has been awarded a Single Authorisation permit, which was granted by the country’s Ministry of Economy on 20th May 2015 and the TAP team is currently involved in secondary permitting activities. “Construction operations within Italy began during May 2016 and over the summer of that year TAP teams carried out unexploded ordnance (UXO) clearance and archaeological surveys as well as phytosanitary treatment, which involved spraying of olive trees along TAP’s route in preparation to be moved,” Ian explains. “Several surveys have been 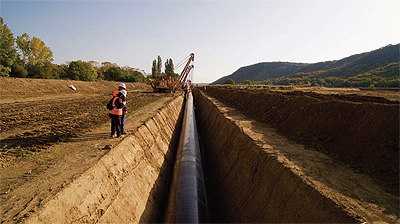 conducted along the San Foca beach throughout early October and in December 2016, while all geological studies for a micro-tunnel construction project have also been concluded.”

The construction of this micro-tunnel further includes the removal, storing and replanting of olive trees across the project’s Italian route. To avoid any impact on the San Foca beach in southern Italy, TAP will build a 1.5km micro-tunnel that represents a state-ofthe- art engineering project that minimises the environmental impact of TAP and renders the pipeline invisible in the operating phase. “To successfully complete the development of the micro-tunnel – at a site approximately 800m inland from the beach – TAP needs to move and store 231 olive trees as a first step, which will later be replanted at the same location,” Ian details. “TAP has now removed all olive trees in the micro-tunnel area. The majority of trees were moved to a nursery where they will be stored and meticulously cared for over the next two years, until they can be replanted at the site – once works have finished.”

The Trans Adriatic Pipeline continues to represent a vast engineering operation that requires expert capabilities and close co-operation between contractors, government bodies and community leaders. Indeed, TAP is committed to investing circa €55 million into supporting the local communities along the route of the pipeline. So far TAP has implemented several social and environmental investment projects and plans to continue to roll out further social projects over the coming months.

In terms of project implementation the team will continue to focus on prioritising safety, while achieving solid progress in the completion of the construction phase. “Safety remains TAP’s number one priority. We have been blessed with superb safety performance so far, with over 10 million man-hours safely worked and over 20 million kms safely driven, and we will do everything in our power to ensure this performance is maintained – especially as we move into more difficult terrain in the mountainous regions of Greece and Albania.”

Ian concludes: “We are looking at considerable progress with regards to our onshore construction. With the continuous support of host Governments and local communities, by the end of 2017 we expect approximately 60 per cent of the route in Greece and Albania (765km in total) to be graded and cleared and around 50 per cent of the project’s welded steel pipes to be in the ground.”