With around 1.2 trillion cubic metres of natural gas in reserve, the Shah Deniz Field in Azerbaijan’s Caspian Sea is one of the largest natural gas reserves in the world. Creating a supply route to serve the ever-growing demands for gas on the European continent from the field is considered to be of great strategic importance for both European and global energy geopolitics. Therefore, in 2012 an Intergovernmental Agreement cementing the bonds between the Republic of Turkey and the Republic of Azerbaijan was signed to secure the build of the Trans-Anatolian Natural Gas Pipeline (TANAP).

Due to stretch 1850km across the length of Turkey from the district of Ardahan Posof on its border with Georgia to Edirne’s Ipsala crossing to Greece, TANAP will be the most critical link of the 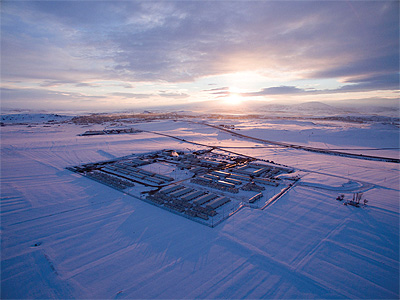 Southern Gas Corridor when it is completed. Construction began in 2015 and it is forecast that 1.28 million tonnes and 160,000 pieces of X70-type steel will be required to complete all pipe and junction materials along what will be Turkey’s longest and the world’s largest diameter gas pipeline at 56 inches from Ardahan to Eskisehir. In addition to the pipeline itself, numerous infrastructure services also have to be built along the route over the coming years. These include two compressor stations, four measuring stations, 12 pigging stations, 49 block valve stations and two off-take stations to supply gas to Turkey’s national natural gas network at Eskisehir and Thrace.

Passing through 20 provinces, 67 districts and 600 villages across Turkey, TANAP is undoubtedly a hugely demanding and significant construction project. However, the importance of the project in the country goes further than just a mammoth engineering task. As a result of economic growth and subsequent increases in energy demands, it is vital for Turkey to boost its natural gas supply by gaining access to new resources.

Thanks to a strong partnership with Azerbaijan, Turkey holds shares in both TANAP and Shah Deniz Gas Field, making it more than just a transit country for the natural gas. Significantly, this means that the Turkish authorities have a say in every link of the value chain between the producer and the final consumer helping it to become a key energy hub in the region. Indeed, the TANAP project is one of the most concrete projects being realised for the purpose of ensuring Turkey’s energy supply security and its ability to meet ever-increasing demands well into the future. In terms of employment alone, it is estimated that the project has provided, and will continue to provide, jobs for over 15,000 people who are either directly or indirectly involved in construction, support services, pipe manufacturing plus a range of other associated sectors. Crucially, the development of TANAP and the Southern Gas Corridor opens up future opportunities for natural gas fields further upstream to be commercialised through Turkey.

However, the challenges of rising population and energy demands are not isolated to Turkey and are a trend noticeable across the rest of the European continent. The link provided by TANAP will at first be a crucial passage allowing resources in Azerbaijan to enter a high consumer market in the West. However, as time goes on other potential suppliers in Central Asia, the Middle East and 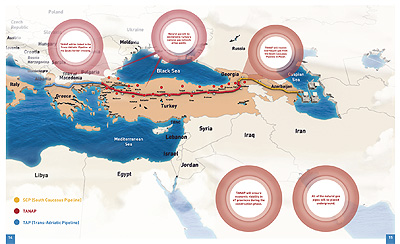 Eastern Mediterranean will be able to gain access to the market through this new gateway.

One key consideration that has underpinned the TANAP project from the start is its environmental impact – especially during its construction phase. In July 2014 the programme’s Environmental and Social Impact Assessment (ESIA) was endorsed in compliance with national legislation as well as international standards.

Ecological studies, to determine impact and the necessary measures to avoid damage, air quality, noise and vibration assessments, to prevent and mitigate the effects of possible gas and dust emissions, water quality and soil quality studies were all undertaken in advance to develop appropriate management plans to create as little environmental impact as possible throughout the project. As too were studies on the landscape, to ensure that soil and vegetation along the pipe’s route could be restored both during and after construction, and archaeological and cultural studies. One hundred and six archaeological sites have been discovered during TANAP’s route selection studies and the cultural assessments were a key part of determining the least disruptive and damaging route.

In terms of its social consideration 146 meetings in 20 provinces were held to inform stakeholders and local communities of the project’s plans and activities and nearly 3000 surveys were made in settlements along the route to ensure that impact on local communities was as small as possible.

The vast scale of work undertaken by the TANAP project is unprecedented for this type of construction challenge in Turkey and the successful completion of it will be vital to the country becoming a major player in Europe’s gas industry. The impact for markets on both sides of Turkey will surely be felt for years to come, and with population rising across the continent, opening up more resources through new corridors will be key to sustaining a consistent energy supply. TANAP’s stated vision is to open up new supply opportunities in order to enhance supply security and diversity across Turkish and European markets, whilst at the same time strengthening the economic co-operation between countries in the supply chain by stimulating investment and fostering gas-to-gas competition. Thanks to a careful and responsible approach to its development, and with construction well on its way, the programme looks set to achieve this when the pipeline becomes operational in 2018.