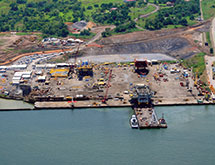 As the only builder of offshore platforms based in Trinidad, Trinidad Offshore Fabricators Unlimited (TOFCO) brings something unique to the oil and gas market in the Caribbean. As General Manager Glenn Earles explains, the company’s unique position makes it a highly sought-after contractor for various oil and gas companies in Trinidad. And although offshore platform construction has slowed down over the last few years, TOFCO has diversified its offerings to maintain a steady level of activity while it has waited for the new construction market to get back on track.

TOFCO has been operating in Trinidad since 2004, and its customer base consists of various energy companies that operate there. Earles says the company’s primary focus since its inception has been on construction of offshore platforms, but in recent years the economic downturn forced the company to put that on the back burner, as there had been no new platforms constructed since 2009. To keep the company afloat, TOFCO turned its attention to brownfield work and maintenance, performing upgrades and related services for its customer base on existing platforms. Earles says the company has found great success in these areas, and has been able to maintain a steady backlog of upgrade and maintenance work as it continues to expand its offerings.

However, the company will not have to stay away from fabrication of offshore platforms any longer. TOFCO has recently started work building its first new platform in nearly five years, and looks forward to completing the project in 2016. With the advantages TOFCO brings to the marketplace and its expansion into new service areas, Earles says the company is confident that it can continue to be a market leader in the Caribbean as the platform construction market recovers.

Local Strength
Perhaps the greatest advantage TOFCO has is that it is based in Trinidad, so it is right there for its customers in the Caribbean. The company’s 37-acre fabrication facility is located on the waterfront along the Gulf of Paria. According to the company, the facility’s 600 feet of bulkhead property and its dock with a depth of 40 feet gives TOFCO the ability to provide clearance for virtually any size of load-out, as well as 24-hour-a-day scheduling capabilities. The company also touts its contribution to the local economy through its homegrown workforce.

“Our facility employs a local workforce, trained by experienced and highly skilled industry professionals,” according to the company. “We have integrated established processes, leading technologies for fabrication and other services, and scheduling management in order to maximize efficiencies, quality control and customer service.”

Because TOFCO is the only contractor based in Trinidad capable of building large offshore platforms, the company has become a go-to source for related services for the Trinidad petroleum industry. Earles says the government encourages the use of locally based contractors working on Trinidadian projects, and this makes TOFCO a valued partner. Prior to TOFCO’s existence, platforms had to be constructed in the United States and then shipped to Trinidad on barges, a time-consuming and costly process. TOFCO’s capabilities allowed the companies operating in Trinidad to have platforms constructed by a local contractor for the first time.

Additionally, Earles says the company benefits from its location at a deepwater port. “That allows any size barge to come here to transport the platforms we construct to their installation sites,” Earles says, adding that this gives TOFCO more flexibility to build large-scale platforms.

Always Changing
The company’s strong capabilities in building new offshore platforms means TOFCO stands out in the Trinidad marketplace, but it also means that the company is ideally positioned to cope with many of the major changes that come with working in the Caribbean. “The biggest challenge for us is the changing criteria for design, and we’re seeing that in the platform contract we just won,” Earles says.

Because Trinidad is in an active seismic area, platforms have to be built to specifications different from in the Gulf of Mexico or many other regions. “The result of this is the platform has heavier members of higher-grade steel than has been seen in any of the platforms in the past,” Earles says, adding that the personnel, experience, and capabilities TOFCO has in place make it more than capable of building under these challenging and changing standards.

The new platform that TOFCO is building will be the largest platform the company has ever constructed, and Earles says the company has expanded its facilities capabilities to allow that type of scale. Nevertheless, the current project is using up every available bit of space the company has, and so Earles says TOFCO is expanding even further over the next few months to help accommodate the anticipated growth in the offshore fabrication market. These plans include a new fabrication building, the first of its kind for TOFCO.

Still Expanding
The expansion TOFCO is experiencing right now is a good sign, Earles says, and is the result of an upturn in new platform construction in the oil and gas market in Trinidad. He says there are more discoveries being announced all the time, and those discoveries will eventually lead to the construction of new offshore platforms.

“It does appear that we’re at the beginning of another upturn in the new construction market,” according to Earles.

On the other side of the business, Earles says, TOFCO is also expanding its capabilities and services in the brownfield arena, and the company’s new fabrication building and addition of electrical and instrumentation capabilities will be a major part of allowing it to do that.

“That will allow us even while the new project is going on to be able to expand our capacity and the services we offer on the brownfield side,” Earles says.