Back to Profile Gallery > Triyards SSY

As the fabrication arm of parent company Ezra Holdings, TRIYARDS began operations in 2005 and has since gained a strong reputation for excellence in the construction of large and sophisticated, technologically advanced, customised offshore support vessels.

Operating out of two strategically located yards within a major shipbuilding cluster along the South China Sea in Vietnam, TRIYARDS SSY in Ho Chi Minh and TRIYARDS SOFEL in Vung Tau, the company offers worldwide cutting-edge engineering, fabrication and ship construction services to both the offshore and marine industries; the group also has an offshore lifting appliance facility, TRIYARDS Houston, which is located in Texas, US.

“TRIYARDS is an engineering and fabrications solutions provider focused on the offshore oil and gas industry,” explains Wong Bheet Huan, chief executive officer of TRIYARDS. “TRIYARDS SOFEL and TRIYARDS SSY are equipped with heavy-lift gantry cranes and deepwater berths, and both yards have the capability to undertake large-scale projects to fabricate different components of fixed platforms, as well as vessel conversion and new offshore vessel and jack-up construction. TRIYARDS Houston, meanwhile, produces equipment such as active heave-compensated offshore cranes, A-frames and winches, which can be installed on the self-elevating units and offshore construction vessels that require stringent standards.”

The group’s current scope of services includes vessel design and construction services, the fabrication and assembly of offshore platforms, jack-ups, steel structures, FPSO topsides and turrets and jacket, overhaul services, modifications and repair of vessels and rigs, as well as the design and fabrication of offshore equipment, such as heavy lift cranes and winches. Since 2007, the group has delivered two PSVs, one AHTS and two oil tankers and has developed a leading reputation as a builder for Self Elevating Units (SEUs), with six delivered and three on its current order book. Analysts have estimated the group’s net order book to be at $324 million as of 28th February 2013.

As the first in the world to construct the newly designed 450-feet SEU series, known as the BH-450, TRIYARDS has cemented its lead in this segment by securing its second order of the same series within the last 12 months. Jointly designed by TRIYARDS and a US based engineering design house, the innovative BH-450 are ABS classified, self-propelled units that boast large deck areas and high capacity cranes, on top of individual accommodation for up to 300 personnel. Standing at over 130 metres in length, the SEUs are capable of working in deep waters up to 90 metres. 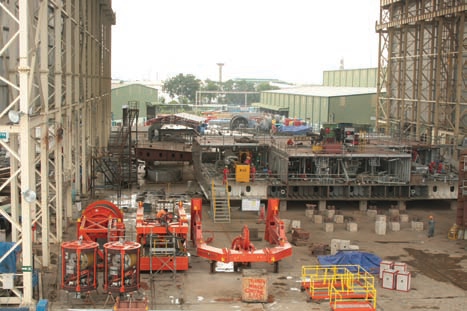 Following the design and construction of the BH-450, TRIYARDS made an announcement in May 2013 that it has become one of only three Singapore yards with the capabilities to design and build its own SEUs and jack-ups, and also introduced the new premium class 400 HPHT (high pressure, high temperature) drilling jack-up rig, the TDU-400. Dedicated to enhancing its engineering expertise, the group has expanded its scope of products on offer to customers with the lighter weight, competitively priced TDU-400, which can withstand up to 100-knot winds and boasts leg lengths of more than 163 metres. The newly designed SEU can operate in water depths of approximately 120 metres and accommodate up to 220 personnel. The design of the unit’s jacking system was developed in collaboration with Siemens, to reduce operational costs and complexity through the utilisation of more pins as opposed to the usual rack chokes on the legs of the vessel.

“Dedicated to providing clients with solutions of the highest quality, TRIYARDS has strong working relationships with some of the world’s top technology suppliers to provide for the equipment and systems used in our vessels,” says Wong. “For example, in our latest design, TRIYARDS is working with Siemens to supply the jacking system for the TDU-400 legs as well as Caterpillar for the supply of our vessel engines.”

Another major contract for TRIYARDS, which is contracted to parent company Ezra Holdings, is the Lewek Constellation, an ice-class ultra-deepwater multi-lay vessel with heavy-lift capabilities. “The Lewek Constellation is capable of operating in water depths exceeding 3000 metres,” enthuses Wong. “It’s stand-out features will include DP3 capability, superior maneuverability, versatility and speed, a 3000 MT heavy-lift crane, comfort class V3 and a clean design, rated NAUT-OSV (A).”

With a focus on the construction of SEUs and high-end sophisticated offshore vessels, TRIYARDS aims to continue its vision of being the preferred engineering, ship construction and fabrications solutions provider to the offshore oil and gas, and marine industries globally. To ensure its strategic goals are successful, the group aims to spend $7 million on a logistics and supply base in Western Australia and move into new product categories, as Wong concludes: “To set TRIYARDS apart from the rest of the yards in the region, the group plans to expand our ship repair capabilities and move into the fabrication of aluminum based vessels such as patrol boats and passenger ferries. The acquisition of a strategically located logistics and supply base in Western Australia will allow us to use the yard as a base to expand our ship repair services beyond Vietnam and will be in line with the group’s strategy to expand its offerings and global presence.”