Back to Profile Gallery > TTS Offshore

Over the years, the company has invested significant resources into the development of better and safer solutions for offshore and subsea load handling in rough and deep waters, and as a result it now offers a comprehensive product range that includes everything from conventional knuckle boom cranes, telescopic boom cranes and straight boom cranes, to highly advanced active heave compensated cranes with lifting capacities up to 400 tonnes, as well as lattice boom cranes for rigs and windmill vessels. These can be applied to a variety of operations, including:

In the area of offshore cranes, TTS has been an active operator in the market since the inception of the offshore industry in the North Sea. The company recognises that the quality and 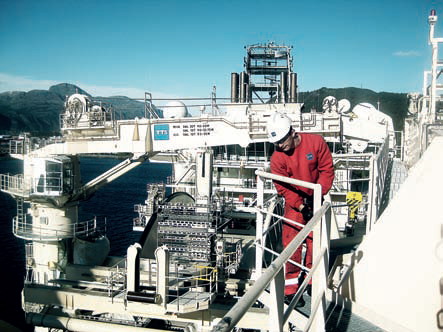 performance of on board cranes is vital for efficient utilisation of an offshore vessel, ensuring trouble-free operation and reducing downtime, and therefore over the years it has researched and developed robust cranes that can withstand the extremes of such a harsh environment.

Safety is further enhanced by the use of active heave compensation, a technology that TTS offers on several of its products. Active heave compensation (AHC) is a technique used on lifting equipment to reduce the influence of waves in offshore operations. The purpose of AHC is to keep a load, held by equipment on a moving vessel, motionless with regard to the seabed or another vessel. TTS OHE’s AHC system is among the most advanced in the market and by compensating up to 99 per cent of the ship movements, based on real time measurements, it is possible to realise very high precision and safe operations at extreme depths.

The company’s range of offshore cranes and access equipment are manufactured to meet customers’ requirements and can be delivered in several configurations. With a large customer base operating in the harsh environment of the North Sea, TTS products are known for their rugged construction, with functionality and safety as key design factors. Proven modularised designs are used to tailor solutions meeting the exacting lifting requirements for each vessel, and at the same time securing reduced time to market with optimised production.

Through the operational lifetime of the equipment, TTS also provides a comprehensive service concept with presence in the important locations for offshore operations. TTS has a worldwide network of branch offices, service stations and agents. It provides after sales services covering the major shipping regions of the world. Services include genuine spare parts, inspections and surveys, rapid response service, remote access, service agreements and training.

The training offering includes training courses for operators and maintenance personnel, each tailored to customers’ specific needs and objectives. TTS’ skilled team of trainers can provide both a practical, theoretical or combine learning experience that covers operation and maintenance of mechanical, hydraulic and electrical systems. Courses can be held wherever it’s most suitable, such as at the office or on the actual crane.

While quality and service are always part of the offering from TTS Offshore, the company also benefits from being part of the TTS Group, with its global reputation for excellence.

The group’s activities primarily involve the design, assembly and testing of equipment while, apart from manufacture of certain key components, production is undertaken by a global network of subcontractors. TTS is one of the top three largest suppliers in its specialised market segments.

The close, flexible working relationships within the group enable the company to assemble complete project teams when expertise in a range of fields is required. The customers that purchase its solutions, such as Hyundai, Kleven Verft, and DSME – to which TTS has under delivery a complete crane package for a drillship, also illustrate this. The company is always keen to work with further renowned organisations, as well as sustain its global position – for example, in 2013 the company signed a milestone contract with the COSCO Qidong Offshore Co., Ltd shipyard in China, which was the result of co-operation between TTS OHE in Norway and TTS Neuenfelder Maschinenfabrik GmbH (NMF) in Germany.

At the end of 2014, the TTS Group further enhanced its presence in China through its subsidiary TTS NMF in Hamburg, Germany; with the creation of a new joint venture the company established for development, design, assembly, production and services for heavy lift marine and offshore cranes.

The new joint venture company formed with South China Marine Machinery, controlled by China State Shipbuilding Corporation (CSSC), will strengthen the economic co-operation and exchange of technical knowledge between the two organisations. With the aim of the Chinese government to focus on localisation in the shipbuilding supply industry, CSSC and TTS’ strategic partnership has reached another milestone.

“I firmly believe that this new joint venture will improve and gain a competitive position in the market. And it will ensure satisfactory economic benefits for each party,” said Björn Andersson, CEO of TTS group ASA.

Services: Lifting and access equipment for offshore vessels and rigs