Back to Profile Gallery > TuuliSaimaa Oy

When the wind blows

Founded during 2009 and based in Lappeenranta, Finland, TuuliSaimaa Oy provides full EPC services to clients operating within the emerging Finnish wind industry. “We operate throughout the entire life cycle of wind farms and are also significantly involved in the finance and equity side of these operations. Our service portfolio includes project management, competitive bidding and financing, land-use planning and authorisation and business stores,” expands TuuliSaimaa CEO, Petteri Laaksonen. “When the company was founded, its main focus was on developing wind farms in Finland. Tariff approvals for wind energy were reached in 2010 and we had been active within the market slightly before that.”

“Due to the increasing demand for wind farm services TuuliSaimaa now operates as an independent company that is able to meet the growing requirement for greater flexibility. The scheme was also designed to distinguish ministry ownership of the parks so that the overall business management and operation of wind farms involving so many partners and customers becomes easier. At the 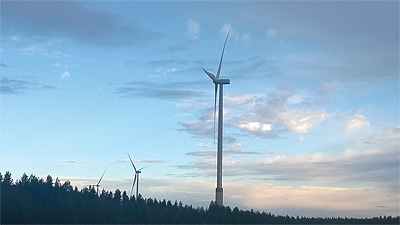 same time we have focused on the preparation of the creation of a comprehensive wind energy service market within Finland,” Petteri explains. “Our experience in wind farms and the sale and purchase of development projects, as well as operating wind farms, has resulted in the creation of a strong co-operation network. We believe that through the service market development of wind farms, separate ownership will create new demand in the market.”

Its early entry into the Finnish wind market has placed TuuliSaimaa at the forefront of the industry’s evolution and established the company as a reliable partner within a proven track record. As previously discussed, the company acts as the operator and manager of the 21 MW TulliMuukko and the 24.3 MW Vartinoja I wind farms and these service contracts also include consultancy services to TuuliTapiola Ky (wind power fund of the LähiTapiola and ELO insurance companies), which represents a 90 per cent asset owner of Muukko and Vartinoja wind farms and owner of the Vartinoja II and Isoneva development projects. TuuliSaimaa further acts as an advisor to LähiTuuli Oy, which operates as the ten per cent owner of the Muukko and Vartinoja windfarms and the owner of the Metsälamminkangas, Kaukkorpi and Lemi, Pyhtää development projects.

The company is also taking an active role in the construction of approximately 27 wind turbines in Vaala nearby Oulujärvi. The sizable vacant area enables large-scale wind park construction, while its location nearby to one of the biggest lakes in Finland offers highly suitable wind conditions. The development of the site is almost complete, with just an Administrative Court decision on one appeal pending for the approval of the general plan. An environmental impact assessment (EIA) has been completed and wind measurements at the site are presently ongoing.

In addition to its activities in supporting the commercial development and management of wind farms, TuuliSaimaa takes a leading role in the development of the wind industry through scientific research and consulting. For example, the company has made investments into the development of wind, solar, energy storage solutions such as E2Gas systems, while engaging in research management services with leading Finnish partners including VTT and the Lappeenranta University of Technology. This has resulted in TuuliSaimaa taking a leading role in research activities such as the management of the ‘New Business arising from the Energy Market’s Strategic Change’ project, as well as continued wind measurements at Siikajoki (TuuliTapiola) and Vaala (LähiTuuli).

Within Finland the future focus of TuuliSaimaa is on further consolidation of the company’s service business in the region as well as the provision of advisory work relating to sales and acquisitions of wind farms including international investment opportunities. In terms of energy production the business will seek to strengthen its presence in the areas of industrial wind, solar and energy storage. In accordance with the targets set by the Paris Convention for 2015, TuuliSaimaa is set to ready itself in the market for wind power as the most cost-effective form of renewable energy at present, while the Finnish market waits for the country’s government to decide on its future renewable strategy.

“Within the Finnish market is it clear that at everybody is waiting for decisions to be made on the political side. We are ready for further operations but cannot go ahead until these discussions are completed,” Petteri concludes. “We are very much an independent business, rather than a traditional energy company meaning that we are not constrained by the operation of old-fashioned energy production plants. During the future I think that wind farms will become more prominent and that more organisations will begin to merge and co-operate. I am sure that we will be able to find partners that will enable us to work together to create bigger entities within the wind energy market.”