Back to Profile Gallery > Ugland Construction AS

Family owned, but globally active, J.J. Ugland is based in the historic shipping town of Grimstad in Norway.

The Group consists of a number of different companies, which between them incorporate a professionally managed and fully integrated ship owning and management enterprise, full-service EPC yard, and offshore operation.

Of these Stavanger-based Ugland Construction AS was incorporated back in 1997, since which time it has co-ordinated the Group’s present marine offshore activities. This includes commercial management of a fleet of flat-top barges in sizes between 10,000 and 16,000 dwt, and a self-propelled heavy lift crane vessel. Before that the Group was home to another company named Ugland Construction Company, which was even more involved in the offshore business through offshore derrick crane vessels, anchor handling tugs, accommodation rigs and the like.

These assets are used in marine transportation and inshore lifting operations for oil and gas companies, offshore contractors, fabrication yards, shipping and engineering companies, and harbour authorities. The company also works closely with the Group EPC yard, AS Nymo, on various projects. With a lifting capacity of600 tonnes, the crane vessel is employed in a range of assignments for the offshore industry, as well as harbour developments, bridge building, salvage and shipbuilding.

This is mainly in the vicinity of the North Sea, but Ugland Construction AS has also had a presence in the Gulf of Mexico for the last 15 years where it maintains a berth place. Furthermore, from time-to-time the company also operates off West Africa.

“For the time being we are operating one crane vessel and 21 cargo barges on behalf of our Group. Ugland Construction AS does not own equipment, we are a managing company, so the vessels are typically owned by Ugland Shipping and other Ugland companies,” explains Øyvind Aasland, managing director.

This includes two brand new barges, which were built at the Dalian Shipyard in China,and delivered recently. The barges are sisters of previously ordered barges from the yard, but have an upgraded deck strength of 30 tonnes per square metre. “Of the 21 vessels we have, 18 are standard 300 by 90 foot barges and these two new builds are the same,” notes Øyvind. “What is different though is that they are fitted with a state-of-the-art built-in ballast water treatment system. This is something new for this tonnage and has come about as a result of the new IMO rules that are being presented to the market regarding environmental impact.” 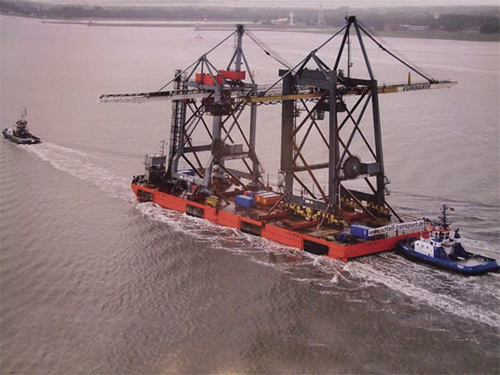 At the end of 2012 Ugland Construction AS also became home to another seven large North Sea barges through the purchase of Viking’s entire barge fleet. Built in Russia throughout1994 and 1999, these Lloyd classed barges are the same dimensions as the two new builds.Also of note are Ugland Construction’s two fully submersible barges, which add a further level of flexibility to the fleet.

Increasingly though Ugland Construction AS is looking at offering more in the way of turnkey project solutions as a whole, as opposed to purely chartering of assets. “We want to tailor marine transportation solutions into a package that meets the client’s needs,” emphasises Tommy Christensen, project manager. “This could be the provision of the whole marine transport supply chain from A to B, or any one element of it, such as parts, storage, sea fastening, engineering, grillage fabrication, and loading. This also reduces the risk for the client by increasing the scope that we can manage on a project as a one-stop-shop package, and therefore removing some of the additional interfaces with other parties.”

To deliver this Ugland Construction AS will work with a number of partners both internally and externally. Within the Group this could be AS Nymo for the fabrication of grillage and sea fastening for the modules, whilst the rest will be third party companies that Ugland Construction AS has long standing relationships with.

Although it’s a new area of focus for the business, project solutions is not unknown to Ugland Construction AS. In the past the company has delivered such services for the Statoil LNG receiving terminal at Melkøya, as part of the Snøhvit Field development. This was throughout 2004 and 2005, but in the years that followed Ugland Construction AS concentrated its efforts into the chartering activities. The company is now looking to pick up the total transportation concept again, and is actively bidding for works to this end.

For larger companies and contractors in particular the ability to secure all their marine transportation requirements from one source is no doubt attractive, and for Ugland Construction AS bringing together its partners to offer such a service opens up new areas for the business to capitalise on. The company isn’t leaving its chartering services behind though as these will continue to make up its largest area of operations, as well as being the assets that will feed into the project solutions side.

“As always this year is focused on chartering of the barges, and the crane vessel which is scheduled for an extensive list of operations including installation of bridges and in-shore lifting. On the barge side we are predominately working in oil and gas but the wind farm market is also an essential part of these elements. We already have a substantial fleet so we don’t foresee any special expansions of equipment going forward. It’s a case now of operating these assets to the optimum through the delivery of these project solutions,” concludes Øyvind