Back to Profile Gallery > US Well Services

A leading provider of high – pressure, hydraulic fracturing services, U.S. Well Services has grown from a small regional company serving the Appalachian Basin to a technology leader in its field. Founded in 2012, the organization doubled in size each of its first three years before deploying its very first electric fleet in 2014 to work for Antero Resources

“About a month into our deal with Antero, they contracted a second electric fleet,” Chief Technology Officer Jared Oehring states. “That was our ninth fleet. During the industry downturn that followed, we continued to grow, and 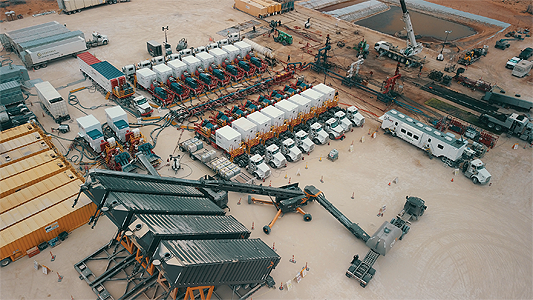 throughout that time, we didn’t cannibalise any of our pumps. We were one of the few fracturing companies that maintained all its horsepower.”

In the subsequent years, U.S. Well Services expanded into Texas, and now boasts locations serving the Eagle Ford play and the Permian Basin, and maintains its corporate headquarters in Houston. In 2019, the company added three more electric fleets, taking its combined total of diesel and electric fleets to 14.

“In January 2020, we deployed our fifth electric fleet for Shell as part of another major contract,” Jared says. “One of the notable things about the Shell fleet is that all the blenders are now electric, whereas beforehand they were electric over hydraulic. We’ve worked with Shell before in the Appalachian division. That’s what gave them confidence in our Clean Fleet technology.”

“A traditional fleet is going to have diesel engines and transmissions. These are all parts that need to be replaced three to five years after the equipment has been built. Clean Fleet, on the other hand, is all electric. It runs using a turbine engine that has a 25-year life and utilises variable frequency drive electric motors that have a 25 to 30-year life,” Jared says, explaining the benefits in more detail. “Not only do the components have longer useful lives than those of conventional frac pumps, but they have fewer moving parts, which means fewer breakdowns and a lower overall cost of ownership. Our very first electric fleet didn’t have to come into the yard for any maintenance for a year and a half, whereas on a diesel fleet, that would never have been possible because you have to do oil changes and engine overhauls. These things are very time consuming and expensive, but we get to free ourselves from all that with the electric fleet.”

Predictive maintenance
Always at the forefront of technology, U.S. Well Services has also built a powerful data system to accompany its Clean Fleet. Developed to reduce Non-Productive Time (NPT) and increase safe stages per day, Frac MD is a predictive maintenance tool comthat uses real-time data collected on how a machine is functioning to determine when repairs are needed.

“Each one of our fleets has over 100 sensors on it, which means we’re being able to combine job data with vibrations and pressure data to help us predict the health of each of our units,” Jared remarks. “In the industry, 75 per cent of diesel fleets are cared for with reactive maintenance or a calendar scheduled maintenance. The problem is reactive maintenance means significant and costly damage has already occurred and with calendar maintenance, you do not capture the full useful life of each component. The issue is that random events, like a rock shot, can dramatically change the useful life of a component. Our Frac MD system allows USWS to use predictive maintenance which prevents costly component failures while ensuring we capture the maximum useful life of each component. ”

“For example, as soon as a rock hits, our sensors detect it and Frac MD can tell us that a pump is in danger of a sever damage if it continues to run. The pump operator can then immediately pull that pump from operations. This allow us to replace a $100 component before it fails and blows through our fluid end causing a total failure and cost $50,000 to $80,000 to replace.” 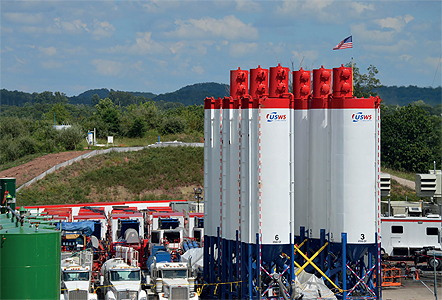 Significant savings
As the long-term deal with Shell suggests, U.S. Well Services’ Clean Fleet package has caught the eye of some of the world’s largest corporations. Independent third party testing has confirmed the significant emissions reductions that the electric fleet offers compared to conventional diesel-powered fleets, but it is not just the environmental advantages that make Clean Fleet an enticing proposition for industry giants.

“Our customers see significant savings comwith Clean Fleet, especially on fuel,” Jared asserts. “They are also very much focused on improving safety and reducing incidents, and the electric fleet really helps with this goal. In our industry, the person that’s most likely to get harmed on the job is someone with one to two years of experience doing reactive maintenance. By having components that need less upkeep, a sophisticated engineering control system like Frac MD, and a focus on predictive maintenance, we are keeping all personnel at the wellsite much safer. In summary, the increased efficiency means less downtime and more money for both us and for our customers.”

After a strong start to the year, U.S. Well Services, like companies across the globe, was forced to take precautionary measures to help reduce the risk of Covid-19 to its workforce. As a result, most of the company’s office personnel have been working from home over the last two months and workers in the field have become familiar with temperature checks and screening questions. Despite the unprecedented upheaval, and the economic uncertainties that have accompanied it, U.S. Well Services has continued to perform. In April, the company signed a new contract to provide electric hydraulic fracturing services for EQT Corporation.

“We had piloted a fleet with them. They were impressed with the performance and signed an agreement that could last up to three years,” Jared reveals. “We are still seeing extremely high levels of interest in comour electric fleet, even in an economic slump such as this. Utilisation rates are everything in a downturn. If you can keep your equipment utilised, then your revenues are going to be higher, you’re going to be able to spread your costs, and you’re going to be able to bear the downturn much easier than somebody who is more leveraged to the spot market.”

Dedicated to technology
Though the company is yet to reach its tenth anniversary, US Well Services is accustomed to receiving widespread recognition for its work. Over the course of its history, the organisation has been named Smart Diagnostics Innovator of the Year and Best Stimulation Service Provider at the Upstream, Exploration & Production Awards, as well as taking home prizes for Excellence in Well Completion, Environmental Stewardship, and New Technology at the Annual Oil & Gas Awards. Jared suggests that a large part of the company’s success can be attributed to the senior management team’s dedication to using technology to fix problems.

“We’re a frac company that develops technology to provide better service,” he declares. “We’re not just another frac company that says, hey, we’re going do the same thing we’ve been doing for 70 years and we’re just going to do it better. We bring technology into this field and use it to offer up better engineered solutions for our customers – technology gives us a strategic advantage in making our operations safer and more efficient because it’s engineered into the equipment from the very beginning. We have a high level of support all the way up to our CEO who is named on our very first electric patent.”

Inspirational leadership
A United States Army veteran, U.S. Well Services’ CEO, Joel Broussard, has played an instrumental role in the company’s ascent. “Joel has an energy and enthusiasm that’s infectious,” Jared proclaims. “It makes you excited to come to work. He keeps telling everybody, we’re fighters, we’re going to make it through this downturn and he really helps you believe in the success of the company. Joel has an amazing track record of success with his previous businesses and he is a proven leader who knows how to invigorate workers all the way down to the front line. He makes everybody feel like they are appreciated; it’s just a pleasure to work for someone like that.”

As of the end of March 2020, US Well Services remains the market leader in electric fracturing, with 12,869 stages completed since the deployment of the company’s first Clean Fleet in 2014. One area of interest for the business going forward is the generation of remote electrical power. The firm currently has a patent pending for its PowerPath technology, a system that provides 13,800 volts of electrical power for remote hydraulic fracturing operations several miles away. Jared and his team believe that this could be the beginning of something much bigger.

“We have a core competency of being able to generate our own power,” he reports. “We do it for our electric fleet day in and day out. We’ve been doing it now for five years. We are constantly evaluating new ways of leveraging this competency to serve a variety customers, not just those operating in the comonshore oil and gas industry.”

As the company grows and adapts, U.S. Well Services remains highly aware of its corporate responsibility and ever-committed to its policy of environmental stewardship. Earlier this year, before Covid-19 regulations were adopted, the organisation instituted a programme at its corporate office enabling members of staff to work from home once a week to help reduce traffic and allow for a better family life. The initiative is just one way in which U.S. Well Services seeks to strike a harmonious approach towards environmental, social, and corporate governance (ESG).

“What we have found at our company is that when you prioritise ESG, you don’t have to choose between being responsible corporate stewards and making money; you can take care of the environment, your employees and our communities while generating attractive financial returns for all of our stakeholders,” Jared claims. “We have adopted a system that lets us achieve both goals simultaneously.”