Moving with the times

Recognising the importance of Ventspils as a key transportation point for various cargoes between the East and West of Europe, the government of the Soviet Union first had the idea of building an oil export facility in Latvia in 1955.

With operations beginning in September 1961, the terminal established its key crude oil pipeline from the Russian oil fields in 1974. With the 1990s came the fall of the Soviet Union and the regaining of independence for the Republic of Latvia, in turn transforming Ventspils Nafta Terminals from a state owned to a privately run company. In 2001 it completed an upgrade that took its storage capacity to its current level: “At first the terminal’s product storage capacity was 200,000 cubic metres, but today that figure is close to 1.2 million cubic metres,” highlights Lars Pantzlaff, general director of Ventspils Nafta Terminals.

“The terminal operates with 105 tanks that range from 5000 to 50,000 cubic metres in size,” continues Vilnis Riekstins, operations director of Ventspils Nafta Terminals. “Pipeline connections are linked to Belorussian and Russian refineries and the terminal operates with four loading berths for tankers, where simultaneous operations can be carried out on four vessels with various grades of petroleum products.”

In 2009 the company set out on a path to provide a more multi-functional service to its customers. Being linked to VTTI, which operates terminals around the globe, the company is constantly exposed to quality business practices and this is what it draws upon when setting its own benchmarks for best practice. This commitment to improvement is not the only major strength of Ventspils Nafta Terminals, as Lars explains: “The terminal’s size is something that makes it very attractive to customers that handle large product volumes. 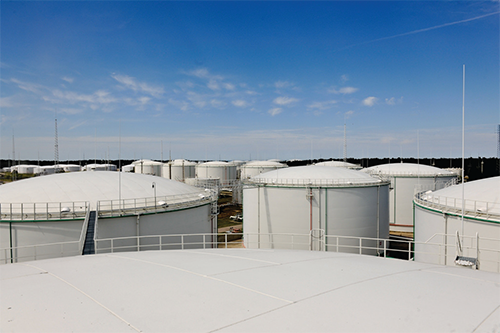 “Alongside this, a strength of the terminal is its connection to railway and pipeline infrastructure and the fact that it operates from an ice free port all year round. Further north more disruptions occur in the winter due to the ice build up and by not having this problem customers here are provided with a better availability of service. In recent years the company has also greatly adopted the idea that change is an inevitable occurrence and that in order to remain at the heart of an ever-changing world it needs to be competitive. To achieve this it takes a concerted effort across the board in terms of making infrastructure upgrades, investing in and establishing new services and maintaining good business practices,” adds Lars.

A perfect example of the investment the company has made is in transforming the 50-year-old terminal into a fully automated system. As of only just over a decade ago the majority of the terminal’s 2000 valves and its network of pumps were still manually operated so this conversion project has been a considerable undertaking in itself. Another recent development for the company was the merging of its three separate control rooms into one, a move that made excellent sense, in that it provides better controls and work flow influences.

September 2011 marks the terminal’s 50th birthday, an event of real significance for the company and, more importantly, the people of the city of Ventspils: “Every birthday is quite an important event here, not just for the terminal, but for the surrounding area,” Lars states. “The company is set within a city of 40,000 inhabitants, so it is a small, close-knit environment where a lot of people have worked at Ventspils Nafta Terminals as their fathers, and perhaps even their grandfathers, did before them. This means the company is very well connected within the community and a by-product of this is that employees take great pride in working for it. This kind of staff loyalty is unique and probably won’t be found in the fast moving world of Western Europe or the US.”

With the business of Ventspils Nafta Terminals intricately linked to the developments within countries that make up the Commonwealth of Independent States, the company has undoubtedly felt the impact of the changing financial market: “The last few years have been quite turbulent and have certainly had an impact on the number of tonnes of product seen passing through the terminal, however there now seems to be much more demand in the industry,” Lars says.

The focus now for the company is primarily to maintain and strengthen its position as the most state-of-the-art transhipment complex within the Baltic region: “The main priority at this time is to finish the upgrading and internal improvement process, something that will ideally be completed within the next five years” Lars enthuses. “While this is ongoing the executive management of the company will be looking at how to further streamline the business, allowing it to reach the efficiency level everyone wants to see.

“The goal for the near future is to have an organisation that from a safety, quality and customer service point of view is the best at what it does in the Baltic region, while also being able to compete with any other terminal situated in Europe.”