Back to Profile Gallery > VERBIO

Based in the town of Zörbig in the German region of Saxony-Anhalt, VERBIO is a leading independent manufacturer and supplier of biofuels throughout its home market, and wider Europe.

Around 800 employees across three sites produce biodiesel, bioethanol and biomethane on an industrial scale, making VERBIO a one-stop shop for all biofuels in current use. These products are then delivered directly to European oil corporations, oil traders, independent filling stations, haulage companies, public utilities, and vehicle fleets.

With biofuels having gained something of a foothold in the energy market, the focus is now on maturing this sector. These green fuels must themselves be able to be produced sustainably, and at an affordable cost level in order to become a real alternative to fossil fuels. Some of the strongest lines of development are in achieving carbon dioxide-efficient biofuels, but also resource-efficient products that can utilise raw materials to the full.

“The strategy behind VERBIO’s bio-refinery is to maximise sustainability and CO2 efficiency in biofuel production,” explains CEO Claus Sauter. “It’s based on a closed loop system and the use of the whole crop to produce biofuels. VERBIO’s bio-refinery is the world’s first industrial scale example of a combined biomethane, bioethanol, and organic fertiliser plant. Owing to the dual exploitation of raw materials, which are exclusively agricultural residues like distillery slop and straw without the use of any foodstuffs, we achieve a particularly efficient low CO2 process. Of the raw materials used over 90 per cent are converted into energy in the form of bioethanol and biomethane, which goes under the product name verbiogas. The remaining inorganic components are returned to the cycle as organic fertiliser, hence enabling a high degree of sustainable agriculture.

“Compared to other manufacturing processes, VERBIO’s bio-refinery extracts more than twice as much energy per hectare of land, and uses 40 per cent less energy, whilst the biofuels produced emit up to 90 per cent less CO2 than fossil fuels. In the future, even more use will be made of agricultural waste such as manure and slurry for biomethane production,” he continues.

In particular, verbiogas is one such solution that addresses the two most important aims of biofuels – to reduce the amount of CO2 emitted by transport and to decrease the dependency on fossil fuels. “With the production of our biofuels ‘made in Germany’, we are always one generation ahead. We are committed to the principles of sustainability and treat natural resources carefully and responsibly. VERBIO is currently the most important producer of biofuels in Europe, which already supplies biomethane as a second generation biofuel and therefore offers a further alternative to biodiesel and bioethanol,” notes Claus. 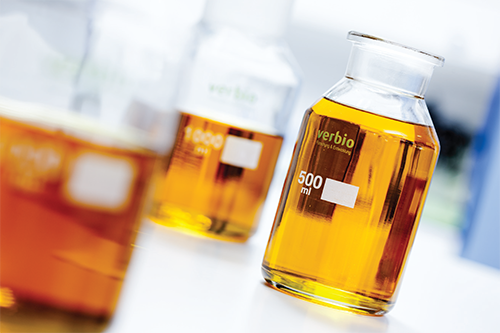 “One of the most important strengths of the biofuel business is its rapid development, which is demonstrated by the introduction of many new technologies that are efficient as well as competitive. A good example is the highly efficiently produced biofuels of VERBIO, with our biodiesel plants and bio-refineries raising the bar in terms of state-of-the-art production. Thanks to our internally developed energy saving production processes and ground-breaking technologies, we significantly exceed the statutory demand to cut CO2 emissions by at least 35 per cent compared to fossil fuels,” he adds.

The importance of biomethane as a biofuel has accelerated considerably in Germany over the past 18 months. It is now estimated that a total of 20 per cent of natural gas in Germany will be replaced by biomethane. As such, VERBIO has expanded its biogas distribution throughout 2012 and now supplies verbiogas biomethane to 125 of the 130 natural gas stations offering 100 per cent biomethane.

Yet, despite the great strides made in the implementation of biofuels in recent years, the uncertainty surrounding legal frameworks is proving something of a stumbling block to further progression. “We continue to see the biofuels movement as a growth market,” explains Claus. “This particularly applies to second generation biofuels. Without the use of biofuel in renewable energies, the energy transition will be up in the air and the mandatory climate targets that are to be reached by 2020 rendered unachievable.

“However, the current market distortions by circumventions of biofuel imports, as well as the discussions about upcoming changes of the regulatory environment complicate a stable business. Despite contrary political objectives, more palm oil than ever before was processed in 2012. The current legal uncertainties concerning the further goals for biofuels in Germany and the EU, and the lack of control mechanisms for upholding sustainability requirements, makes it difficult to implement growth plans. Against this background VERBIO has stopped all investment plans and is now concentrating on optimising its existing business and internal structures to secure ongoing profitability. As part of this we have announced a cost saving programme with estimated returns of five million euros. Once the market development of the biofuels industry and the legal framework becomes more transparent, we will again look at the company’s further development,” he concludes