Back to Profile Gallery > VerdErg Connectors

VerdErg Connectors Ltd is a company destined for meteoric growth.

Since it was last featured in European Oil and Gas Magazine in 2010 its turnover has risen by 300 per cent and similar growth is planned to continue to £100 million per annum by March 2018. To contend with the significant contracts awarded in 2011/12, the company has increased its workforce from around 50 personnel to over 140 in the last 12 months. However, there is more to come. VerdErg, it seems, is placed to become a major force within the oil and gas sector in the coming years.

The company can trace its history back to the late 1970’s as one of the original engineering consultancies in the emerging subsea market. Its founders were originally experts from Vickers Oceanics’ manned submersibles business, who left to create their own company, knowing that advances in robotics and instrumentation would give Remotely Operated Vehicles industry dominance. The company was originally known as FUEL (Furness Underwater Engineering Limited) and gained a respected reputation for developing advanced subsea technologies. In 2002, it was acquired by the Houston-based INTEC Engineering as a springboard for its entry into the European market place. Later that same year the Dutch Heerema Group purchased INTEC, including its ex-FUEL business unit.

By 2005 the ex-FUEL segment of INTEC’s operation was subject to a management buyout and renamed VerdErg; ‘Verd’ is a word with the root meaning green in many European languages and ‘erg’ is a unit of energy. The new name was chosen to be representative of the company’s ongoing philosophy of providing ecological solutions to the energy market. Today, VerdErg’s operations are divided into two distinct areas: VerdErg Connectors, servicing the subsea energy market and VerdErg Renewable Energy developing wave, tidal and river hydropower technology.

The company has enjoyed a longstanding relationship with BP, operating within the environmentally hostile West of Shetland region of the North Sea. Since 1991 VerdErg has provided BP with all of its connection equipment in the Shetlands basin, representing a core of VerdErg’s business. However, in recent years, as VerdErg has grown and developed, it has expanded into new areas and increased its customer base to include several other major operators such as Chevron and ExxonMobil. “Up until 2005 we had been serving one major client, which was BP,” begins managing director Richard Freeman. “Following the management buyout we invested in product development, giving breadth to our product range to be able to appeal to new clients. A major milestone for us was that in 2009 we had shifted from being largely dependent on BP to their projects being only 30 per cent of our turnover.” 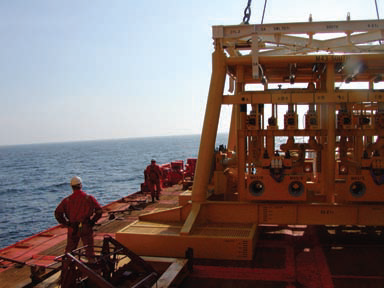 In 2012 the company was awarded a contract that would again change the focus of its business. Reflecting its long-term history with the company, VerdErg was awarded a major contract by BP within its ambitious Quadrant 204 project, West of Shetlands. The contract not only provides immediate activity for VerdErg, but is set to run for the next 20 years with various field developments evolving to carry it forward. However, while involvement with the Quad 204 project will undoubtedly be a major source of activity for VerdErg in the next few years, work for new clients has also been secured as Richard elaborates: “You could be forgiven for thinking that our work is again rather dominated by BP, however we have won another contract with a major operator that is of comparable size that we hope to be able to announce soon. We were also involved in the Angola Block 31 project and are currently bidding for similar work offshore Angola that gives us an exciting prospect for growth there too.”

VerdErg was also awarded a contract with yet another major operator during 2012 to design 20” connectors for offshore Eastern Canada. More recently still, it has been awarded a contract for the supply of a side-by-side, run-to-place rigid horizontal system combined for 8” and 16” connection sizes, this time for one of the industry’s leading main contractors.

The company’s success in maintaining long-term relationships and in attracting new clients can be attributed to the high quality of its product and in the professional approach it takes in its operations. “The connectors we supply are owned by the operator for the entire life of the field, this ties us in to the field throughout its operational lifetime. So we have developed very close relationships with our customers and especially our longer-term clients” comments Richard.

“We join their teams early on, looking at field layout design to make sure the connections can be made and obviously we work in designing and procuring the equipment for them. We aim to have the same relationship going forward with our newer clients and we have engineers embedded within their teams to achieve this. In some ways being a smaller company allows us to be more collaborative than some of the larger companies.”

Moving into the future the company is keen to continue to build on its current strengths and further solidify its reputation, as Richard closes: “There are very few companies that focus solely on connectors. We are currently about the fifth largest out there and we plan to be the third largest within five years; and with our current contracts we are set to do that. We are then keen to grow from 20 per cent to 33 per cent market share, which would put us just behind the major hardware manufacturers. They obviously have a lot of other equipment in their portfolios, whilst we work exclusively in connection systems.”