Back to Profile Gallery > Veresen Inc. 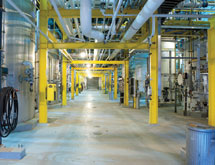 Veresen Inc. closed a deal in February 2012 on a low-risk asset with high-growth potential. The company’s $920 million acquisition of the Hythe/Steeprock Complex, formerly owned by Encana Corp., has ushered it into Canada’s booming Montney Shale Play, the prolific natural gas resources located in British Columbia and Alberta.

Under Encana’s ownership, the complex was used strictly for in-house purposes as part of Encana’s vertical integration as a producer and processor of natural gas. Part of its deal with Veresen included a long-term midstream services agreement under which Encana provides a competitive, long-term, take-or-pay throughput commitment averaging 370 mmcf/d, representing 72 percent of the functional capacity of the Hythe/Steeprock complex. The deal allows Encana, whose resource plays in the Montney shale encompass more than 1 million acres of land and in excess of 500 mmcf/d of natural gas production, to still leverage the capabilities of this plant. However, the plants acquisition by Veresen now opens this complex to other producers in the region, as well.

“Encana essentially operated these as captive assets and were not in the business of attracting third-party volumes,” explains Dorreen Miller, director of investor relations. “This really gives Veresen the opportunity to reach out to the producer community and attract third-party volumes.”

And there is a lot of third-party volume to attract. GLJ Petroleum Consultants, an independent qualified reserved evaluator, estimates total recoverable natural gas in proximity to the complex to stand around 26 trillion cubic feet and in its rosiest outlook foresees regional gas production to increase by approximately 2 billion cubic feet per day over the next 20 years.

“As a relatively low-risk, long-term, fee-for-service investment, the Hythe/Steeprock complex is a cornerstone asset for our independent midstream business,” explains Chris Rousch, vice president of the midstream division.

These assets were extremely attractive to Veresen due to the high level of operational reliability and safety culture inherent at both facilities. Because of this, the company is able to offer very competitive operating costs to the producer community.

Building Diversity
This is Veresen’s second asset in its midstream portfolio. It also has a 42.7 percent ownership interest in the Chicago-based Aux Sable – North America’s largest extraction and fractionation plant. Its midstream assets are just one part of Veresen’s energy infrastructure portfolio, which includes two pipeline systems and several power generation assets focused on the gas-fired and renewable business.

While diversity is a key to Veresen’s corporate strategy, Miller explains that the strategy is not necessarily to look for an equal weighting among its divisions, but to build a portfolio of stable assets.

“From our perspective, we are not necessarily looking for balance between our pipeline, midstream and power business lines,” she says. “We go after opportunities that make the most sense for Veresen and what fits into our stable fee-for-service business model. Right now, midstream is driving our growth and the growth we see in our future.” EMI