Back to Profile Gallery > Volstad Maritime AS

For many businesses a strong history and reputation built around quality and strength of service is a key factor, and this is no different for Volstad Maritime, a privately owned Norwegian company that both owns and operates vessels in seismic exploration and offshore IRM and construction.

Based in the maritime capital of the Norwegian Northwest, Aalesund, for over half a century Volstad has been an international operator of ships that carry out a broad range of activities.

The business has been building vessels since 1952, and through the continued development of various types of ship has evolved its activities to encompass worldwide operation in areas as diverse as fishing vessels for local fishermen and purpose built offshore vessels capable of ROV/DSV operations as well as seismic exploration projects.

In this particular field the company took delivery of its ROV/DSV new build vessel, the Bibby Sapphire, in 2005. This vessel operated on long-term charter with Bibby Offshore Ltd. up to April 2010, when it was then sold to Bibby Offshore. Alongside this vessel Volstad Maritime also charters the Bibby Topaz to Bibby Offshore. Built at Fosen Shipyard and delivered to Volstad in 2007, the Bibby Topaz is a 107 metre long vessel equipped with two diving bells and capable of operating with up to 18 divers at once in depths reaching 300 metres.

Volstad is always looking to expand its operations, and accordingly, at the beginning of 2008 the company took delivery of the Volantis from Fosen Shipyard. At 107 metres long she is the same length as the Bibby Topaz, but is designed to perform as a multi-role subsea support vessel to support the company’s latest trenching developments. The aim of adding Volantis to the fleet was to achieve a new spread of vessels that would include a work-class ROV, the 2100kW UT-1 ‘Ultra Trencher’ and a 2000 tonne lay system. Perfectly demonstrating its offshore capabilities, the Volantis is currently operating successfully under a long-term charter with CTC, which is a subsidiary of Deep Ocean ASA.

Volstad’s fleet also comprises of two state-of-the-art seismic streamer vessels, the Oceanic Endeavour and the Geo Caspian. The former, which is widely recognised as one of the most powerful and high-capacity vessels currently operating in the world, is equipped to tow up to 16 streamers and eight gunstrings. Volstad originally took delivery of the Endeavour in 2008, and the vessel has performed exceptionally in that time, with her capacity to carry 70 crew in very high accommodation standards earning her an excellent reputation within the Volstad Fleet. 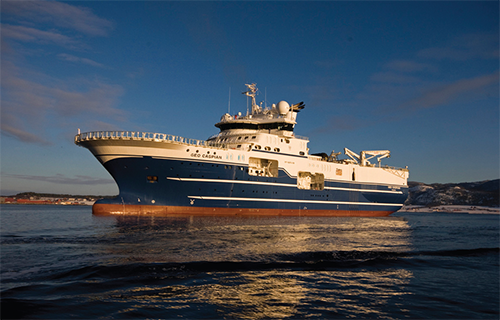 The company’s other seismic streamer vessel, the Geo Caspian, was the latest delivery to Volstad, having been delivered from Fosen Yards in 2010. Again, the ship can tow up to 16 streamers at a length of 8000 meters, and is currently operating on charter for Fugro Geoteam. Specified as DNV 1A1 class, the Geo Caspian has single cabin capacity for 70 crewmembers, and she bring the latest vessel technology to the well-established Volstad fleet.

Of course, Volstad’s capabilities extend beyond the realm of seismic activity, as is demonstrated by the company’s multi-role subsea support vessel, the Deep Cygnus. Another product of Fosen Yards, with which Volstad has a very close working relationship, Deep Cygnus is 122.4 metres long, giving her a crew capacity of 92 and enabling her to carry out a broad range of operations, supporting clients in a multitude of subsea applications.

As is evident, Volstad’s fleet means that the company works in a broad range of fields, with its vessels operating in a number of different regions, and subsequently environmental conditions. Bearing this in mind, the company firmly states that the health and safety of its employees, both on and offshore, is its first priority regardless of the type of operation or project in question. As would be expected, the company complies with all of the latest national and international regulations, as well as all relevant industry standards and guidelines.

The regular additions to Volstad’s fleet over the years demonstrate the company’s dedication to continued growth and expansion. In February 2012 the business signed a contract in excess of 800 million NOK with Bergen Group Fosen to build a large and modern offshore vessel that is scheduled to be delivered in the third quarter of 2013. Designed by Skipsteknisk in Aalesund, the ship will be a large and advanced OCV (Offshore Construction Vessel) of 125 metres length and 25 metres width.

The delivery of this ship, yet to be christened with a name, will add further weight to Volstad’s already impressive operational capabilities. With all of the company’s vessels working on long-term charters for the foreseeable future, and further business due to arrive along with the delivery of its latest unit, the coming years certainly look bright for Volstad.