Back to Profile Gallery > Vopak

Leader of the pack

Established in 1999 following a merger between Van Ommeren and Pakhoed, Vopak has developed a strong tradition for excellent leadership, strategic collaborations and continual expansion through investment.

Today the company is the world’s leading independent tank storage provider, operating 83 terminals in 31 countries spread across all five continents. Having spent the last decade focusing on storage as its core business, the company has divested itself from shipping, distribution and other activities to become a specialist in the storage and handling of liquid chemicals, gases, petroleum products, biofuels and vegoils.

Headquartered in Rotterdam, the Netherlands, Vopak boasts an ever-increasing combined storage capacity of more than 30 million cubic metres across the globe, with terminals strategically located for its large customer base along the major shipping routes. As customers are mainly active in the chemical and oil industry, Vopak stores a diverse range of products that are readily available to a number of industries. Dedicated to customer service, the firm’s ongoing growth stems from total commitment to the success of its clients, with operations based on its core values of loyalty, transparency, commitment to employees and mutual trust.

Marking 400 years of existence in 2016, the company is to further develop its global leadership in tank storage with a continual expansion initiative. Eelco Hoekstra, chief executive officer at Vopak, discusses the company’s developments since it was last featured in European Oil and Gas magazine in January 2013: “In 2013 we have expanded a number of locations and invested in new ports and new tanks; we have also been involved in two divestments, which is all part of our continuous strategic drive to align our terminal network with long term market development.”

He continues: “In March 2013 we inaugurated a large new terminal in Algeciras, Spain, which has 403,000 cubic metres and 22 tanks, predominantly for fuel oil to serve the bunker market there as we have jetties capable of receiving vessels up to 225,000 dwt. We think this is the first truly independent oil storage company in Algeciras, which is beneficial as it can be used by several parties. The bunker market in the Straits of Gibraltar and the Mediterranean Sea is an area we have always been attracted to because of the strategic connections between Europe, the Middle East, West Africa, America and Asia so developing a position there has been on our radar for some time.”

A key transit area, which stands at the crossroads of the world’s main shipping lines, the port of Algeciras is also part of the second biggest European market for bunkering services. Vopak holds an 80 per cent stake in the terminal, with partner Vilma Oil holding the minority share of 20 per cent; it was designed by Vopak and will operate under global Vopak standards. “We are very pleased to have entered Algeciras and have had our first few months of operating there. Right now we are assessing what we want to do at the terminal in preparation for the future,” adds Eelco. 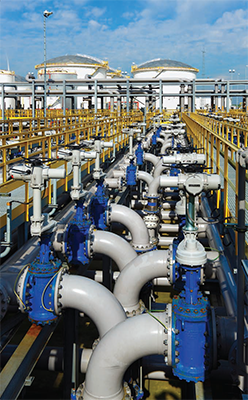 With a long history of developing collaborations that strengthen its service offering and global network, Vopak announced a joint agreement with Magellan Midstream Partners for a potential new storage terminal along the Houston Ship Channel for the storage and handling of crude oil, refined products and ethanol. As part of the agreement, the parties will work on a feasibility study to assess the development of a deepwater storage and handling facility that would consist of tanks, barge and ship docks in a strategic location. “We have been operating in Houston for many years as a large chemical storage facility, which has very successfully developed into a versatile port of call for chemical manufacturers. We realise that with the shale gas revolution, because of the fracking currently used and the type of oil associated with it, that the infrastructure of the US for both national distribution as well as the use of refineries and ports is subject to change momentarily,” says Eelco.

“Both the storage industry and pipeline players are trying to find out what the future US market will look like and whether gas will be exported as LNG; we are no different there. We have acquired some land close to our existing chemical facility that will allow us to not only build storage tanks, but also develop very good water access with our maximum draft of 45 feet. We also have invested in logistics to enable access via train and trucks. With this move from chemicals into the oil and gas sector we wanted to do this with very strong partners, which is why we signed an agreement with Magellan. We have access to water, land and rail, while they have access to pipelines. It is a very strong combination,” highlights Eelco.

Having spent a lot of time attempting to predict the future market growth for gas, oil and chemical industries, the company benefits from a strategic scenario-based way of thinking, which has resulted in a clear view on how its network should be laid out and where terminals should be based. Aware of the increase in chemical gas storage demand, caused amongst others by production expansion in Europe, Vopak has ensured it is well positioned to capture additional flows for its customers through an expansion at its terminal in the port of Vlissingen. The additional 36,800 cubic metres will enable the terminal to minimise an expected global imbalance of certain chemical gases for its customers, while also continuing its reign as the leading LPG and chemical gases hub in Northwest Europe.

“We have been storing propane and butane for several years in Vlissingen and expect the overall trading of these products to increase. If you look at the world, it is most likely that the Middle East and North America will be strong on these products, while Europe and Asia will be short,” explains Eelco. “As a company we will try to play our role in the potential increase of propane and butane, which makes this recent development at the terminal a natural extension. If you look at the size of the terminal, it is currently 130,000 cubic metres, so adding an extra 36,000 to 37,000 gives you a real sense of the expansion, just short of 30 per cent.

“We are pursuing similar opportunities for propane storage globally, with South East Asia an area we are keen to further develop the storage of these products. We have also recently built three propane tanks in China for one of our customers; the propane and butane markets are interesting to us and are definitely areas we will be monitoring over the coming years,” he adds.

Acknowledging gas as a cheaper fuel in comparison to alternatives, Vopak is a supporter of the increased exploration and production of it; as such the company is involved in the LNG Rotterdam – Gothenburg project, which involves the development of a small-scale LNG chain in both the port of Rotterdam and the port of Gothenburg. The collaboration between the ports will accommodate LNG supply for cleaner maritime transport and thus enable shipping firms to switch to LNG powered vessels that meet the stringent 2015 emission requirements for the Baltic, English Channel and the North Sea.

“A lot of companies are assessing the opportunity of gas being used for heavy duty transport for trucks or shipping; this could be inland shipping, barge shipping or deep sea shipping. We would like to develop infrastructure to facilitate those markets if they become economically viable and one area we foresee this happening is in Europe. We already have our Gate terminal in Rotterdam, which will serve as an anchor point to serve different ports and distribute LNG across different areas in Europe,” highlights Eelco. “This project ties in with the SECA regulations that will come into place in the Baltic Sea in 2015; LNG could play an interesting role in improving emission levels where sulphur emission above 0.1 per cent is prohibited. In preparation for this, we need to develop infrastructures for this market; with our partners Gasunie and Swedegas and the ports of Rotterdam and Gothenburg we are working together to get this project off the ground. We sent a proposal to the European Commission and they clearly support the initiative, which is why they gave the project a grant of 34 million euros to develop the chain, as a priority project for European transport infrastructure development.”

Following a huge level of investment in 2013, the future looks positive for Vopak as it aims to continue investing and growing throughout 2014 with infrastructure upgrades and expansions. Furthermore, the company is looking to further enhance its service levels to make sure it is the most safety conscious, efficient and effective firm in the market place. “Vopak has made tremendous improvements on safety and we have become very trustworthy in this area; we aim to improve our service offerings in layers, through working on hardware to ensure equipment such as the tanks, jetties and pumps remain all working well and are still what the market demands. Ultimately it is all about creating a sense of passion and belonging within our different terminals and develop a mindset within our staff to provide a service that customers expect, 24/7. We have a recognisable network and we also want to be recognised as a company with excellent safety and services,” concludes Eelco.