VTTI is a major player in the storage and terminal business. A 50/50 joint venture between the Vitol Group, one of the world’s largest energy traders and MISC, the major Malaysian shipping company, VTTI has 11 terminals, with a total capacity of six million cubic metres, on five continents.

Ambitious plans already underway will increase this capacity to at least eight million cubic metres by 2013, with terminals located at the world’s major trading hubs.

Each year, around 22 million DWT of shipping berths at VTTI’s jetties and it loads and discharges more than 6000 vessels. If its annual throughput of 30 million metric tonnes was stored in one litre bottles, it could build a tower that would reach to the moon – 23 times over.

Around the world, VTTI’s mission is to serve the energy industry in linking oil flows safely, efficiently and profitably. Therefore, it is located at the major shipping crossroads and anchorages of the globe. Whether the product is fuel oil or complex blends of gasoline, and whether the opportunity is in South America, the Gulf or the dynamic energy markets of Russia, VTTI is perfectly placed to help its customers optimise their business.

ATT Tanjung Bin, Malaysia
In the autumn of 2008, VTTI announced a major new terminal construction project in Tanjung Bin, Malaysia, which is, in fact, VTTI’s largest-ever single construction project. It is creating a world-class facility with an initial storage capacity of 840,000 m3 and the ability to handle all tanker sizes including partially laden VLCCs. The excellent regional location, next to the largest Asian hub of Singapore, will open up exciting regional distribution opportunities.

The land reclamation and soil improvement works have been completed, and the site has been handed over to the tank contractor.

Almost 60 per cent of the tank farm facilities have been achieved, including piling, tank foundation, and roadwork, piping fabrication, tank fabrication and erection. Over 70 per cent of the jetty marine structure works have also been completed. A section of the main jetty trestle – more than 500m long – has been handed over for pipe launching.

VTTI is also fostering excellent relationships with the villages that surround the site, through the project site developer Seaport World Wide Sdn Bhd. It has organised several events, including hosting a lunch for 450 local people, and making gifts to their communities such as: 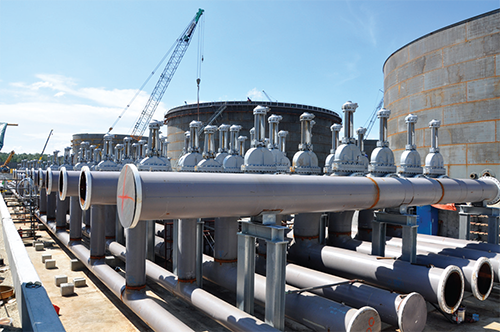 In addition to this significant project, VTTI is also working on an ambitious oil storage facility in the Mediterranean. The venture is being backed by investment of some 200m euros and the location of Vasiliko, Cyprus has been carefully chosen: it is relatively close to the Suez Canal, it is politically stable and it has a western culture that blends well with strong ties to its closest neighbours.

When all three phases are complete the asset will offer capacity of 900,000 m³ across 43 tanks. It is being designed with VTTI’s trading customers firmly in mind – this requires a responsive facility that can handle HFO, distillates, jet A1 and gasoline products, coupled with a multiplicity of options for fast turnarounds, bulk-breaking/building and of course blending.

When this terminal goes operational, VTTI will have a strategic foothold in the vibrant trading areas of South East Europe, Asia and North Africa. It will also establish Cyprus as an oil-trading hub for the first time.

The ground breaking ceremony took place in January 2011 and all core project team members are in place. Civil and ground works have begun and VTTI has committed to the fabrication of steel plates for the tanks. The engineering activities for jetty construction are also being progressed. The target now is to award the lump sum turnkey contract for storage tanks and jetty works in summer 2011, for start-up of the terminal in early 2013.

Alongside this VTTI is focused on acquiring land for a Phase Two expansion, and accelerating the schedule. It has become clear that there is significant demand from local marketers, and VTTI is developing options, ranging from acquiring adjacent plots to land-reclamation on the shoreline.

One area that is always under scrutiny on major projects such as this is health and safety, and in fact, VTTI’s excellent safety record is a major source of pride for the business. On the ATT Tanjung Bin project, for example, a significant milestone was reached in March 2011 when, during a total of 1,161,414 man-hours, there was not a single lost time incident. This impressive performance reflects VTTI’s approach to health and safety across its entire business portfolio.

VTTI operates a network of bulk logistics assets around the world, and at all these locations it operates in a manner that is safe, environmentally sound and commercially advantageous for its customers and shareholders.

Not only does it comply with all local legislation but it is also committed to meeting the highest international standards of the industry, so although its terminals and locations vary considerably, its standards don’t. In every terminal, it is working towards a single, optimum VTTI standard. But although the destination is the same, the routes to get there vary considerably. The working cultures of, say, Latvia, Nigeria and Argentina could not be more different – and so, therefore, is the way its central framework is tailored and adapted for each. To support this strategy, VTTI commissioned Shell Global Solutions to carry out an expert and fully independent review of its plants, and is now implementing upgrades and improvements to its processes accordingly.

In an established industry surrounded by players with long histories, VTTI is a relatively young company, having been formed in 2006. The VTTI network has grown rapidly, both by acquisition and expansion, as it seeks to give its customers the best possible competitive advantage. The company’s growth will be achieved on three fronts: expanding existing assets, acquiring new ones and developing green field opportunities. With a parentage that brings a rare and proven understanding of the commercial needs of oil terminal customers, VTTI is ideally placed to deliver solutions that are safe, reliable and designed to optimise commercial opportunities for customers.