Founded in 2006 by energy and commodities organisation, the Vitol Group, VTTI currently offers eight million cubic metres of combined storage space across five continents, an impressive number that is anticipated to rise to more than ten million as more projects come into play. Under co-ownership since 2010, following a deal with global leading international shipping and maritime conglomerate MISC Berhad, VTTI benefits from the firm foundations and strong expertise of its parent companies (Vitol owns 50 per cent and MISC owns 50 per cent) as well as direct access to unique market intelligence. Today VTTI operates in 11 countries, with terminals in strategic locations such as the Netherlands, Russia, the US, and the UAE, the latter of which being the home of the VTTI Fujairah Terminals Limited.

Located outside the Straits of Hormuz and sitting in the heart of the bunkering market, VTTI Fujairah Terminal is a major Gulf Terminal that already boasts close to 1.2 million cubic metres of storage. Serving as part of VTTI’s wider network of terminals, it has grown year-on-year since its formation through significant expansion. “Since September 2013 we have had several medium and small projects to improve our flexibility and maintain our competitive edge,” explains general manager, Siavash Alishahour. “There have been huge expansions in the storage tank terminals via new market entrants that made the terminalling business in the region very competitive and we have also seen significant expansions at the Port of Fujairah in order to cater for the booming storage capacity in the area.” 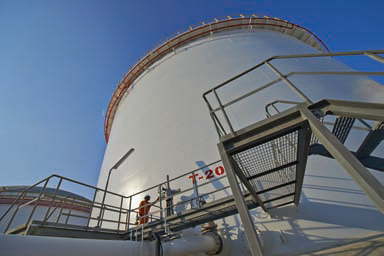 Having trebled its storage capacity since its formation in 2007, the terminal is now looking to find various opportunities to capitalise on its unique position on the Indian Ocean and the Persian Gulf. Moreover, it is directly adjacent to the shared oil berths of the Port of Fujairah within the port, which enables efficient product-handling operations at the terminal, in comparison to any other terminal in the port. Another benefit for customers is the terminal’s jetty flexibility and deep waters, which allow VTTI to accommodate all sizes and types of vessel; it has seven berths, with a maximum draft of 54 feet at lowest low tide. The terminal can also offer facilities for all different types of products, which means the terminal’s core activities are transportation, storage, loading and offloading of oil and petroleum products for its wide customer base. For the pipeline inter-terminal transfers, the terminal provides a direct connection to VHFL, GPSChemoil and GPC terminals, however the VTTI terminal is connected to all other terminals via the Port Manifold.

Connected to the Fujairah Refinery Limited (FRL) refinery and serving the refinery, which processes up to 80,000 barrels per day of a combination of heavy crude oil and condensate, the terminal operates 47 tanks and boasts a total available storage capacity of 7.4 millionbarrels/ 1,180,000 m3. Products handled at the terminal include crude oil, condensate, jet fuel, naphtha, gas oil and fuel oil.

Keen to maintain a high quality service, VTTI regularly undertakes maintenance projects around its terminals, and announced the completion of overhauling and refurbishing of 21 tanks and has recently managed an upgrade of refinery unit – 700 at VTTI Fujairah Terminals Limited in November 2013. At its peak the 46 day Unit-700 task required close to 500 people from 12 contractors, all working to stringent safety standards in a plinth area of 4500 m2. Work at the Refinery managed and operated by VTTI included completely replacing the underground seawater line, re-tubing heat exchangers, thousands of pipes, new instrumentation to ensure the terminal meets HAZOP recommendations and the refurbishment of 60 pump sets and 85 heat exchangers. All work was completed with no lost time incidents (LTI) and ahead of schedule. 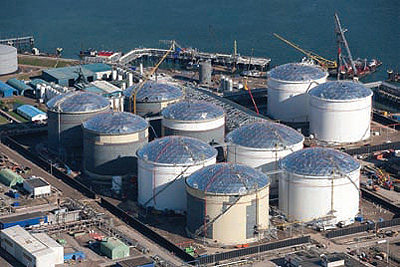 In February 2015 VTTI announced a contract win for VTTI in Fujairah; as part of the longterm, exclusive storage and rental agreement with a major energy firm, the terminal has embarked on a critical expansion project, involving the construction of a new 430,000 cbm tank farm of heated, black oil K1 tanks. In addition, VTTI will provide operational and logistical resources for on-site processing. “VTTI Fujairah is proud to be working with this customer, a multi-billion euro, publicly listed energy company,” Siavash elaborates. “The major on-site construction project at is proceeding with the same urgency that drove its planning. It is a bespoke project, initiated on behalf of a customer, which was designed and agreed in just five months. Now, construction is moving forward around the clock, safely and efficiently, with the target of commissioning in April 2016.”

Three months later, in May 2015 the company announced that the bespoke construction project was proceeding at speed, with employees working around the clock to ensure commissioning begins on time. During February, the team began the kick-off phase of the project, with Singapore engineers working on completing designs and the procurement of materials.Construction of the tank foundations also began in earnest. In addition to the construction of the tank farm, the contract also includes the assigning of additional storage from VTTI Fujairah terminal’s existing capacity, which takes the total contract from 430,00 m3 to 475,000 m3; and the provision of operational resources for the multi-billion euro, publicly listed firm’s new, on-site processing facility, as well as all required connections to the terminal’s tankage.

With a major contract in place, the terminal’s activities should rise over the next few years as it not only serves this key customer, but also remains flexible enough to respond to its clients and handle any changes in the trading environment. “The priority for the next year is to focus on completing the current expansion on time and ensuring a smooth and efficient delivery to our client. For the future, we are looking at new potential projects that fit with VTTI’s business strategy and model as we are constantly assessing and looking for new opportunities to capitalise on our unique position and capabilities in Fujairah. Our vision as a group is to continue to grow and be a top three terminal operator worldwide,” Siavash concludes.